Tonight I drug out the Christmas tree and got it up.  There are even presents wrapped under it.  After having been so efficient and on my feet so long I grabbed the camera and thought BLOG THIS!!

The Christmas tree in my life has never mattered.  I have had real trees and hated them, the trying to get them even, the watering, the needles dropping out, the getting rid of it.  I have had fake trees and hated them, putting them up and bending all those branches, the backache, the falling over the whole entire tree because it is never solid at the base.  In fact, in recent years I have been thinking of buying a fake fireplace just so I can throw up a garland, decorate it and call it good!

None of this matters a whit because the tree is merely the backdrop for the ornaments.  Christmas trees are altars, of a kind.  I have altars everywhere in my house.  You probably do, too.  The ornaments are one of the major things that makes it feel like Christmas for me.  I often received them as gifts growing up, and especially after I left home and had my own home.  I often give my children ornaments as gifts, and when they have their own homes they will already have a starter set of ornaments that have been with them their whole, entire lives. 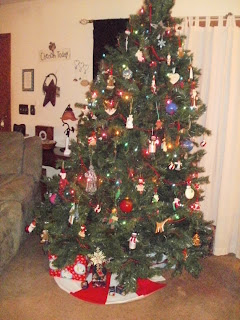 This is the whole thing.  Notice the way the tree leans to the right.

Christmas ornaments are tangible memories. Myriad memories of when you got them, times you have put them up, other ornaments this one reminds you of that got broken, and when, and by whom, and if mom cried when it happened.  There is the little ceremony of unveiling them.  Many of them you have seen just once a year, for a few weeks, since you were very small, and just a kernel of what you have become.  That kernel is still there, and you have put that snowflake on the tree as a child, the first Christmas after your Grandma died, the year you were home from college, and the first year you ever put it on your own tree. 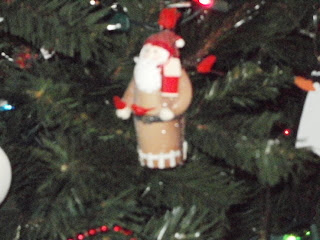 I got this ornament from my mother the first year I had my own tree.  Many of my ornaments are from her and my aunt Linda.  They favored wooden ornaments, often with moving parts.  Just as often Hallmark as Dime Store, back when we still had Dime Stores.  Should that be capitalized?  I'm tired.  These high energy days are about to kill me.

How you felt as sad as you did happy that year and how strange it was that you would be sad.  Telling yourself that it was just sentimentality when really in your heart you knew you were just mourning your old life because whatever happened from here on, and no matter how wonderful it would be, it would never be the same as it always had been before.  Some changes are irrevocable.  That's just life, but you should always take note and honor these changes.  They are the tapestry of your life.  (Why yes, Ms. King joined me this evening in taking measure of this year, as I performed the rituals that sustain us all from cradle to grave.  wink wink) 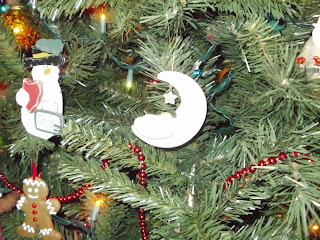 My first child's First Christmas ornament.  He got about 12, as he was born Dec. 1, and the other kids have always been jealous.  They say he gets everything.  I say it is not my fault.  But this is the first one I actually opened.  Is it not amazing that I remember that when I can't figure out whether to capitalize Dime Store or not?  You simply cannot get this kind of stuff with new ornaments every year.

I met people at college whose families bought different ornaments every year.  They had, like, "themes".  Different ones every year unless they really liked them.  These people lived in a city, and I felt very sorry for them.  I asked what they did with the old ornaments and they said they sold them at garage sales.  I made a mental note to check out their garage sales, but I am still astounded to this day by this concept.  It doesn't sound like Christmas to me. Themes are not for Christmas.  Rather, Christmas IS the theme.  Nothing new here, same old story, same old ornaments.  At least, at my house this is how it is.  How it has always been. 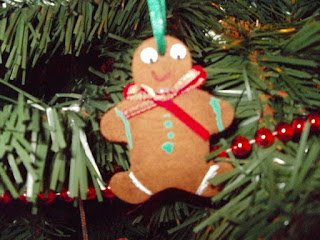 Isn't he cute?  He made me cry,but in a good way, as did this post until I added the captions.  I figure this is a new "theme" for blogs.  Read the italics and laugh, read the straight print and cry, and by then you've had a full day.  If you are going through menopause you can probably go out into the world without embarrassing yourself, as now your emotional roller coaster for the day is complete.  Onward Ho!  Stride forward with confidence that you at least will not start bawling in public.  Probably.

For instance, the ornament above was given to me by my friend Louise, when I lived next to her.  I turned it over and thought of her and she was close to me as if she was standing right next to me.  I thought of those days when we were just one house away and all our children were still home.  Everything has changed so much!  Almost all our kids are grown and she already has grandchildren and mine are yet to come, but I know they are coming and I think of them already, especially when I hold these ornaments. 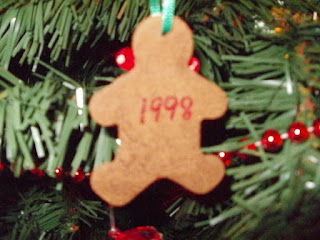 She made these by hand and they still smell like gingerbread.  I'm pretty sure at least one of the twins tried to eat them that year. They are not toxic. ;) We ended up putting the Christmas tree inside a playpen, and I moved all the ornaments up for a couple of years even after that.  It made for some strange looking trees, but all the ornaments were close to eye level.
Posted by Momiss at 12/02/2011 10:57:00 PM