We tore out carpet in the living room and hallway last Sunday.  I am shamed to admit it was Easter Sunday, but that is just the way things worked out. 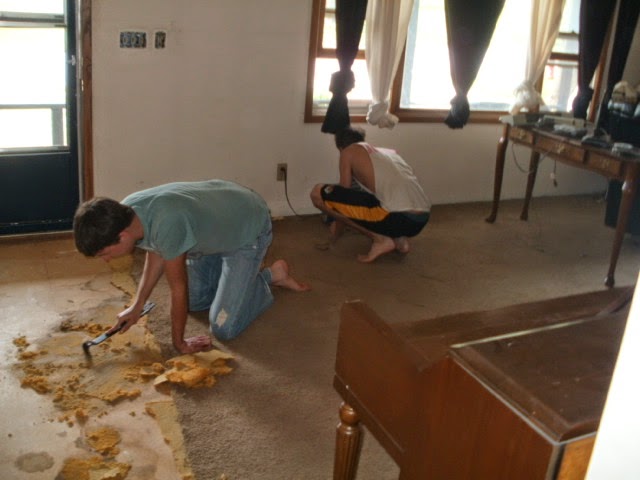 Real men at work again.  Man am I ever glad we all survived their early years.......


Our yard hadn't yet been mowed either.  While all the neighbors had beautiful yards and their families over to take pictures in their nice Easter clothes, we were carrying out big wads of carpet neatly duct-taped into rolls and putting it on the curb.  Then, for added fun, while the rest of the neighborhood barbecued, we swept up dirt, using the new snow shovel for a dust pan.  Sigh.  I guess we should just stand behind who are.  We can't seem to change. 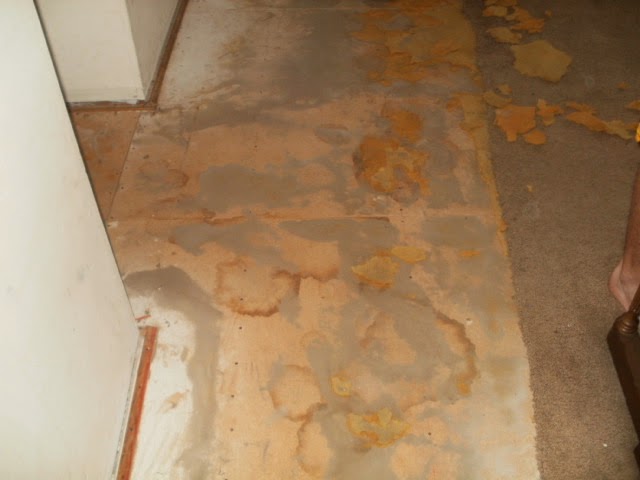 We played a fun game called "name that stain" and see the gray stuff?  DIRT!  We wrote our names in it with the shop vac for fun.  I am even kind of proud to report both boys are seriously anti-carpet now.

We had a shower for Charli the Saturday before and it is just the way things worked out.  Sorry neighbors, but I think it cannot be denied that we were certainly in the spirit of re-birth.  The worst and dirtiest early stages, to be sure, but the spirit, undoubtedly!! 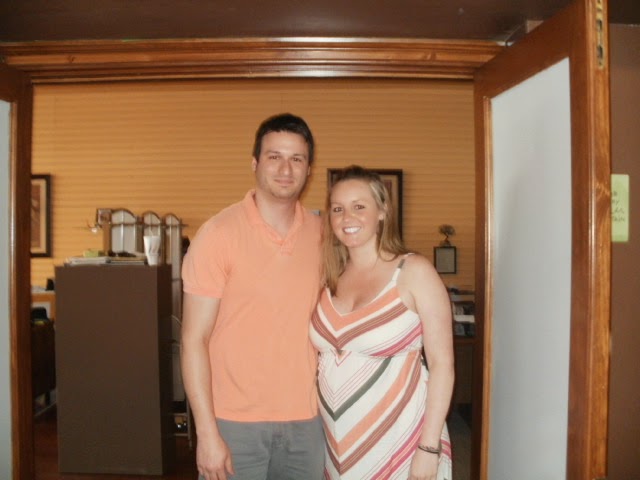 Is this going to be one lucky child or what??

On the upside, I have never been less embarrassed to invite people into my house.  I just open the door wide, smile, say "Come on in!  Everything is a mess!  Don't take off your shoes!"  I have found it freeing, to say the least.  You would be surprised how nice life is when you quit worrying about how your house looks......and smells.
Actually, I have seen big improvements in both of these areas already. 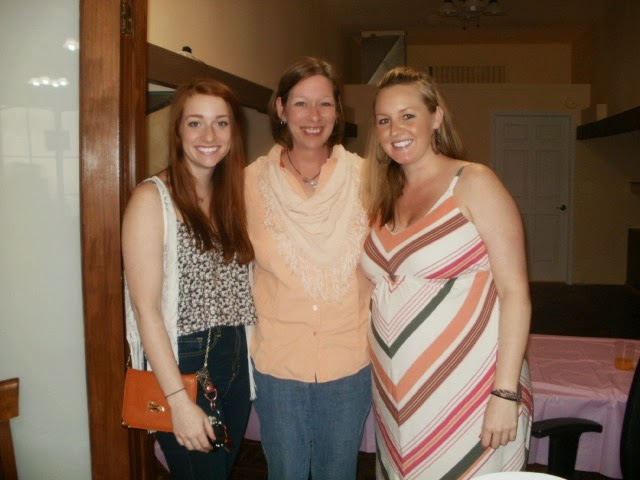 So I have been trying to decide on color for the walls.  I am doing beaded board (fake, cheap, and paintable) half way up, and I am 99% certain it will be a navy blue.  The flooring is in and it will be light.  Kind of gray, kind of honey, the kind of floor that just gives a general impression and light overtone that hopefully no one will notice much at all.  It won't show dirt or dog hair and I may well do my vacuuming with a shop vac from here on out.  Durable, low maintenance, cheap yet homey: this is my goal.  How can I fail?

I was stuck between a navy blue, a dark green and a color called Dark Vermont Currant, which looked to be very deep red or brown, or even purple, depending on what it was beside at the time.  But I think I'm too scared!!  So then I told myself that while you can liberally slop paint all over the floors of plywood now, at least pick a color for the top of the walls.  So I think I did.  For the kitchen I want a soft butter yellow, which is adorable with the navy blue on bottom, and then for the living room and hallway I think I'm going with a color that is called Flying Dove, which is a little blue but really looks like another version of white unless you put the navy blue beside it, and then it looks very light blue.  It all goes together and I'm so tired of trying to decide I'm just going to do it.  Frankly, I have so much stuff that hangs on my walls I am not even sure how much of the top will show anyway.  At the end of the day, I seriously doubt anything I could possibly do will look worse than this.  I mean, come on.  Nowhere to go from here but up! 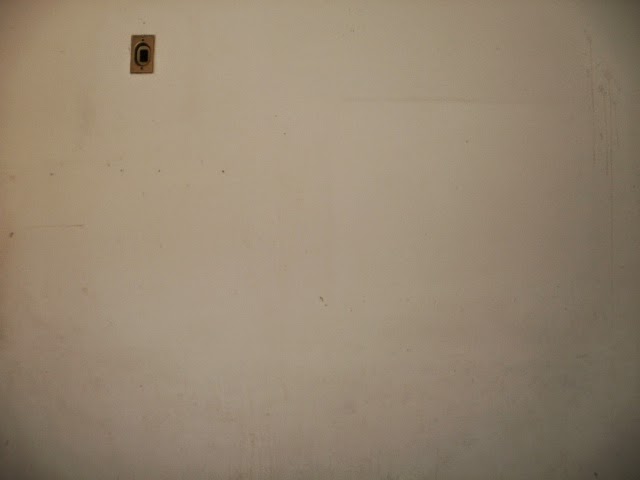 Seriously, folks, this is the TOP of my wall in the kitchen.  Can you see those stains?  Were they shooting cool aid in water guns or just water?  You decide.  I won't find out for another 6 or 7 years at least. 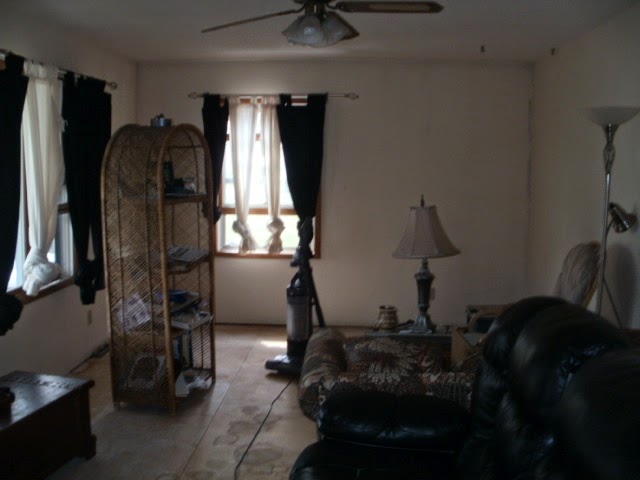 This is what we are living with now and to tell you the truth, it simply does not look any worse, and it smells 100% better!!

I could have had all this done this week, easy, but I was terrified of making a choice.  I remembered when my mother was building her house, and she was talking to the wife of the man who made her cabinets.  They were Mennonites, and apparently used colors on all their walls, because she said to my mom, in discussing another house, that their "walls were white, like your people's".  We collapsed in laughter when she reported this to me.

I have been wondering ever since just who are our people, and why are we afraid of color?  I didn't know, so I called my other mother, and we spent the next 4 hours drinking coffee and comparing colors and laying out floor tiles to compare, and danged if I haven't decided now it will be the Dark Vermont Currant on the beadboard.  In a shiny kind of paint, whatever that is called.  I forgot to ask, but it doesn't matter.  That is a detail that I will worry about later, when it's time.  Right now it's time to mud some walls and throw something that goes with it on the top half of the wall before we have to worry about protecting the new floor.

What color?  "Answer cloudy, ask again later".  Ok, that's a Magic 8 Ball answer but it works, and it doesn't really matter that much, because my walls will be full of stuff anyway and it won't show that much.  In the kitchen the walls will be a soft butter yellow that matches the currant color beautifully.  It will probably be a version of gray in the living room and hall, although I did see a kind of paint that included metal that was really pretty.  I liked it but immediately started thinking of all the ways I could mess that up and figured I would spend twice as much when I had to cover it up with white after it didn't work out.  I cannot escape the realism.  I've tried.  I just cast my mind back to the hot glue burns from the handmade Christmas gifts and decided not to go there.

Nowhere to go but up.  I just keep telling myself that.  Stay tuned for improvements as they come.  I'm just going to jump in and keep going, because soon I will have a grand baby to take up my thoughts and my time.  I just can't see the color of my walls taking up a lot of my mind in the future.  I'm very thankful to admit freely that I am just not that kind of girl.  I will be the girl with the gorgeous Dark Currant Simulated Bead Board.  You know, Charli's grandma.
Posted by Momiss at 4/27/2014 06:33:00 PM No comments: Links to this post