This has been a very high energy week for me.  I'm just about exhausted.  It's been supposed to rain since Tuesday, I've been frantically planting seeds and transplanting plants, and everything is ready for a good rain that has yet to show up.  Every night my hands are dirty and I have to soak in the tub to get the dirt out from under my fingernails.  It's been a great spring! 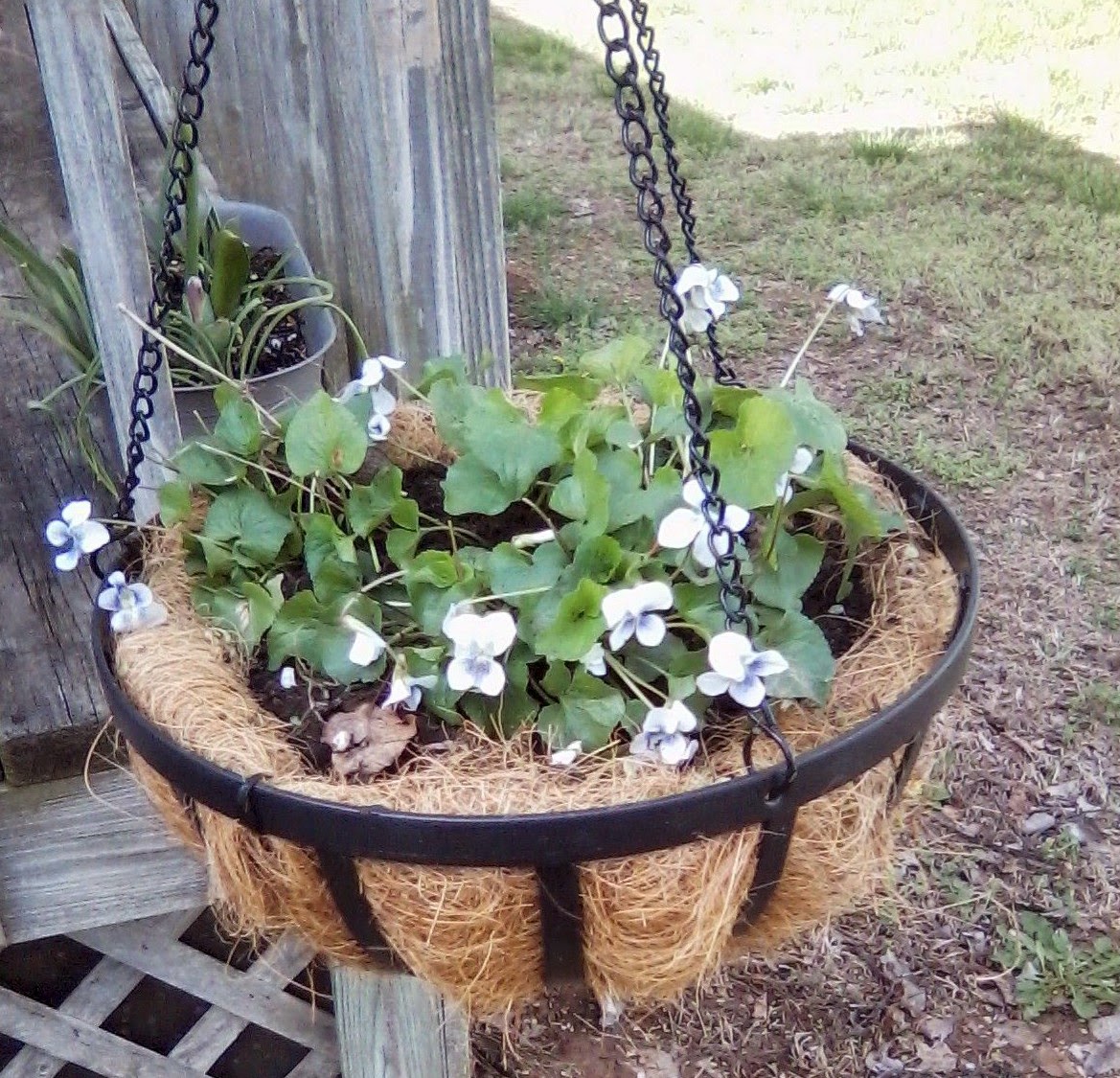 I grabbed another diaper and put it in the bottom of the pot hanging above the basket of bulbs.  The diaper went on the bottom with all the tab parts folded under.  Then it got filled with water.  To bursting.  I don't even think anybody saw me.  That's what I love so much about this place.  No one is ever out, and if they are, they are doing something that has their complete attention.  Adults!  So refreshing!

I tore off the top liner of the diaper, put in some potting soil, and then threw some white violets that were growing in the yard and had been dug up with a spoon by yours truly.  Is there anything prettier than a basket of white violets in the spring?  I think not.

I think it will work.  If it doesn't and the violets die there are more in the yard.  If they live I will put them closer to the house where the grass hasn't taken over yet and I plan to hold it at bay forever.  The less I have to mow, the better life will be for me.  Then I can pick something that I usually would not put in this basket because it always dried out so bad.  All because of a diaper.  Pause a moment and contemplate the impact this invention has had on our world.  It's kind of momentous.

So far I have one corner of a vast yard done.  It's gonna be a long summer but that's where the wild flowers come in.  I have Morning Glory and Honeysuckle planted all along the fence in back and the front porch.  You can't lose with those two in Southern Missouri.

Plus there is all manner of climbing vines that is really good ground cover everywhere.  I threw in some of that, too.

There are pots of Lavender, Sweet Peas, Lily of the Valley, Asters, and other wild flowers germinating at this moment in the barrels.  They do not need water, either, thanks to the diaper trick. 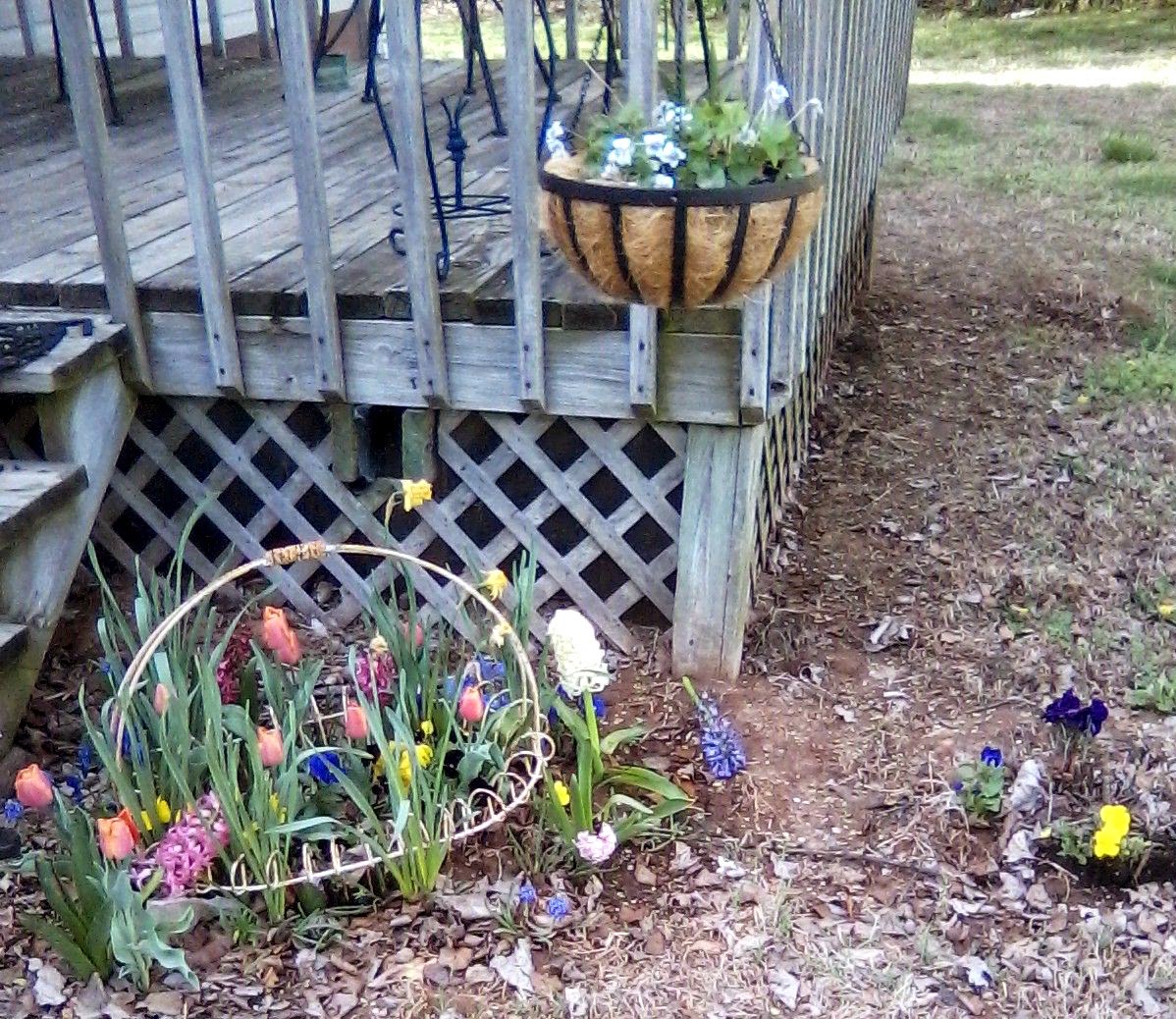 .
I also threw down, and I do literally mean that, seeds for Poppies, Bachelor Buttons, Four O'Clocks, Daisys, and only God himself knows what else.  There should be wild flowers and lavender all in front where the shrubs were.

I filled in a little in the front with some Irises that Janine, the heavenly neighbor, having an even more high energy week than myself, had dug up.  She had apparently experienced a fit of what I like to call "spring cleaning" when it happens to me, and it occurred to her that she was tired of "keeping all this up".  So there was a whole barrel of Irises that were old and all tangled up and I had to save them.  IF I didn't, she was going to throw them away!  Ock!!  That woman could run the entire world.  We should clone her.  The strips in the picture below are those long roll-out fabric strips are supposedly full of seeds.  We'll see. 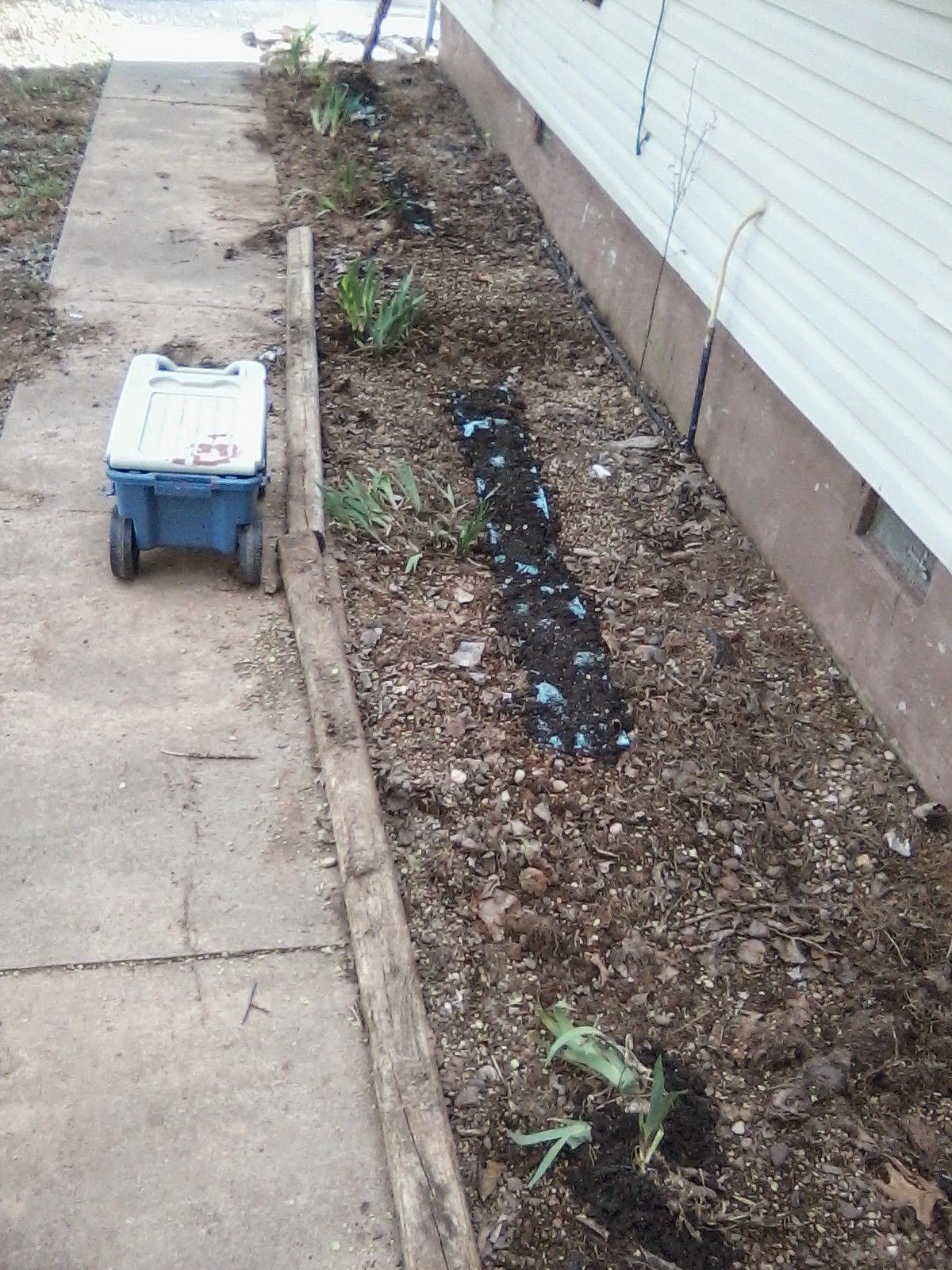 It looks kind of rough but if it ever rains we should see quite a display in a month or so.  Or not.  If it lives, it lives.  If it doesn't, it doesn't.  This is just life and seems to be easier and easier for me to accept as each year passes.  It's quite a relief, I must say.  This being old thing is all right with me so far.

That's also my handy-dandy little "roller alonger", passed down from my dear mother, who spent many happy days with her rear end planted on that little wagon, bringing forth life from dirt.  As does her daughter.  It is probably called a garden wagon or some more logical name.  Whatever it is called, you should get one.  You will never get stuck on the ground unable to get up with this.  Your knees will thank you.  *sagely nods*  The top lifts up so you can store your gloves, your trowels, your bug spray, whatever you like to keep with you.  And it even has 2 cup holders on top.  Did you know that is the #1 thing women google when researching new cars?  It is.  And whoever marketed this baby knew it.  I give them a solid A.

The lilacs exploded as predicted, and the air has never smelled so good.  Just look at all these blooms.  Impressive and welcome! 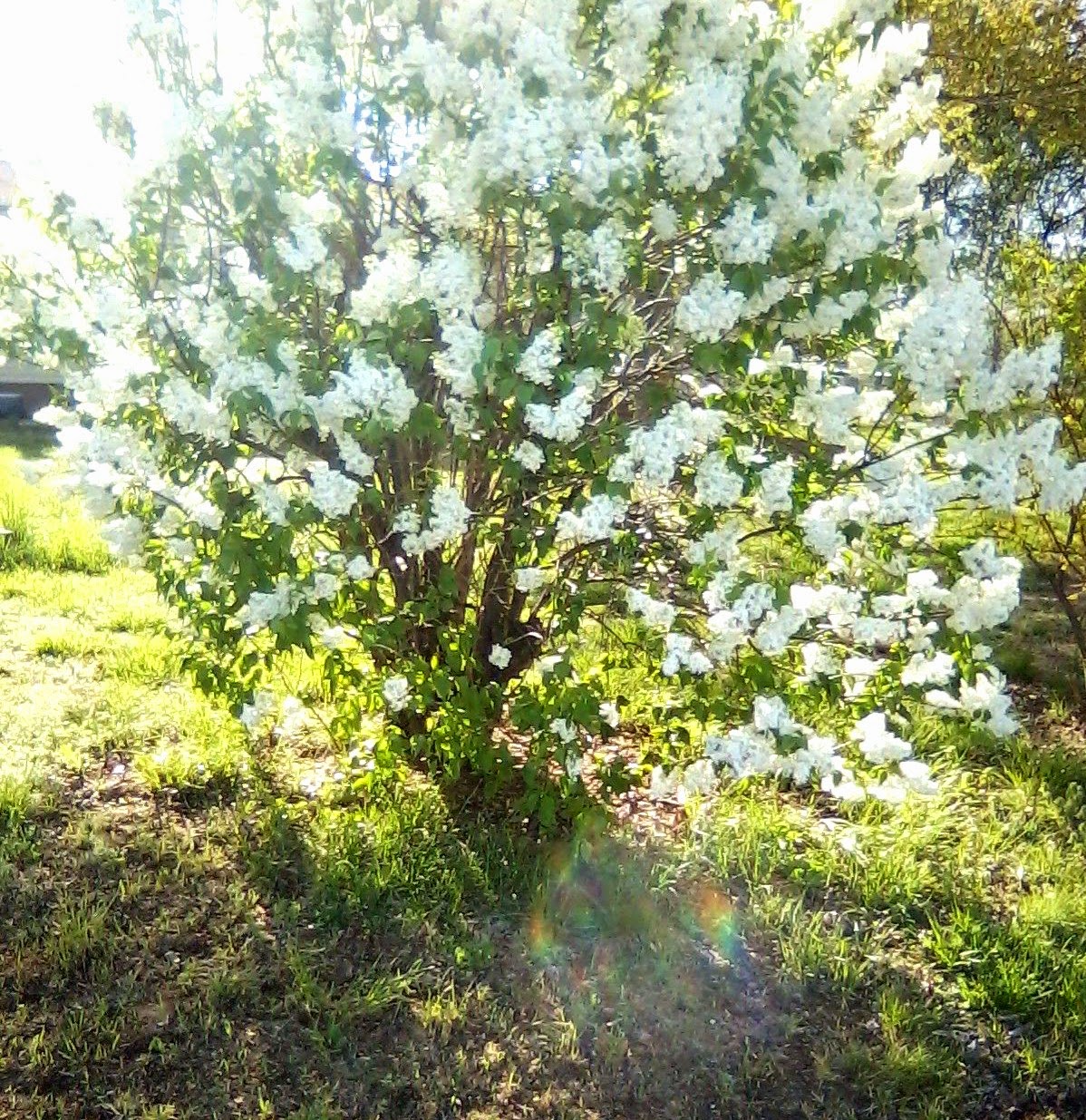 That reminds me.  I forgot to get gas for the mower.  It's outside time at my house.  Oh well, I don't have to worry about that right now.  Now it's time for another long soak in the tub.  Whatever tomorrow holds will be here before I know it.
Posted by Momiss at 4/10/2015 09:55:00 AM No comments: