A lot of the ornaments on my tree are actually the kids' now.  Every year I get them at least one, all alike if I can find them. 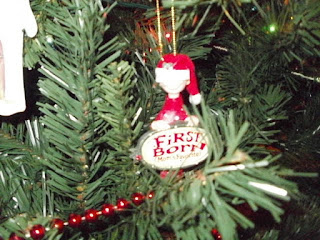 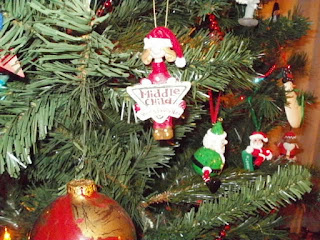 Everybody got one.  The girl even had red hair!  I was thrilled.

The undisputed favorite of the kid's is Santa in his hammock.  They used to fight over who got to put it up but in later years have settled for quietly moving him around to their own personal preference, without saying anything about it.  It's become our version of Find Waldo. 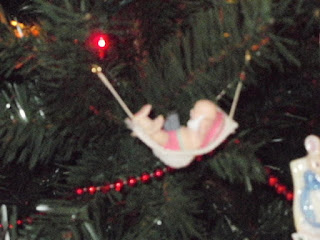 It's not a very good picture but you get the idea.  He's on vacation and has probably been drinking Mai-Tai's, so this focus is representative of Santa's own!  He's watching All My Reindeer on his little TV on his tummy, so focus isn't so important.  It's always easy to catch up with soaps even if you are blind drunk.

This is one that the kids always make a point of looking for and locating also.  It's kind of out of focus also but Santa has lost his clothes.  It happens.  I hear stories. 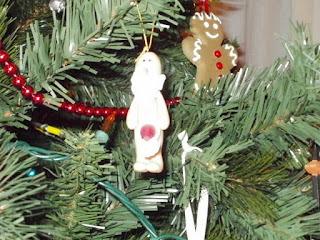 As long as Santa's on vacation and "fuzzy", I guess it's understandable that he might find himself naked except for his hat?  lol

Here is one of the more ritzy ones I have gotten for the Beautiful Redhead.  A a child, the more bling the better.  She was always partial to crystals and I found this one when she was 4 or 5.  The red and white striped ball to the right is from Chuck and Chirpy's December wedding years ago, and this year they are expecting their first child!  You can hang a tree with enough memories to last a lifetime.  Every year it just gets a little bit better. 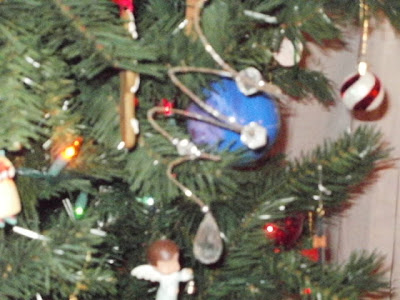 One last shot.  This features several wooden ornaments,more "hand" painted ones and the one that says Merry Christmas I got from my co-workers at Walsworth when I left there.  Also on the right there is a train.  We have two of these.  They were gifts to the twins and if you pushed something on them they actually sounded like a train.  Because of the loudly irritating sounds these made, they were very popular with the twins when they were small.  They were just as unpopular with the rest of us for the exact same reason, and this was the biggest game of all for a couple of years, as the twins were a little defensive about it and would throw screaming fits if they could not locate their "choo-choo's".  I forget who we got them from but I highly suspect it was probably my brother, who took his long awaited revenge upon me by buying my children noisy toys for years.  Before he had children of his own and I was helpless to retaliate, not that I would ever be so cruel.  Even he drew the line at noisy toys, though.  I should take this opportunity to thank you, dear brother, for never gifting my children with pets. 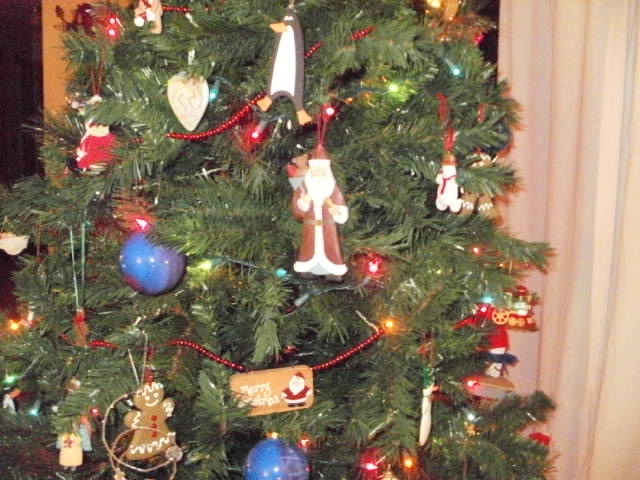 It took about 6 years for the "choo-choo" batteries to finally wear out.  No one in this house would ever dream of replacing them.  We have the memories of that sound and it is enough.  More than enough, until such time as we should have to suffer through it again with the grandchildren.

So ends my post about the "altar" of the Christmas tree.