When I got up Wednesday morning, the skies were clear and the wind was quiet.  I looked out to see the damage.  This is what I saw: 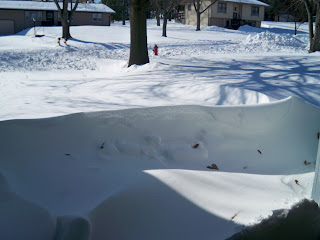 But you know how we are all a slave to our routine?  Since I was up, I thought maybe if I started in, I could get some of it dug out myself.  It's true, I had several cups of coffee in me at the time and was probably feeling a little bit like superwoman.  After all, the damage was done.  Now it was clear what we had to do.  The problem was, how to get to the snow without smashing it all down, and then, a bigger problem, what to DO with the snow, should I get any of it scooped up.  I opened the garage door: 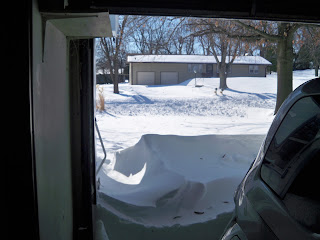 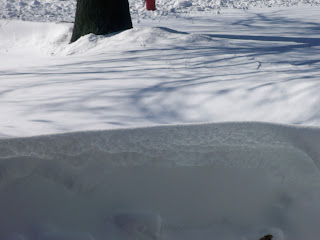 This one I took because the sun was coming through the snow at the top.  I don't know how well it photographed but you can use your imagination, what else are blizzards really good for? 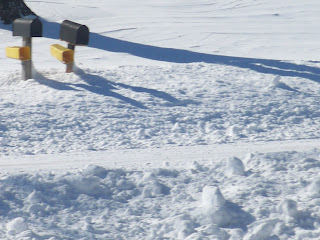 This is where the snow plows had made the street passable.  Unfortunately, this results, every time, in putting up a barricade at the end of all of our driveways.  Which can't be helped, but doesn't exactly add to our joy, as the end of the driveway will have be dug out many, many more times. 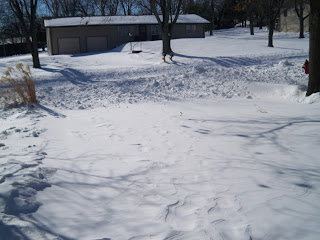 I called the neighbor to get on a list for a tractor to come and dig out the driveway, having quickly abandoned any thought of being able to make a dent in this myself, even with the Grand Finale's help.  I decided to start on the porch. 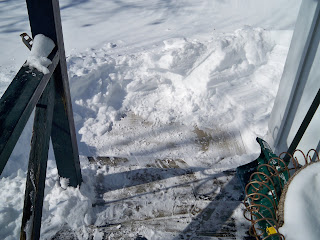 It took me about 45 minutes to do the porch and carve out a little place to stand at the end, so the tractor driving man could tell where the driveway was even supposed to be when he got here.  It was kind of strange, because I have never, ever seen things so quiet.  A few people ventured out and took in to digging.  I salute them.  They dug all morning long, and about noon, what do I see but this: 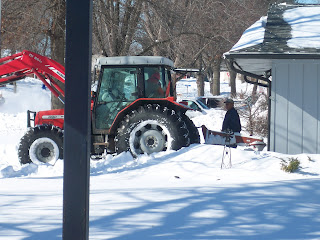 Yes, that is my neighbor and his son with his snow moving tractor.  He was poised to make many, many dollars this morning and I was so excited to give him some.  I was not the only one.  As the sound of the tractor came down the street, more people drifted out, checkbooks in hand to wave.  I know it doesn't look like it in this in the picture, but after shoveling my drive the tractor man went back to his dad's driveway and had to cross the yard to get my check.  He is a tall guy, I would say at least 6'2", and the drifts you see here came clear up to the place where God split him.  Pretty impressive, at least to me.  I would have had to try to get on top and try to roll over the top of it.
What?  Desperate times call for desperate measures, and this is a small town.  I do not doubt he has seem me do far stupider things than that.  We have known each other pretty much our whole lives.  Small towns are accepting like that, and if you don't live in one, you have my sympathy.
Even lifting you legs and putting them down was really hard, particularly since you had no way to really know where your foot would stop.  He is a brave man and I salute him.  I gave him a shout out on FB and I am pretty sure it only added to the money he would make that day.
Don't you just love America?

And farmers????
After some time, mostly trying to decide WHERE to put the snow, my porch looked like this: 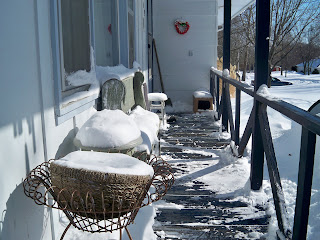 Notice the freshly flung snow in the middle there?  My snow flinging was a little too enthusiastic at some point.  So sue me.
And my driveway looked like this: 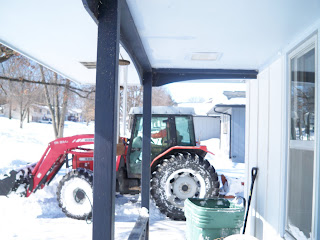 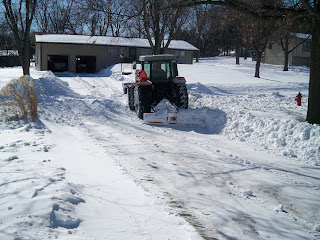 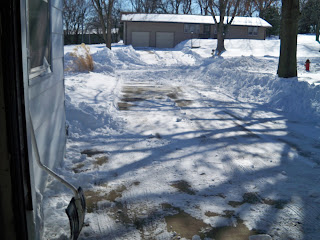 So we were back on track, except for the periodic shoveling of the end of the driveway.
﻿
Uptown, the center of the streets had huge piles of snow in the middle of them.  Street crews have been filling up dump trucks and dumping all the snow into an empty field over by a creek in the middle of town.  Yesteday I would say they had about the area of 1 block full of snow about 10 feet high.  Pretty impressive, I thought.
These days we have so much convenience in our lives that we have forgotten how to do things ourselves.  the old fashioned way.﻿ And I won't go into this further in this post, but it looks to me like there is a whole lot of people who either need to be told what to do, or are content to simply wait until someone comes along and helps them.  Not a good plan, folks.  Children can be forgiven for that kind of thinking, but not adults.  Take time to pay attention and do things right.  Look to the old people. And the farmers, who often are old people.   Quick, think of the oldest person you know.  Chances are they grew up working on a farm.
Take a moment and contrast the people in LA after Katrina with the people of IA after the horrible flood they had up there.  You never saw the people from IA waiting for anybody to help them.  They all got out and started cleaning up.  Go ahead, google news stories from both events. I encourage you to research and verify, and then decide for yourselves.
I think we are coming to a time where we are going to have to depend on ourselves and think ahead in order to have a good life.  I could be wrong.  I hope I am.  But it never hurts to talk to the older generation and to LISTEN to them.  They know an incredible amount of things that you may think is obsolete.  You thinking that is just proof that you are still in your youth.  Enjoy it, but think for yourself and think to the future.  You never know when a blizzard will come along and shut everything down.  And a blizzard may just be the most you can hope for.
Posted by Momiss at 2/05/2011 09:55:00 AM No comments: Links to this post