It is that time of year when, if you live in the Midwest, you start to think the weather is going to get warmer.  I say you think the weather is going to start to get warmer because the sun is out longer and the breezes are no longer Arctic winds.  Most of the time.  The fact of the matter is that Mother Nature is teasing us.  She knows we are tired of the cold and the dark.  She also knows we are desperate enough to believe it will change pretty quick despite years of evidence to the contrary.
If I had a dime for every time I've torn the plastic off the insides of the windows at the first sign of the weather warming up, only to be fighting an Arctic blast a few weeks later, I would be sitting pretty.  Have you ever tried to figure out how to get a quilt to stay over windows to keep out a draft?  If you live in a city and think a "quilt" is something you order out of a catalog and weighs less than 25 pounds, you should know that your education in this area had been sorely neglected.  I know they are pretty!  I know they are expensive!!  But that does not make them a real quilt, my dear.  The only way you can get a real quilt to stay over windows would be to nail it, and that would be sacrilege with a real quilt.
It's that time of year when I know I should start spring cleaning, but I would much rather sit in my warm bed and pop bubble wrap instead.
What?
You don't pop bubble wrap in bed instead of facing bleak realities?
You should try it.  You will like it.  You will want the smaller bubble wrap, trust me on this.  It is much, much cheaper than therapy, assuming you even live in an area where that is geographically possible, which I do not.
This time of year I am lost in the purgatory of not being able to see the end of the tunnel or a justifiable reason to look very hard for it.  I am reluctant to change my winter routine of staying warm and going to bed early.
Especially if I have bubble wrap on hand.
Methodically popping bubble wrap while mulling over situations in your life results in more logical thinking and calmer heart rhythm.
No, I don't have any science (!) to back that up but if you try it you will see for yourself.
It also leaves plenty of time to notice how many cobwebs have accumulated over the past several months and make a plan of attack, once you decide to hit it again.
Or not.
It will come.
I will know by the bright sunshine that will illuminate the cobwebs in the corners and the marks on the walls.  It's been a long winter, and somewhere along the way the Grand Finale decided to put some nails in the walls. They also had some wild swings which resulted in two (2) perfectly hammer shaped holes in two (2) different rooms.  That I did not ask about the details says a lot about the state of my mental health this winter.  Actually, it says a lot about how mothering tends to wear one down, but I'll save that for another post.
It's not all bad.  I used to get really upset and cry about stupid stuff like that.
Which actually makes me laugh real laughter now.
Live and learn!
For now, let's concentrate on the fact that it is spring, almost.  Despite the temperature, look what I found poking their little heads up today: 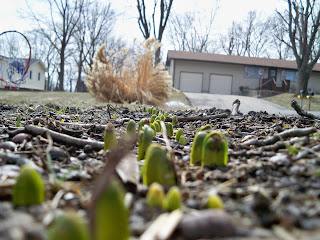 These are surprise lilies, naked ladies, whatever you want to call them.  I used to get excited every year when this part came up.  Because I forgot that this is just the green part and means nothing except at some point there will be very fast growing flowers with NO LEAVES, and whenever that point happens, it will be a surprise.  That they will probably by buried under 2 inches of snow by Saturday will affect their progress not at all.
Also, 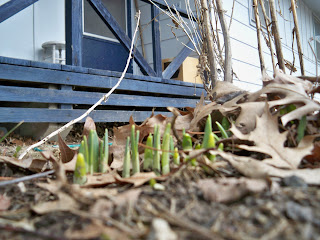 These will be jonquils and will not let us down.  They will have pretty yellow flowers soooon, very soon.
And here is a shot that I took of the full moon last week that made SHADOWS as long as it was out.  How clear and beautiful were the nights that this moon lit!  I certainly hope you took the time to notice and appreciate it.  I know I did. 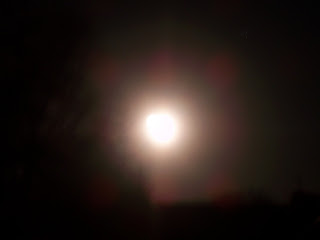