I did a rather dark piece last year for Father's Day, and this is the other side of that particular tunnel for me. It was hard to do, but I'm glad I did and I have felt rather badly about just leaving it there, because of course  no broken heart just stays broken.  They mend in all kinds of interesting shapes, none of them perfect.

The other night I was lamenting the fact that I still haven't gotten through the Beautiful Redhead's childhood toys on her shelves, and I spied this guy.  The whole world stopped, and my mind started whirling, and I ran to get my camera and even managed to take some pictures in focus. 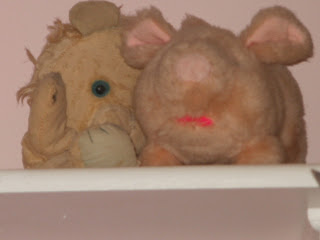 This is Leo, on the left.  Leo is my first real love.  He used to be a lion with a music box.  I have no memories, or pictures, of Leo when he still had a mane, or fur, or whiskers, but he has a scar from where my mother had to perform surgery on him to remove the music box. ....after she had washed it.  Laundry would be a demon my mother would wrestle all of her life.  She fought the good fight but could never overcome what she called "the bleaching gene".  I have no memory of the music box and as far as I know, I never missed it.  I was just glad he was all right, sewed up tight and still with me.
He used to sleep with me every night.  I had a lot of stuffed animals that slept with me every night, and it caused me a great deal of anguish trying to decide how to arrange them in my bed.  I had room for about 3 rows of stuffed animals that I could fit in my bed, and I worried that only the ones on the top row would be able to breathe.  I tucked the covers under the arms of those on the top row that had arms that would bend.
My mother pointed out that stuffed animals didn't have to worry about breathing.  She *may* have even said "um, honey.....you do know they aren't real, right?" (wondering, no doubt, about the definition of "obsession").
I knew this in my head but it was my heart that was the problem, and I knew this, too.  I was about 7 when we had this conversation/revelation.
Even then I was more worried about my skills as a mother than the more practical things, like the fact that my "babies" did not breathe.  My mother did not believe imagination was a thing to be squelched in children.
But always Leo was beside me, closest to me.  I loved him the best of all.  Leo had been with me since I was a baby. 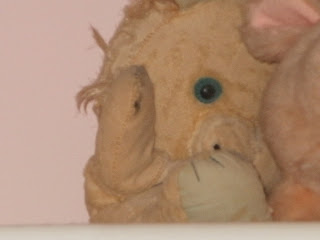 Soon after we moved to this house in 2001 and put up the shelves in this room, I must have come across him while unpacking and put him up here for safekeeping.  Here he has sat, next to the pig that my daughter loved when she was 3, for 12 years.
There is a black spot on his hand from where I threw him up, high in the air, after being warned not to do that again by Big Grandma, who was trying (desperately) to spray paint some TV trays (Remember those?) when he landed smack dab in the middle of her fresh paint.  Big Grandma was mad!!  I was in trouble!!  She did not spank me.  Maybe because I was almost as tall as her, but maybe because she didn't have to.  I knew better than to do it but I had not realized I would be putting Leo in jeopardy.  I was maybe 8.  You might think that's kind of old to be carrying around a stuffed animal but it would have been the summer my dad left.  Leo was there for me.  We went through it together.  Where I went, so did Leo. It threw both of us  into a panic thinking that Leo had been mortally wounded.  Not to worry, most of the paint came off, and what remained we both thought added character.  Big Grandma had her demons, but laundry was never one of them. 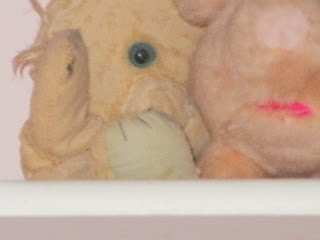 When something terrible and irreversible happens to you as a child, it is right before sleep that your heartache will find you.  Once you are alone and everything is quiet, it will well up out of you.  It becomes a daily ritual.   During the day you can "not think about it", and keep your mind off of it, but it knows where you sleep.  Every night Leo slept crushed to my chest, and every morning there he would still be, and on I would go.
As a teenager he was always on my bed, and usually slept with me, but you will be glad to know that I did not have to carry him around anymore.  I did not cry every night anymore by then, either.  The self-centered-ness of puberty had staked out that ground, and many nights I spent obsessing over acne or what to wear to the dance instead of crying. Some time around the age of 18 I realized that I had not been crying every night for quite a while.  My heartache did not come for me as often, but when it did come for me, Leo was still there.
I got married and moved away from home, Leo tucked into my cedar chest from Nana along with other treasures and keepsakes.  I got divorced and moved back home, went to college, had apartments and parties, had jobs, got married again, had kids, the whole nine yards, Leo was with me always.  Tucked away in my cedar chest until my children got old enough to be careful with stuffed animals.
Sometime in my early 20's, I realized that it had been a long time since I had cried at all, or  felt sad, or even thought much about my heartache.  It was a shock, and I thought I outgrown it.  It wasn't done with me yet, but I treasured the possibility of peace, and started working toward it.
When I was pregnant with twins and at a psychologist's office for one of my children (I thought), I surprised and embarrassed myself by bursting into tears when the man asked about my parents.  Then I got mad at him when he said it was obvious I had some "issues" with that.  Not outwardly mad, (Thank you LORD), but inwardly mad, which is less embarrassing but more humiliating, on a personal level.  That was when I finally broke down and asked for help.  From God, not the psychologist, nice man though he was, he was still, well, .....a man. Plus let's not forget my prejudice toward taking pills.  I'm against it, generally.  Let's just say I had issues in more than one category but do not worry, God could handle them all.
Then the years flew by and one day I saw Leo on the shelf for the first time in such a long time that I had almost forgotten Leo.
HOW could I forget Leo, who was my first "baby" and my staunchest friend?
And I realized that Teddy Bears are really just like baggage.  It was an epiphany.
We carry them so close, our heartaches,  they become so much a part of us, that the thought of getting rid of them hurts as much as cutting out a part of ourselves.
We (I) often (used to) sit around whining about our burden but eventually your realize that YOU are one who is crushing it to your chest, holding on so tight that you are never going to be rid of it until you let go.  It may have even grown into you by then, like those poor people who weigh so much they die in their chairs and only then does anyone know their skin has fused with the fabric!! It's ugly, but take heart, because it's also easy.  All you have to do is let go.  That's it.  Just let go.  One day your head will know that it's time and it will be all right to let go, but your heart will not be convinced.  Listen to your head.  Sometimes, the head must rule.  When it's for your own good, and your heart is paying the price, listen to your head and just let go.
Nothing will happen.  You may think at least a good, resounding cymbal crash at least, is called for, but odds are it will be quiet, and nothing will happen.  No one else will know a thing.  No one else is inside your head, seeing the tragic opera that plays on a constant loop, unless you tell them.  The only change will be the peace in your heart, which will most assuredly make itself known in your face when you smile.  You will be better than you have ever been.  More, even, than you have ever been, and grateful for the lessons you learned on your way to that place.
I have had quite a journey with both Leo and my baggage, but unlike Leo, who I kept safe on the shelf, at some point I cut my baggage loose and let it float on down the river of time.
Perhaps the hurt finally scarred over.
Like arthritis, it didn't hurt all the time, but when it rained there was a deep ache I could live with but not forget about.  Dan Fogelberg did a song that has always haunted me, that describes it much better than I can write, Hard To Say.