I got to spend a few days with my bonus daughter to watch Rosie.  It was heaven on earth for me.  I have missed seeing her like I did Abigail when she was small.  Rosie is a very happy child.  Rosie and her Mimi got some time together and we had a very good time.

The first morning when I got there I had to bribe her to take a bath.  The bribe I used was her phone.  Abigail and Rosie have a phone.  I did not know this but Rosie led me right to where it was plugged in to charge.  I had no idea how to run the phone, but Rosie did.
After her bath she also picked out her own outfit.  It had a sweatshirt that zipped up the front.  I started to zip it up for her but I had forgotten Rosie is 2. 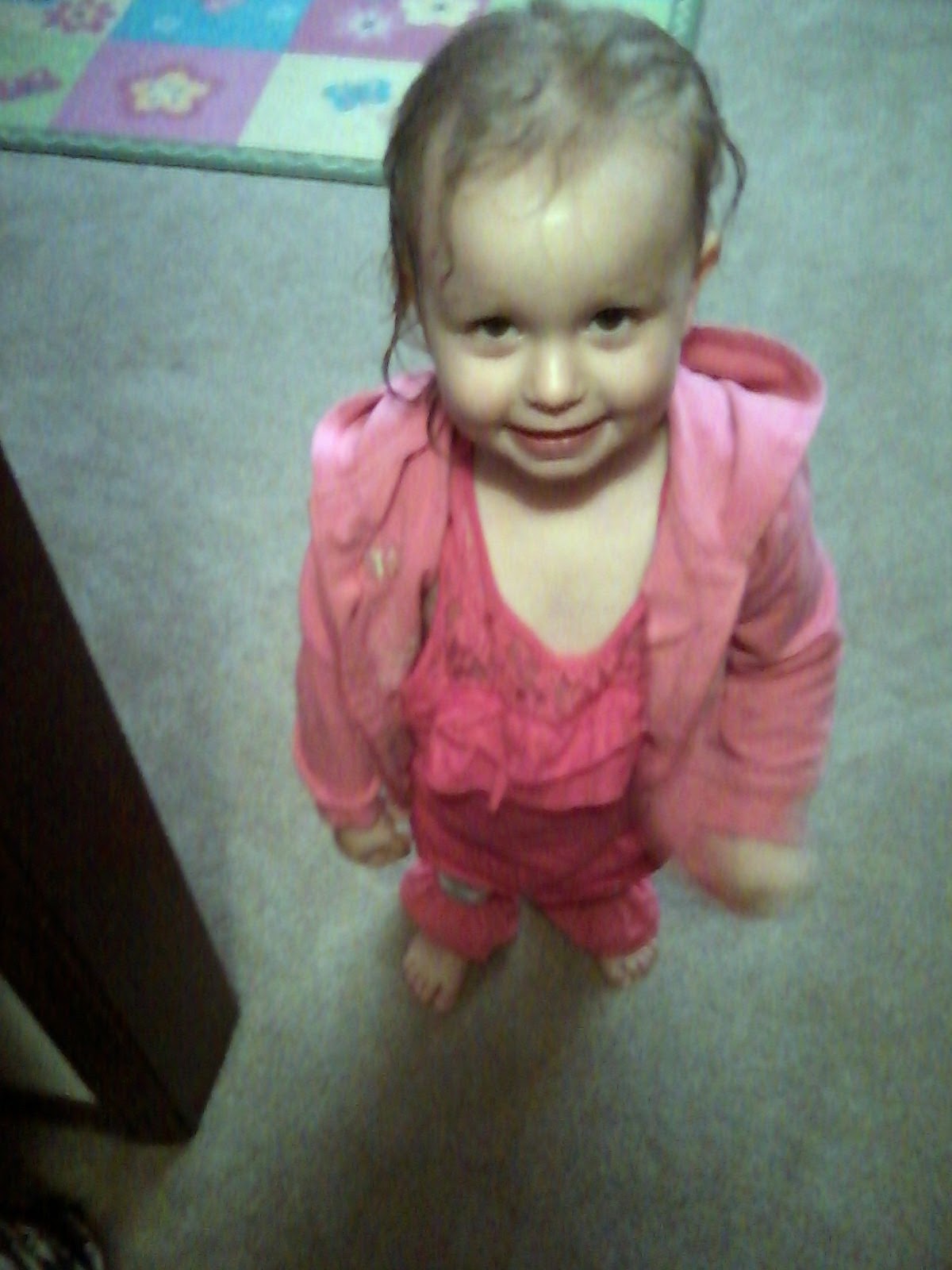 "I tan do it mysef", she informed me, resisting all help I offered. 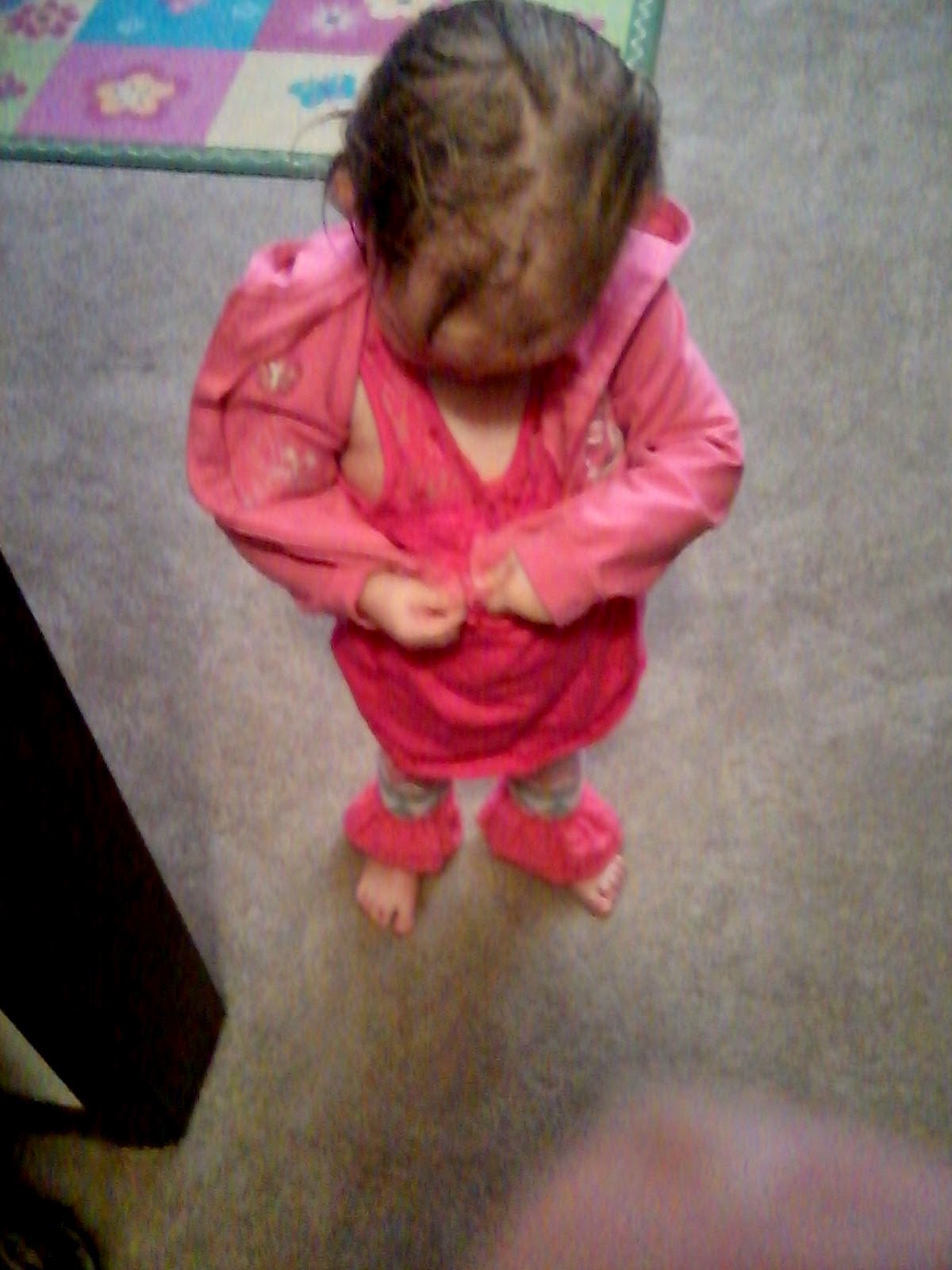 And so she did.  She could also brush her hair herself, and that was fine with me.  I have yet to forget the stress that combing Abigail's hair put me through.  No one would see us anyway.  I learned a long time ago not to sweat the small stuff.

Rosie showed me everything, inside and outside the house.  She quickly forgot about her phone when I mentioned "outside". 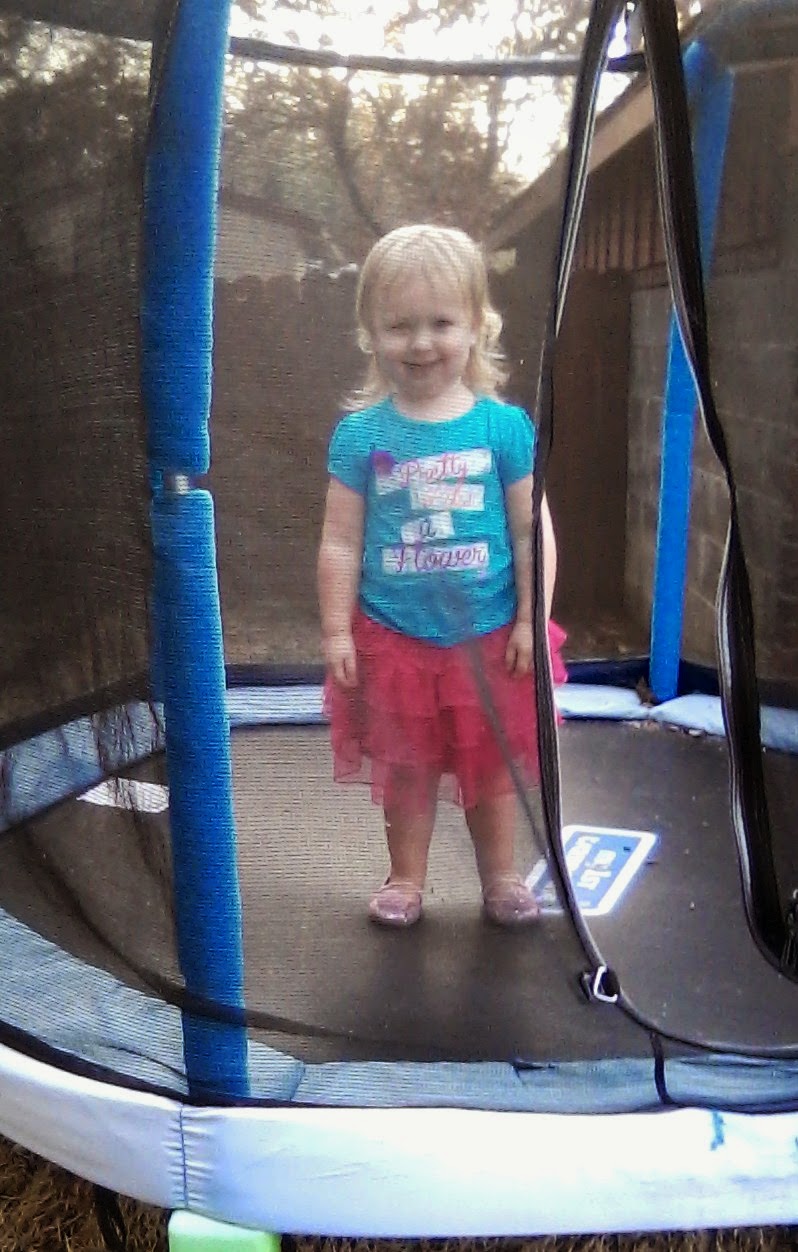 Outside I discovered that Rosie is the Jumping Queen of the Trampoline.  With a tutu and glittering shoes, she jumped off and on all day.  She wanted me to jump with her.  I told her I couldn't because I'm an old grandma now and when I jump on trampolines it makes me pee my pants.  Just a little bit.  She solemnly took this information in, repeated it after me, and did not ask me to jump again.

The second day I decided to get in there and clean out some sticks and leaves that had found their way into her trampoline.  She looked at me, dead serious, and said "Don't pee."
"What?", I asked, looking at her in confusion.
"Don't pee", she repeated, her eyes not wavering.  I had forgotten all about telling her that the day before, then I laughed when I remembered.
"I won't", I assured her, and so I just sat there, picking up sticks and leaves, while she watched me and made sure I didn't pee on her trampoline.
Two year old's have minds like steel traps.  I can't remember the last time anyone listened to me like she does. 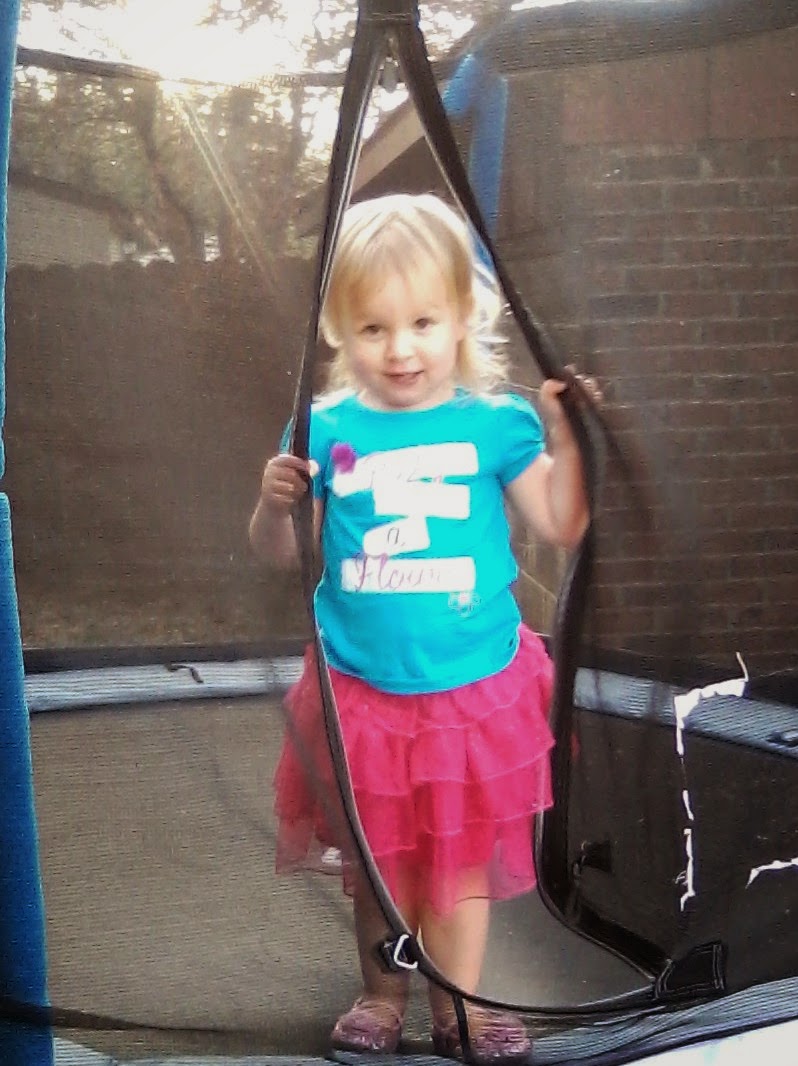 She gave me the tour.  We identified several types of wild flowers growing in her yard and pulled weeds out of the cracks between the tiles.  She led the way to the pool. 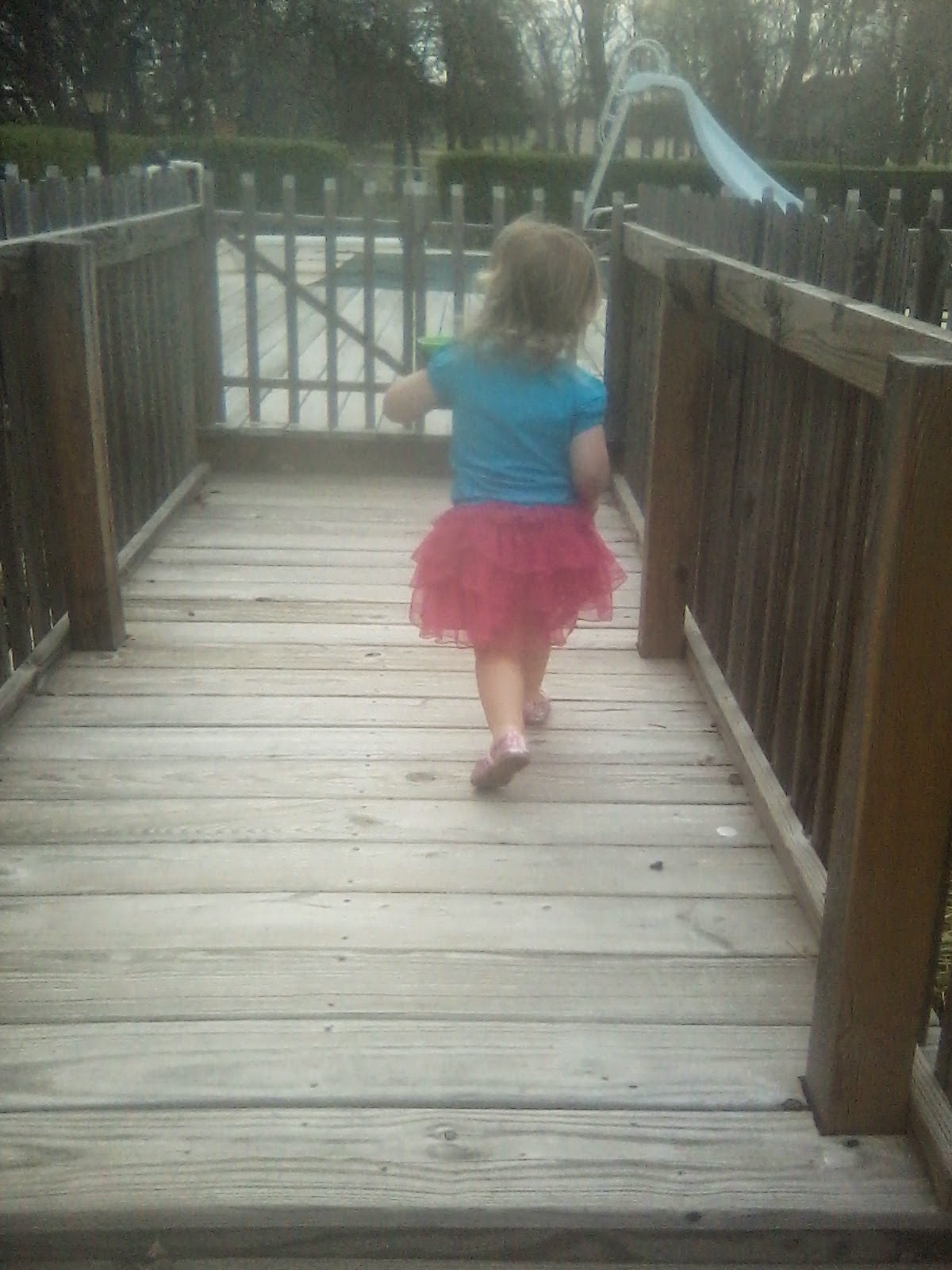 She told me not to get in the water.  I said no problem, that it wasn't time yet anyway. 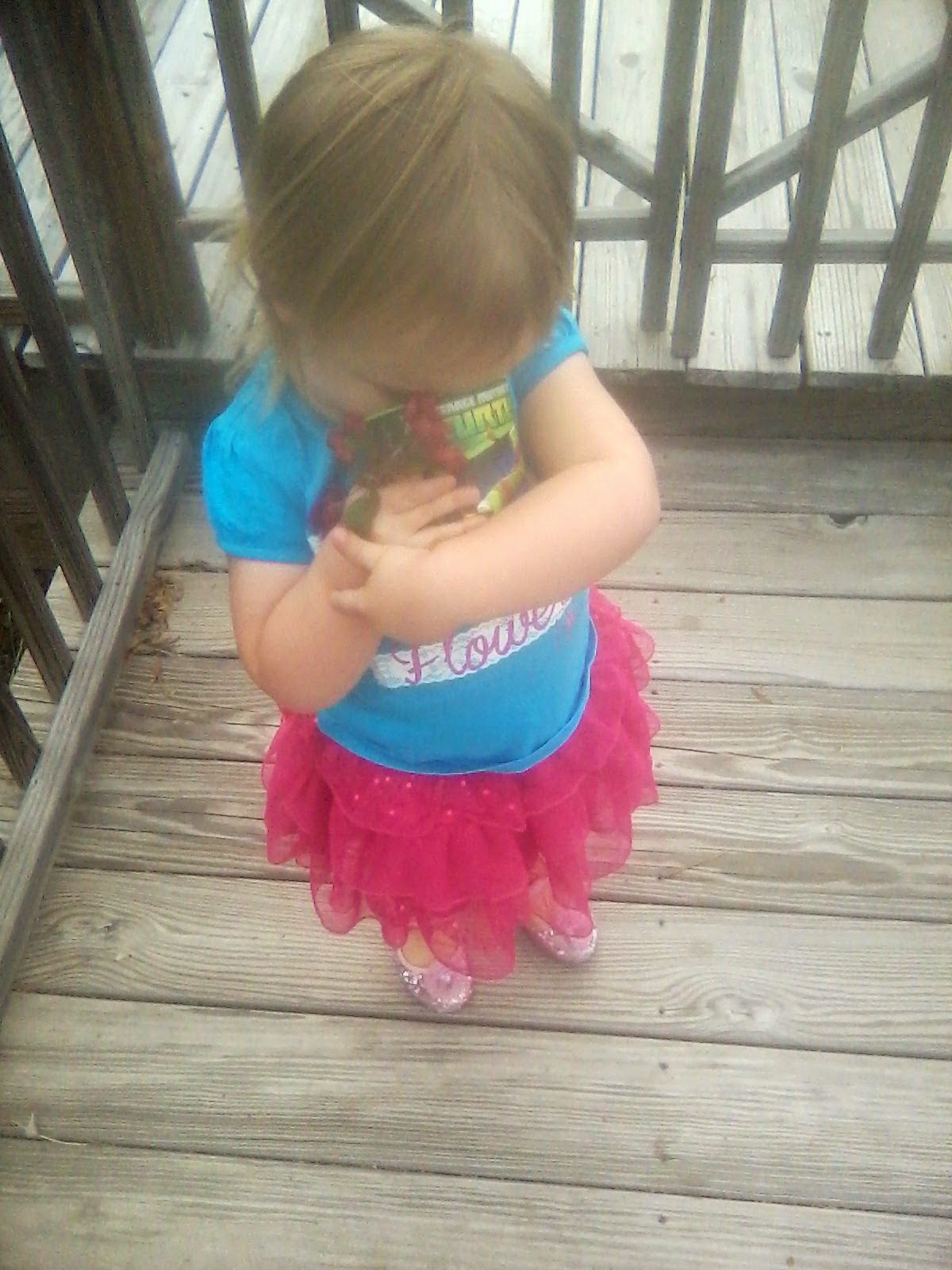 I held her up and let her pick some blooms off a tree.  She thought they were very beautiful, and smelled good, too. 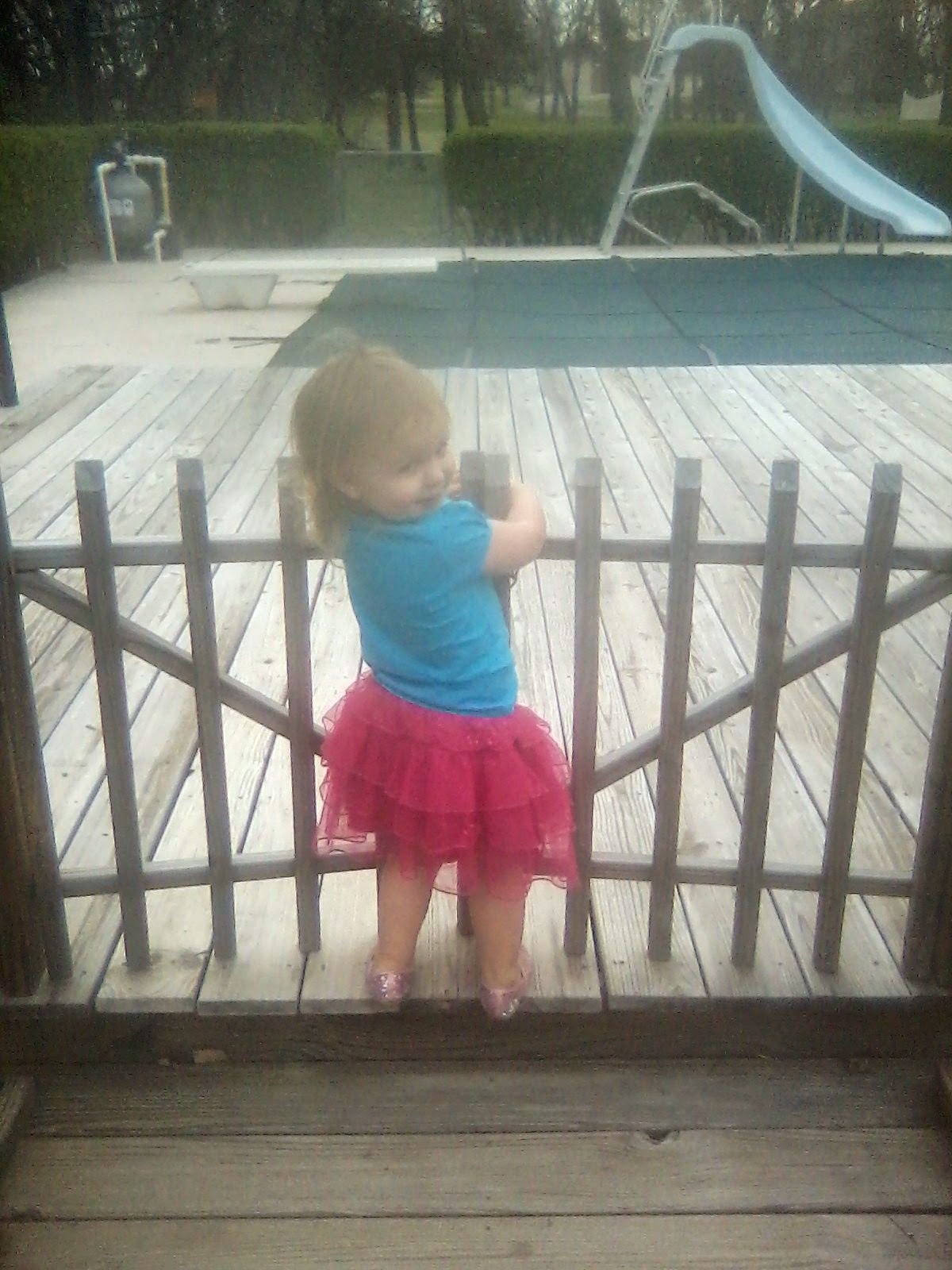 I managed to talk her out of opening this gate.  She graciously stopped, but she knew exactly how.  If you want to know something, ask a 2 year old.  They know everything, I swear.

Not only did Rosie know how to work her own phone, but she knew how to work mine.  Mine happens to have pictures from the day she was born until now, and she was really thrilled with that.  She would pull up the first time Abigail ever held her, and stare in wonder that she used to be so small.  I, too, stared in wonder at exactly the same thing.  She called my father at least 3 times in 2 days, until he gave up trying to talk to her, adding entertainment to his day.
Rosie loves her babies even more than being the Queen of the Trampoline. 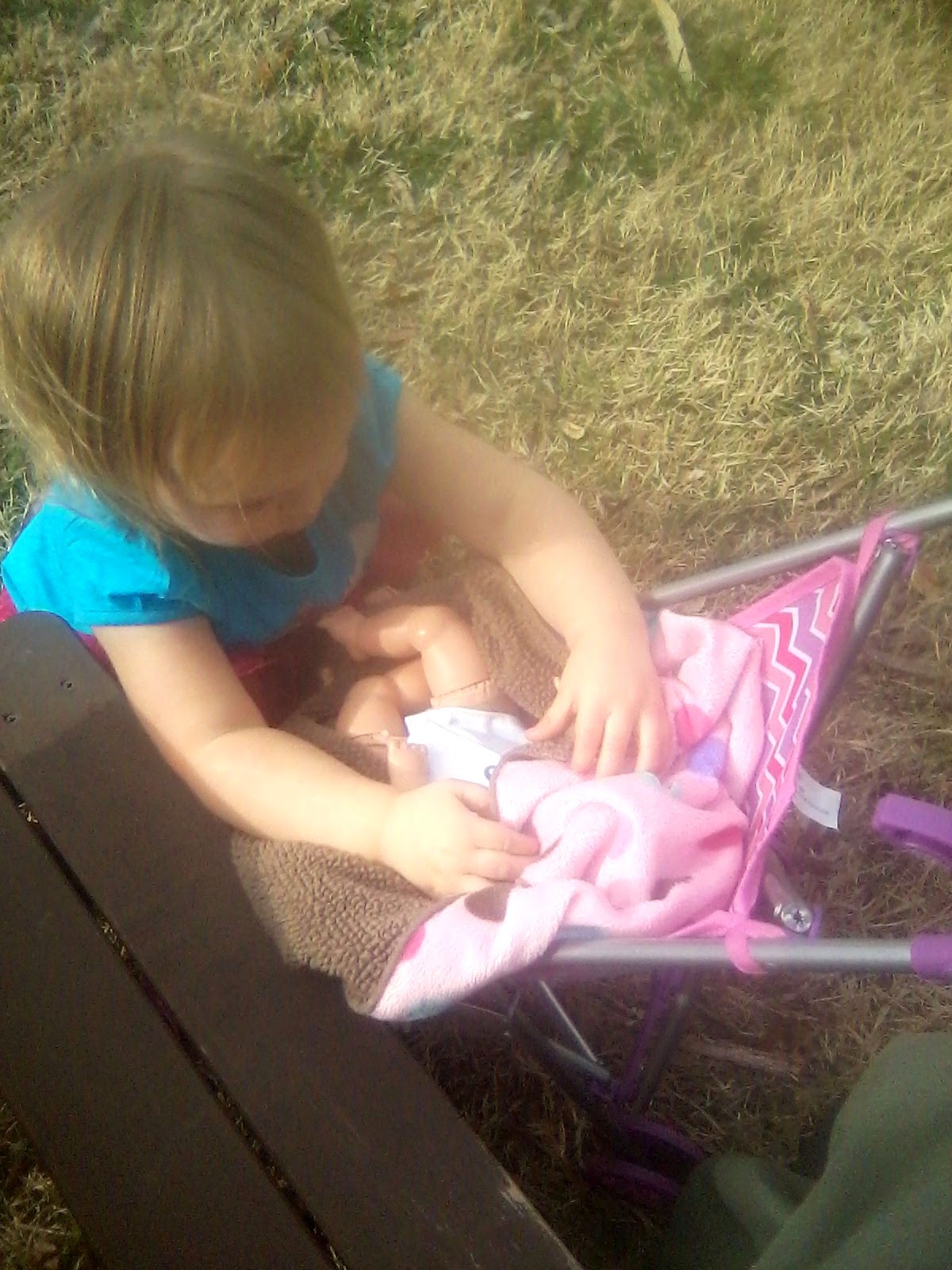 She is getting ready to be a big sister, as well as a little sister.  I told her I thought it would be so much fun to get to be both.  On these days, she was concentrating on her "boy baby".  You can tell he's a boy because of the Royals shirt he wears.  He came with us on all our travels, complete with a stroller, blanket, and a diaper bag, all remembered and gotten by Rosie herself.  She knows how to wrap him up in his blanket, make sure the sun doesn't get in his eyes, and strap him in so he doesn't fall out. 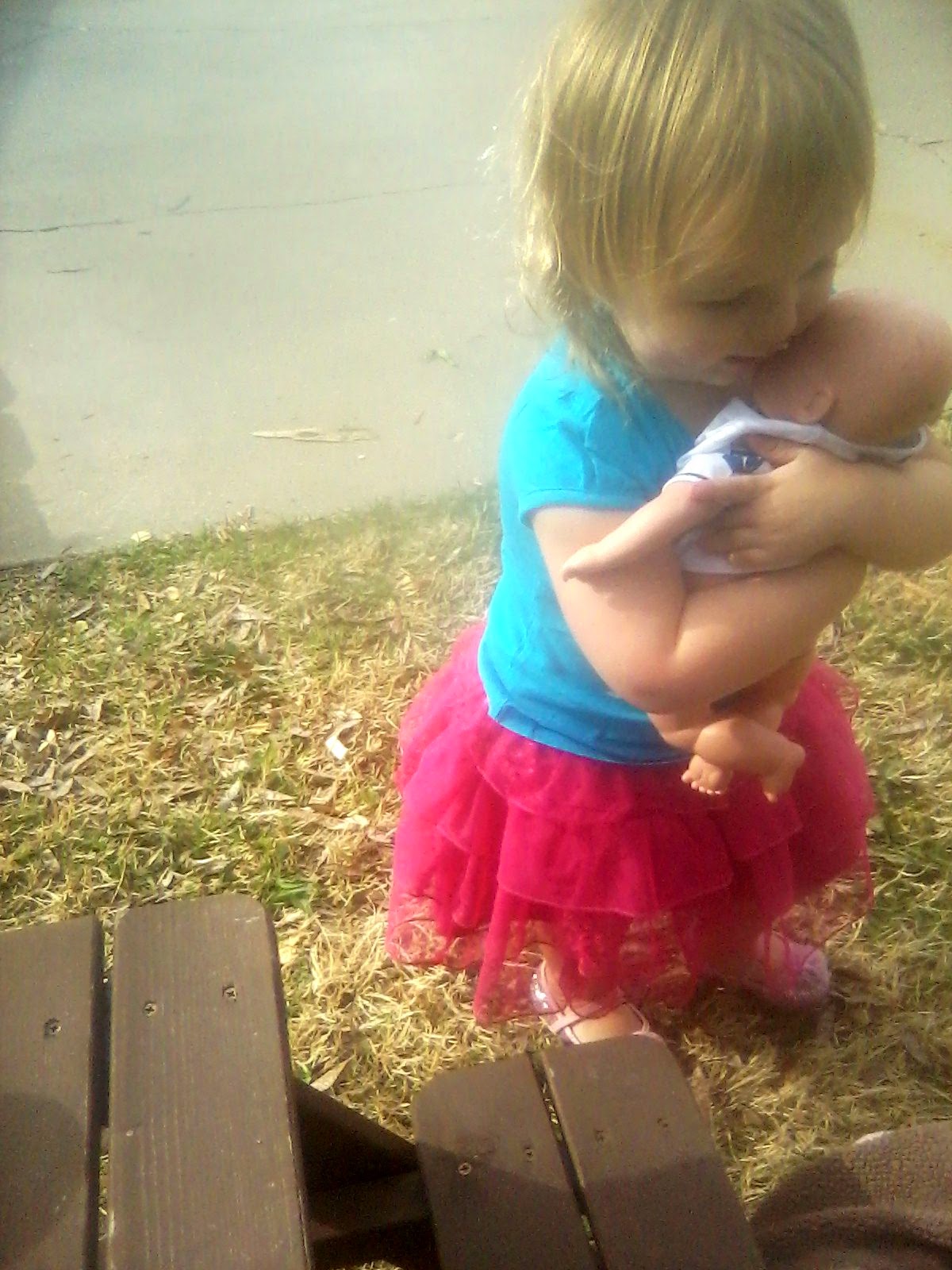 I sang her a few bars of her song but she just said "I not a store-bought woman!!" and then wanted to know what that was.  She was very touched that someone had written a song about her.  I told her that the best part was "cracklin Rosie make me smile", and we looked it up and danced to it thanks to youtube.  Youtube is one of the best parts of the modern world in my opinion. 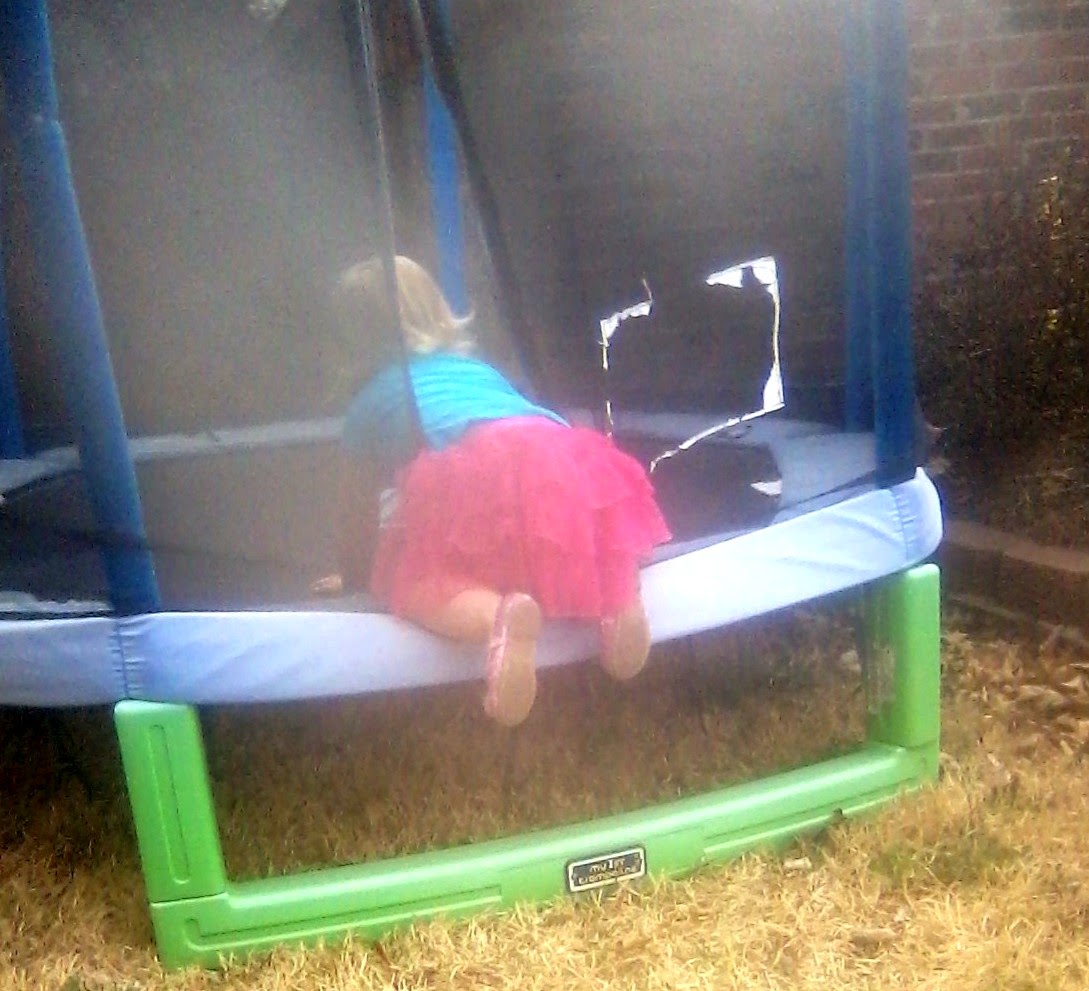 Frequent dismounts were called for if he would "cry", and she would pick him up, rock him side to side to while making the "shh-shh shh-shhh" noise instinctively known by all mothers of all babies everywhere.  She would strap him back into his stroller while saying "It's okay......I gah choo....." 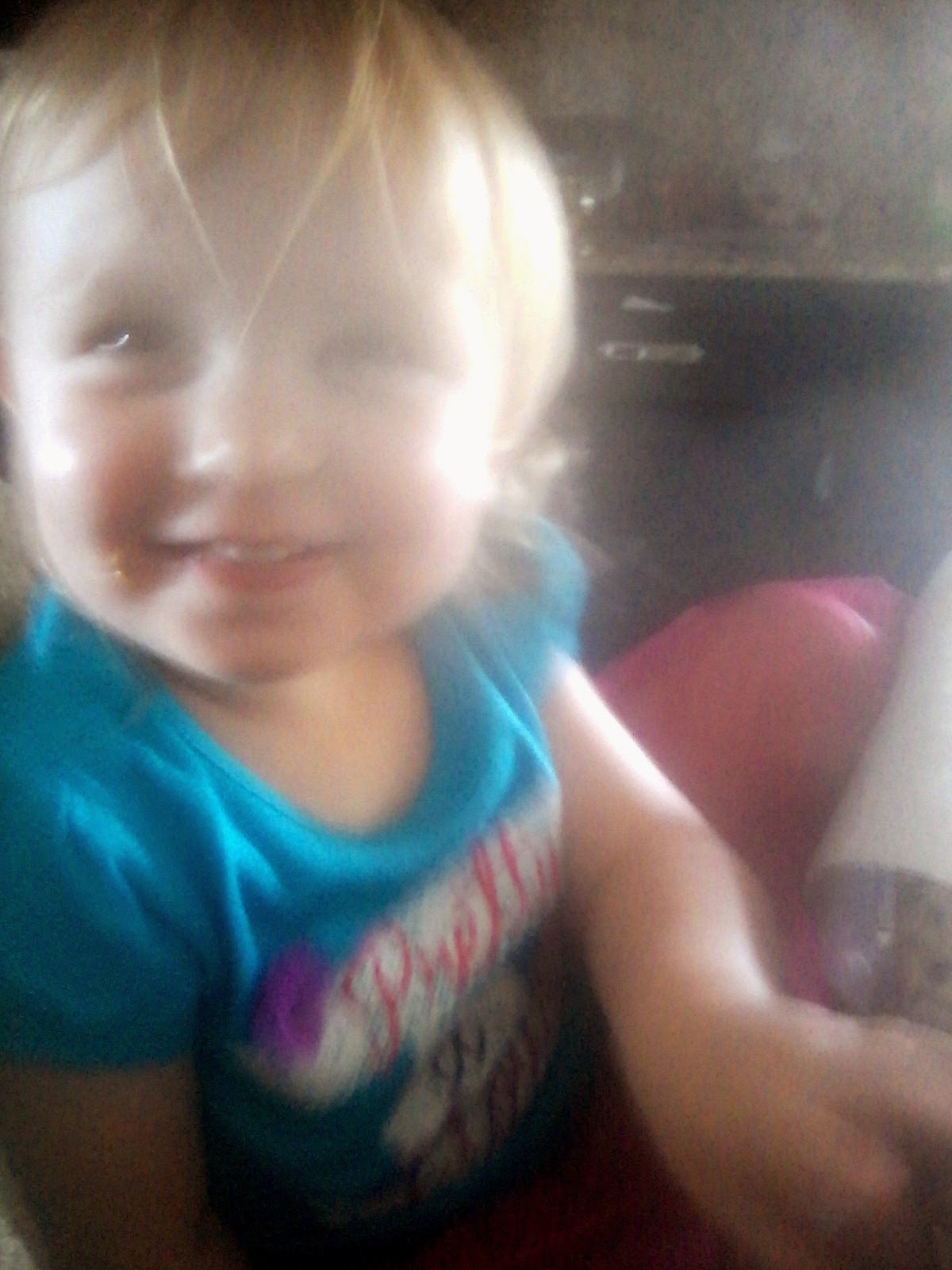 On my last day there, we celebrated by eating outside, which was Rosie's dream that day.  Also her dream, to drink coffee.  This turned out not to be about the "coffee" as much as the "cup".  Rosie's parents do not have an coffee, but they do have an impressive collection of tea bags, most of which did not have caffeine.  I drank all the ones with caffeine myself, and made Rosie some "coffee" in a cool cup which consisted of some Chamomile tea and milk.  She was thrilled.  We had "sammich"es of waffles folded over peanut butter and jelly for snack, and every time she would take a bite, she would turn to me and say "I drink my coffee!!" with the biggest laugh.  It was so much fun to do so little and make such a sweet child so very happy.

When her mother got home, Rosie got to tell her all about our adventures that day and I got to spend some time with my beloved Abigail.  Abigail wanted me to sing a pirate song.  I confess, I was never that into pirates, so I sang "16 bottles of rum on a dead man's chest", and she looked me dead in the eyes for a few seconds and then looked at me like I was nuts, and said "That doesn't even ryhme".....for all the world like I was some kind of idiot.  Which was very true, I had to admit.  That's the way I remember it, anyway.  Maybe we should have looked it up on youtube!

Then, in what was possibly the funniest moment of all, she grabbed both sides of my face and put her face right in mine and said "Mimi! Do you remember the red lipstick??" How could I forget the red lipstick???  My lips were chapped for days.  Apparently, after Abigail gave us those "makeovers" that day, the red lipstick mysteriously disappeared.  I looked at her mother as I said that yes, I did remember the red lipstick and Abigail explained that she had lost it somehow, on that very day.  Her mother silently smiled a small smile as she met my eyes, and I was reminded again how lucky I was to have this wonderful, determined and sometimes sneaky woman in my life.  Sometimes that red lipstick simply must go.  We moms gotta stick together.