My Oldest Baby, ahead of his 16 years, recently had his wisdom teeth start coming in.

So we journeyed to Kansas City to have them extracted.  He chose not to be put completely out, very unlike his mother. I admired his chutzpa, but my own memories of my own being extracted left dread in my heart.  My wisdom teeth came in when I was about 20 and I opted for the cheapest removal I could find.  I found a willing soul who gave me laughing gas, which made me cry, although I did not feel sad, copiously. My ears kept filling up while the poor dentist alternately used a hammer and chisel to break the teeth into pieces and then stood on the chair, pulling until his poor arms shook, attempting to pull them out.  While this was going on the only discomfort I felt was the sounds this made inside my head, which were incredibly horrible.  The body does not take trespassing slightly, under any circumstances.  Take my word for this. Please.  I spent about a week with a face so swollen I only had a little 0 to sip water or Spaghettios out of and bruising that was almost as bad as the swelling.  But I survived and then, happy day, I found a dentist that I trusted and never looked back.  Sadly, he does not remove wisdom teeth, so I took his referral and hoped for the best.

Looking at my young son laying back in the chair and refusing to be knocked out, all I could focus on was his shoes.  He is a size 13, and his feet looked so huge that it occurred to me that my baby was as big as a man.  This thought has been pestering me like mosquito's lately and my head knows it but my heart keeps fighting it and throwing crying fits about it.

The Dr. seemed to think it would be fine if he didn't get knocked completely out, so I just nodded, still focused on the shoes.

They invited me to leave the room for the second time and I managed to do it with some dignity.  Back in the waiting room I read my book and fought back tears (which had nothing to do with the book) and looked up and breathed slowly and finally went to the bathroom to cry just a little bit and relieve the pressure. I told myself I was being ridiculous and again my head knew this and accepted it but my heart, well, those two are often at odds and I have learned to deal with this somewhat successfully.  Somewhat.

It didn't take more than 1/2 an hour and when my baby came out, staggering slightly in his size 13 shoes and carrying a white envelope I assumed was a pain pill, he went straight to the car.  After I paid I went to check on him.  He was doing fine, but it was his teeth (arg) in the envelope and he couldn't swallow any of the ibuprofen I had with me because he was still numb.  Fortune was with us and he kept from swallowing one of the glumps of gauze that was still in his mouth, but getting it out he leaned forward, causing what seemed to be an alarming amount of blood to just run out of his poor, violated mouth and spill all down his front.  In this, he was also just like his mother.  His mother was now preoccupied with visions of Jack and Shadow stalking the teeth in the envelope, and trying to decide where she could "keep" these trophies without ever having to "see" them again.  Just so you take me seriously, here is what they look like. 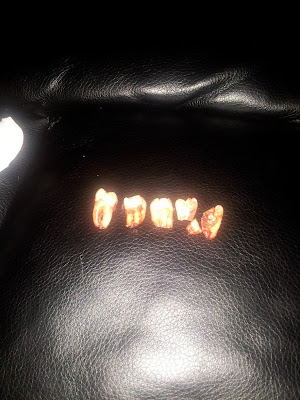 EWWWWW!!  These make me cringe.  I have a "thing" about teeth.  NOT a good "thing"......To see this makes me weak but blood pouring out of my child's mouth while I'm driving?  I take that right in stride.  That's just the way I am.

His mother drove immediately to a pharmacy handily located just across the road, went in with a look of panic on her face, and was immediately helped by a woman, also a mother whose daughter had just gone through this.  We gathered baggies, gauze and a bag of ice together, and it turned out she was actually from a town only 30 miles from my own.  I considered that a God wink.

Two hours later we were home and had all the prescriptions filled. We were stocked up on soft foods and every kind of ice cream concoction I could think of, which was quite a lot.

Saturday night the boys felt good enough to stay up late playing their "magic" game (which involves cards instead of video games and which I like very much) and then at 4 am things got really interesting.

I was woken up by My Oldest Baby and his best friend (my fourth son), who informed me that My Oldest Baby thought his heart had stopped in his sleep.  This was not what caused them to wake me.  First, my fourth son had googled all the side effects of the medication and that had scared them enough to wake me.  Now, this is a syndrome that I know all about, thanks to The Beautiful Redhead. Indeed, her entire generation will probably have a syndrome named for them that involves googling side effects and convincing yourself that you are dying.  The way I figure it, it may keep the emergency rooms in business.

So, to make a long story short, My Oldest Baby once again proved that he is my son, and declared he would take no more pain medication, just ibuprofen from here on in, because it just wasn't worth it.  It sounded good to me.  By 6 am we were all back in bed, after having a little snack of Spaghettios. What fun is it to be up in the middle of the night with no snack, after all?

So far, so good today with just ibuprofen.  People always think we have a big tolerance for pain.  It's actually just the opposite: we are allergic to lots of random stuff and usually it's much simpler to put up with a little pain than going to the emergency room because of allergic reactions.  Simpler, cheaper, faster, and less trouble.

He is ready to go to his own bed tonight, free from narcotics and the hallucinations that sometimes come with them.  And his mother?  She has just about accepted that he really is almost a full grown man, able to make decisions and see them through with nothing but the courage of his convictions.

Her heart tells her that this one is going to leave big footprints, and not just because of the size 13 shoes.  Her heart always knows.
Posted by Momiss at 9/01/2013 04:42:00 PM No comments: Links to this post