When my mother died, The Rock Star was 14.

My mother had an old Jeep Cherokee that she had purposely kept for the Rock Star and then his sister to drive.  It was very thoughtful of her to even think of it, considering what she was going through at the time.  She had time to look ahead with her illness, but she was always one to look ahead.

So when the Rock Star turned 16 and got his license, he already had a reliable vehicle that cost very little to insure.  That Jeep Cherokee lasted through him and The Beautiful Redhead both.  It finally met it's maker after it hit a deer, and we were all very sad.

The last few years I've been looking ahead myself, wondering what in the world I would do for the boys to have something to drive.
How would I ever afford to buy them a vehicle in addition to shoes and jeans?  The shoes and jeans for 2 teenage boys are very expensive, in case you don't know.  Savings is hard to add to, when you are buying shoes and jeans every time you turn around.   It's always like "JEANS & SHOES! SHOES & JEANS! MORE JEANS!! NEED SHOES AGAIN!!" in my head for the last couple of years.

What would happen? I wondered this for years, putting back what little I could spare and hoping for a miracle.

As usual, the miracle came from my most wonderful of all step-mothers, the one I kept!   Her name is Paula, and she called me up a few weeks ago and said that she had "happened to run into a girl who had to sell her car that night, for $300", so of course she at least had to go look at it.

After she looked at it she brought her husband to look at it.  He drove it, looked it over,  and gave Paula the high sign to buy it right then and there.

It's a 1994 Dodge (Red) Caravan.  It had a few dents, needed a new bumper, had high mileage, but ran perfectly.  Paula's husband now (thank you again, God for her finding such a wonderful man) pulled out the dents, replaced the bumper, did body work, painted it, put some pin striping on it (silver), redid the carpet and headliner, and as if that wasn't miracle enough, changed all the fluids and replaced all the filters.

I don't know how to say how much this means to me.  For the past several weeks we have had excited, giddy conversations about how it's coming.  Titles and plates and proof of insurance have kept the mailmen busy as they flew from one end of Missouri to the other, and it will be ready when we get down there.  This is a big SURPRISE for the twins, who are convinced they will never be able to have a car at all.  Why would they think that?  Well, because their mother uses reality as a teacher every chance she gets, and has been taking them around to car lots and letting them get a load of how much cars and more importantly, trucks, actually cost.

Paula was going to tell them on the phone, so excited was she that she had not only found a vehicle, but could afford to buy it!!  Her exact words were "Well, I didn't want get it without saying anything, but I"ve never been able to do anything for them and they never ask for anything.  YOU never ask for anything, and I thought it was too good a deal to pass up."

I said "Oh, no, I'm not going to say a word.  This will be your present to them for their 16th birthday, and you will get to surprise them with it when we come down."

She just said "Ooooooohhhh." And I knew she was remembering my mother's Jeep and The Rock Star and Beautiful Redhead's first car. How wonderful is it to through years with the same people and know that there are things they do not have to be told.  To know that you don't have to explain anything because they were there.  They remember it too, and know all the angles, ins, outs, in short, everything.  That's one of the reasons why I think we quit making new friends at a certain point in life: because we just don't want to put the energy into trying to explain all that stuff.  It's exhausting to even think about past the age of about 35, and some of that stuff cannot BE explained in any way that would make sense unless you were there. You know what I mean?  I truly do not know who I would be without this angel, who came to me as a step-mother but stayed on as one of the dearest, best friends I have ever had.  She isn't really old enough to be my mother and we have always had the best relationship.  She is, simply put, worth everything any of us ever went through to get to her.  I never count the costs when it comes to Paula. She is worth it all.  Everything else just fades into the background, compared to her. If I had to live my life without my mother it was a great comfort, to both of us, to know that I would still have Paula.  And that my children would still have Paula.  She has saved us more times than she even knows,  just by being there for us.

Ever since then we have both been so excited we have been floating around like, I don't know, the job rate is down to 3% and America is no longer dependent on foreign oil because we finally just used our own or something!  I mean, we are EXCITED!!!   VERY EXCITED!!!

Our only 2nd thoughts were vocalized by Paula.  "You don't think they will be disappointed that it's a van, do you?" I was quiet.  This thought had occurred to me about the same time as she asked it. I've been embarrassed by my kids turning up their noses at presents before, but not since they were very small.  I would die of mortification if this happened, with Paula, with this miracle.   I thought about it.  I thought about 2 boys who only have learned the hard way that they only have their mother to depend on, who know the value of a dollar, who have to be wondering if they will EVER get a car.  And I said "I don't think so.  I don't think so at all.  I think they will be thrilled to death to have anything at all and with all you guys have done to it, it's a lot better than 'anything at all'".  I admit, also in the back of my mind, I was thinking that if they didn't like it I would take it and they could drive my car.  At this point I was so excited that I would have been very happy to have a van again.

Just a few more days to go and we will surprise the twins with a great first car that their mother can afford insurance on!  It's like a miracle, you guys!!! 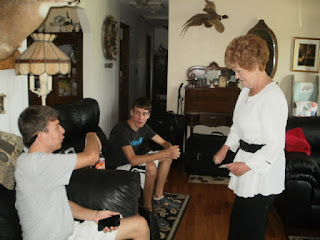 "I have an early birthday present for you guys.  The only thing is you have to share it." 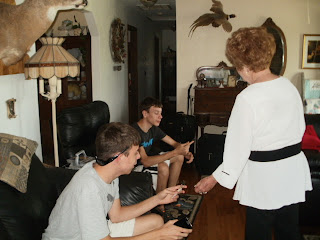 She handed them each a key with their name on it. 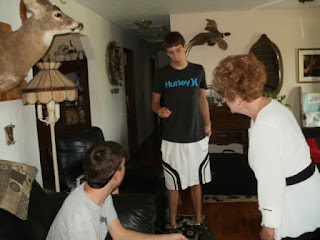 ﻿
The light is beginning to dawn on them. 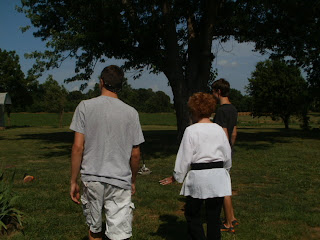 They had to take the keys and figure out which car the key worked on. 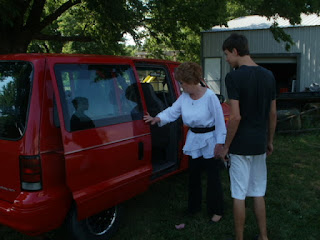 Aaron just had the goofiest smile on his face and he kept saying "This is really nice, I'm not gonna lie."  Andy kept saying "We're gonna be hauling everybody!" 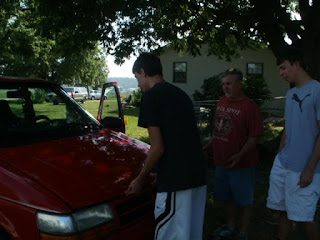 ﻿
The best news is, it's old enough that they can actually see the motor, ergo they can also learn how to FIX the motor! 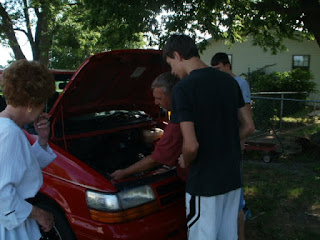 Paula, being an angel herself, found and married another angel who also happens to know everything there is to know about cars and motors. 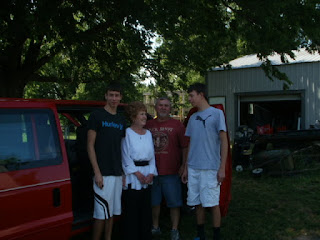