Forks in the Road and Having Faith....

With all the talk about abortion lately, I would like to ask a few questions.  Not politically correct questions, and not questions for people who are not Christians, probably.

When I was pregnant with the twins, I had the distinct and ominous feeling throughout the pregnancy that something was going to go wrong.  I often have these "feelings" where I just "know" things.  Don't get excited, the things I "know" are not winning lottery numbers or anything like that.  I took special care throughout, thinking that I could avoid whatever it was that was going to go wrong.

At some point in the pregnancy the Dr. who did the ultra sound told me that we "had" to do the test to see if either one of the babies was Down's Syndrome.  This was not because I was concerned about that.  I believed that whatever baby I was going to have was the exact right one that God had designed for me, and me alone, to have.  I still do believe that.  No, the Dr. explained, it was because he "had" to give me the choice of "terminating" the pregnancy.  There was a box he "had" to check off of a list in order not to come under suspicion by the medical powers that be, or else he might lose his license.

At 36 1/2 weeks we had scheduled an amniocentesis test to see if the twins' lungs were developed enough to schedule a C-section.  You may already know that I feel women have given up their power over their bodies and the birth process to people who have schedules they want to keep and boxes to check off lists for government agencies.  So let me just reiterate that I strongly advise people to just let their babies come when God decrees it time.  The trouble was that I had gained over 100 pounds and could not easily breathe any longer, as one or the other of the twins was constantly pushing up on the bottom of my lungs.  This is a picture of me the morning before we went for the test. 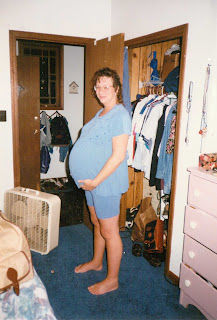 Nuff said.  lol
The amnio caused a placental abrupt ion, which is where the wall of the uterus tears away from the abdominal wall, causing both myself and the twins to bleed out.  We were all dying while I calmly reclined in a hospital bed and read a magazine.

Through an emergency surgery, we all survived.  The twins weighed 7 lbs 3 oz and 6 lb. 4 oz., but were both born dead with half of their blood volume and collapsed veins.  It took 3 minutes for my Oldest baby and 15 minutes for my Youngest Baby to be brought back to life, due to no one being able to get a vein so that they could be given blood.  They spent 3 weeks in the NICU after that, during which time we were plunged into despair and more importantly, a test of our faith.

See, God does not ask us to trust him when it's convenient, or when the outcome is guaranteed.  He asks us to trust him.  Blind faith is hard to achieve, but not impossible.  I will never forget coming out of the anesthesia and realizing what a predicament we were all in.  The first thing I did was start to pray, and then I stopped.  I was at a brick wall, trying to decide to pray for God to save them or if that would be the best thing, not knowing what kind of lives I might be committing us all to.  Suffice it to say that my lesson, learned the hard way, as always, was to pray Thy Will Be Done and ask for the strength and grace to get through it in a way that God could be proud of.

Everything turned out all right.  Everyone lived, and I thank God for it every day, no matter how bad that day has been.

This is just a little background to ask the question that we all, at some time or another, have to ask ourselves:  Do I believe that God is really in control?  And if so, do I have enough faith to follow His will?

I have been appalled at how politicians desert their beliefs in order to shill for votes.  The discussion lately has been whether abortion should be allowed (by government agencies) in cases of rape (and whether it's "legitimate") or incest.

Do you remember the No Means No campaign that was launched in the 80's?  It was supposed to educate young men to understand that if a girl said no, even if she had spent the evening with them, gotten drunk and voluntarily come to their house or let them into her own, that they should stop everything right there.  I am not making the argument that they should go ahead a rape the girl.  I am pointing out that the girl would find herself in this situation through her own free will and actions, and that to expect any man to stop at that point is extremely unrealistic.

But let us say that the situation is not that.  Let us say that the girl was attacked getting out of her car in the parking lot of her own building and raped and finds herself pregnant.  This is terrible, no question.  It is a fork in the road for that poor woman.  The most important question that I can imagine asking in that situation is this:  Do you believe that God would allow a child to be conceived if it was not His plan?  I admit, it's a tough question, but life is full of them.

In my experience, becoming a mother is the best and most important thing that ever happens to anyone, regardless of the circumstances.  It changes you, and through you it changes everything in your world.  Do you have the faith to trust God and follow His will, or not?

Becoming a parent is painful, messy, inconvenient and endless.  Most of us would not trade it for anything in the world, regardless.

If you find yourself at this particular fork in the road, choose carefully.  There will be lots of people, especially women, urging you not to feel bad and telling you all about your "rights to your body".  They will assure you that it will be confidential.  "No one will know".  They forget about God.  God knows, and you will know, and whatever decision you make, you will have to live with the rest of your life.  Will God forgive you?  I believe He will.  Will you be able to forgive yourself?  Only you can answer that.

I would urge you to have that baby.  Whether you give it up for adoption or make sacrifices the rest of your life to raise it, I believe you will never regret it.  But you will have to make your own decision.  Choose wisely, because when you die, it is not a government agency that you will answer to.  I think you will answer to God, and I also believe that you will get to meet the soul you denied life, because that soul will have been in heaven waiting to meet you.  You will have already been forgiven.

I know these are hard questions, but as I said before: life is full of them.  Choose wisely and try to have a little faith.  God does not bring you to anything that He will not also see you through.  Don't worry about the details.

No matter how bad things are, God is in control.