Here is the last picture of how the kitchen used to look......in the past.
We may have still had a chance to turn back at this point, but we are beyond that option now.
I spent all weekend packing it up, getting rid of stuff, and making piles of stuff to keep, in order of importance.
In a fit of ruthless sorting, I just threw the kitchen curtains away!
I should have done it years ago but just hadn't gotten around to it.
Check that off the list.
And now all the stuff I sorted in order of importance has been carried to the basement and put haphazardly who-knows-where.  So I guess I will get a chance to second guess my values at some point in the future.
I am already thinking of that time as the "digging out" phase. 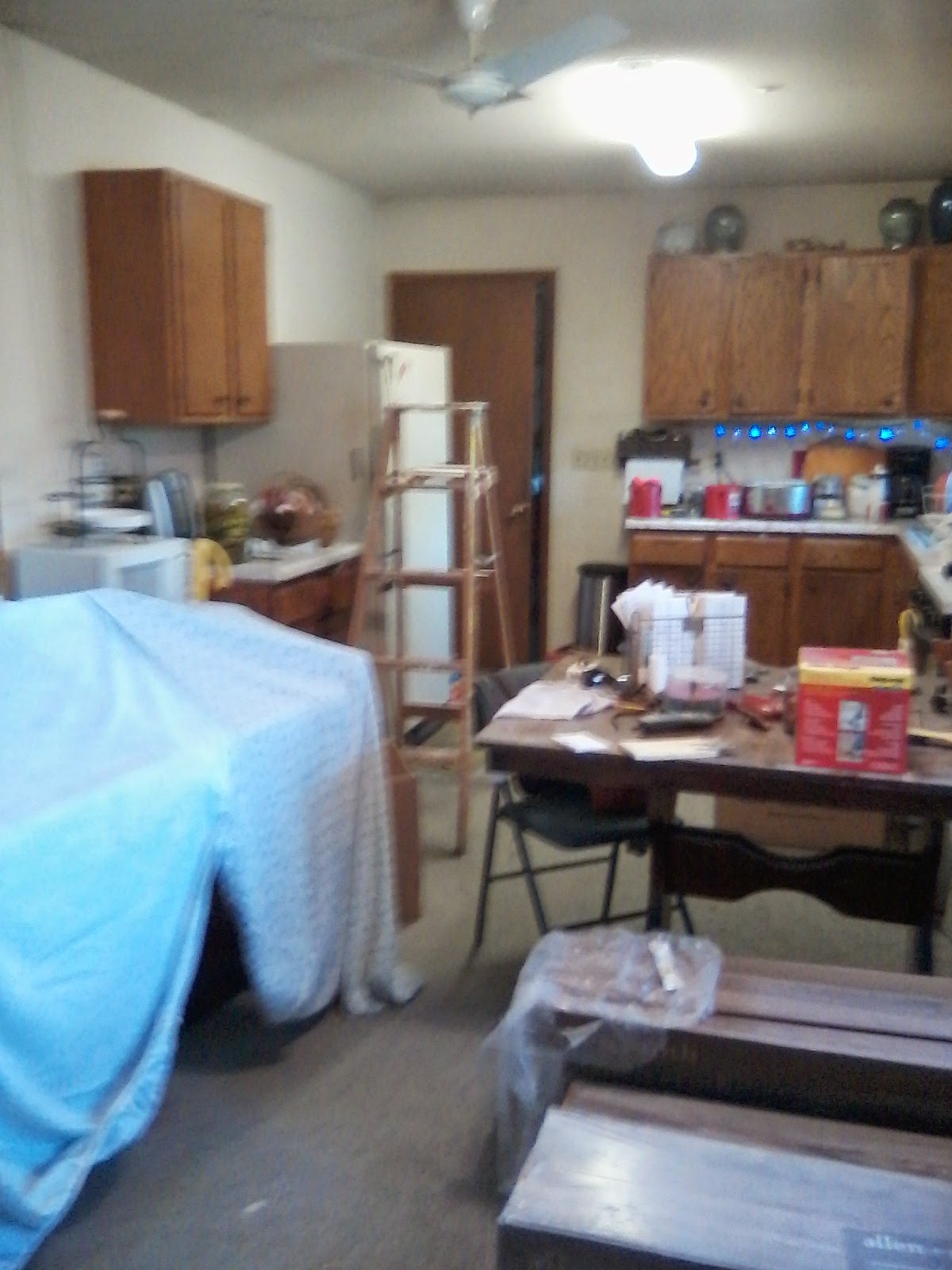 How the kitchen used to look.  Goodbye forever kitchen.  It's been......real.

Last night, frustrated with the lack of enthusiasm that immediate, visual results always give us, we decided to mix it up a bit.
The cabinets are all plastic-ed off, taking away our access to regular forks, plates, glasses, etc.
The kitchen was pretty empty and bare.
So what did we decide to do?
Well......... 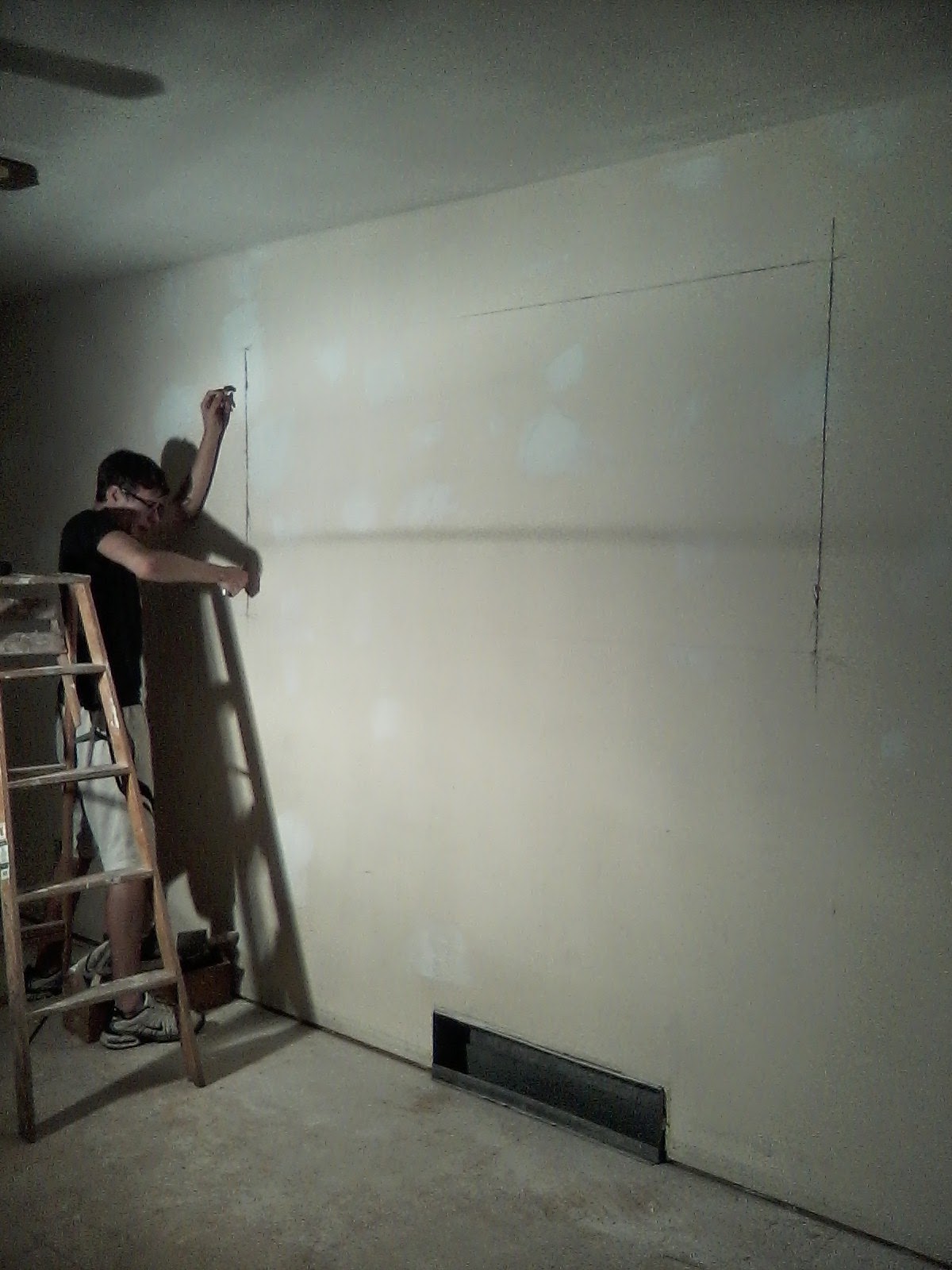 Running a chalk line where we want to cut.

We decided to get rid of about half the wall separating the kitchen and living room--that's what!
This was not a fast process, as we were learning as we went.
But next time it will be much faster. 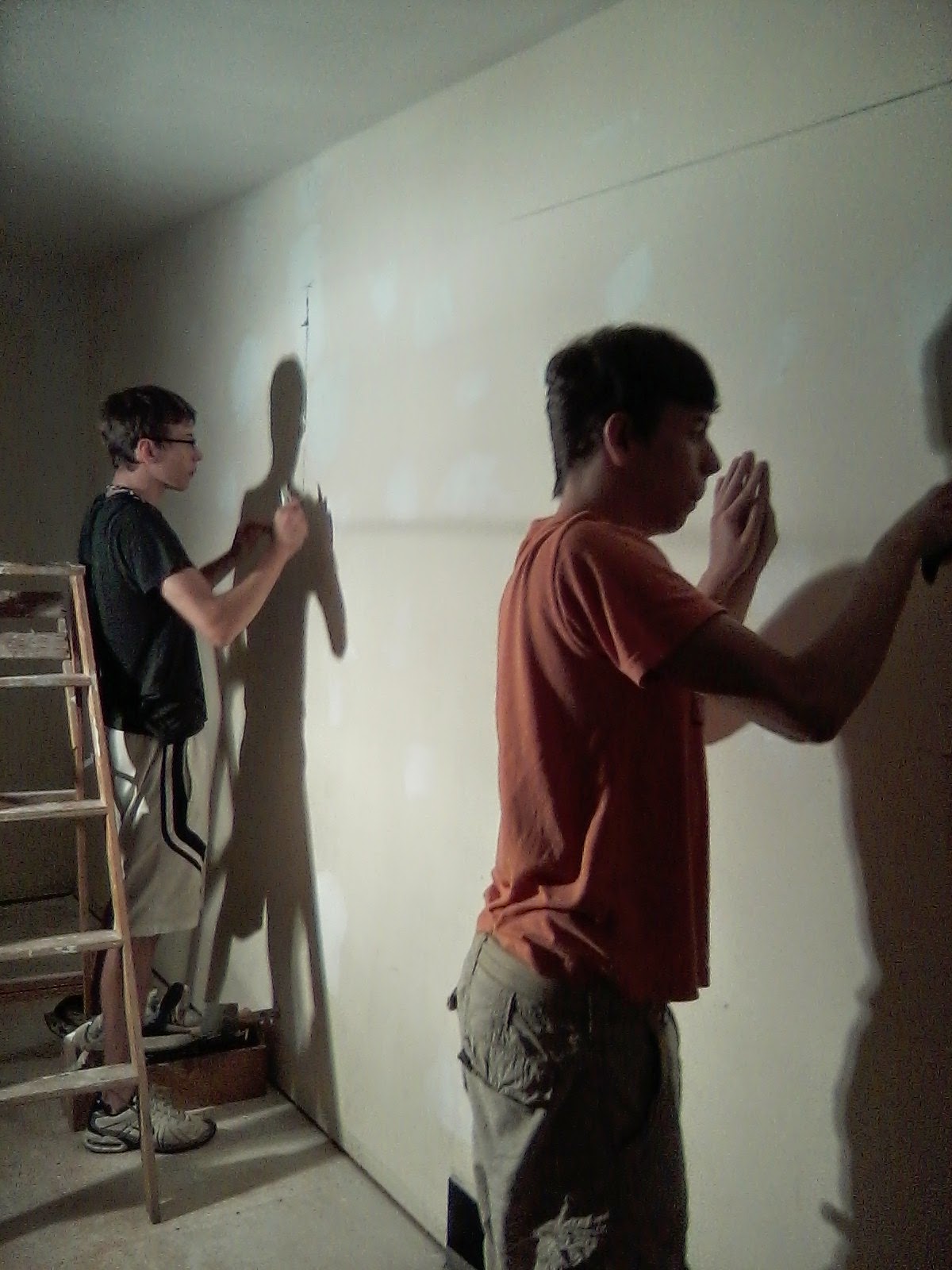 The Grand Finale wondered if we should be doing this, probably because they have learned to recognize anything classified as more work right off the bat.
What did we have to lose but gaming time and sleep, respectively?
We forged ahead, as we are wont to do.
A luck would have it, is a load-bearing wall. 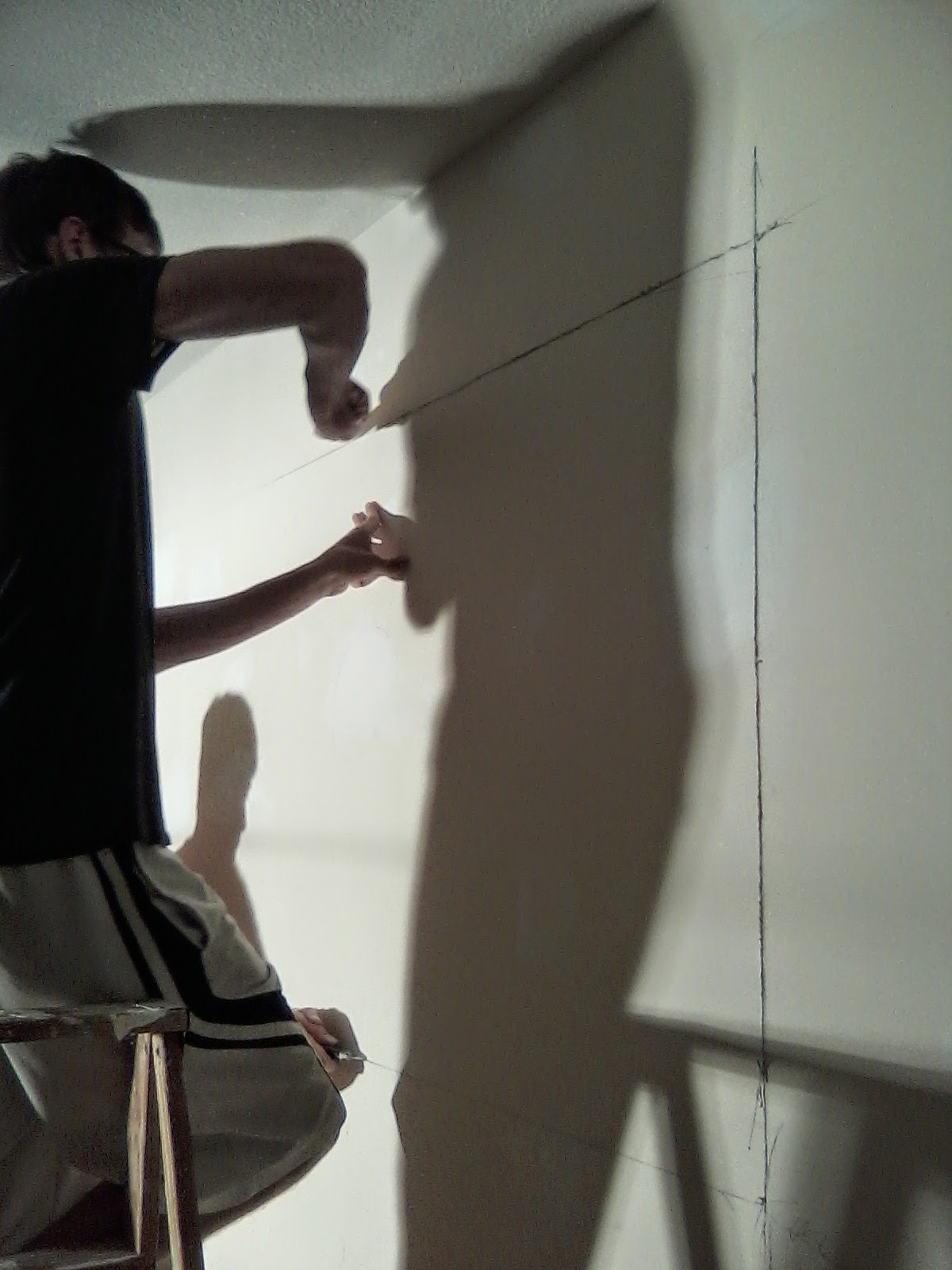 Me and my shaaaaaaaaa-dow, going blindly forward, come what may.

This means we have to leave the studs OR put in a header across the top to support the weight.
The weight of the house.  Yikes.
I opted to just leave the studs in.
Why?  Because I'm tired, mostly, because I don't want to cause problems with the roof, but also because there was no where to go but up.  Remember?
Even with the studs still there, it will be better than it was before..  No point in going straight to the top.  Up is enough for me.  I like that about me. 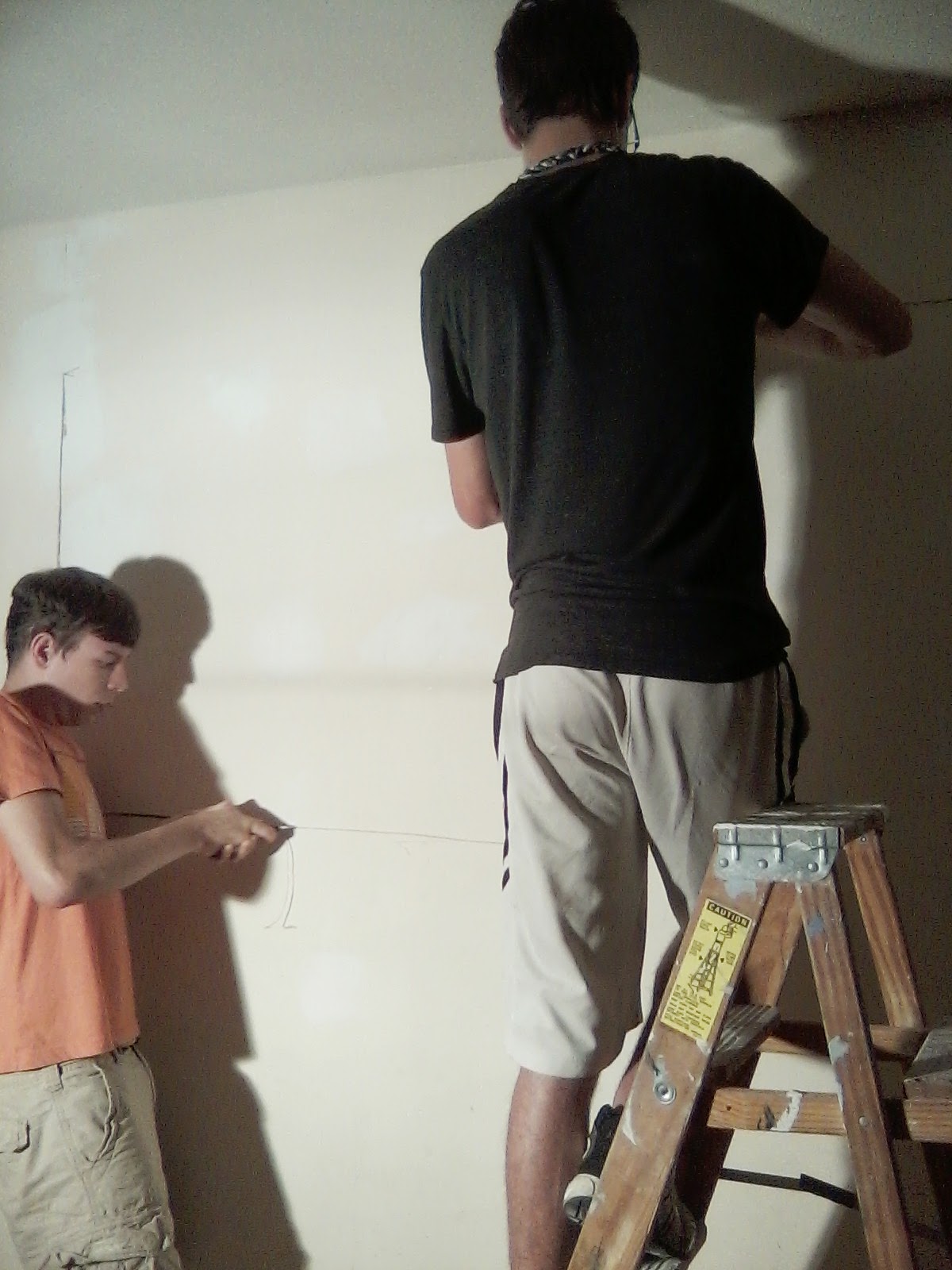 Not fast--but the results are electrifying. *Not literally*

"I will sand them down and paint them", I said.
"We can put shelves in, hang crystals from the top. ...or something," said I.
The Angel made the argument that to do it "right", we should put in a header and take out the studs.
By now it was getting late and I pointed out all the extra time, expense and general pain and agony this would include.
We agreed the studs could be fine, what with all the extra air and light, and we can always do more later.
*Like that will ever happen*
(Friends just know this stuff.  It does not have to be spoken aloud.)

Since it is obvious by looking at our walls that there are people who like to punch holes in sheet rock, The Angel designated a time for us to get this our of our systems.
I'm not naming any names, but I am certainly hoping we got this out of our systems. 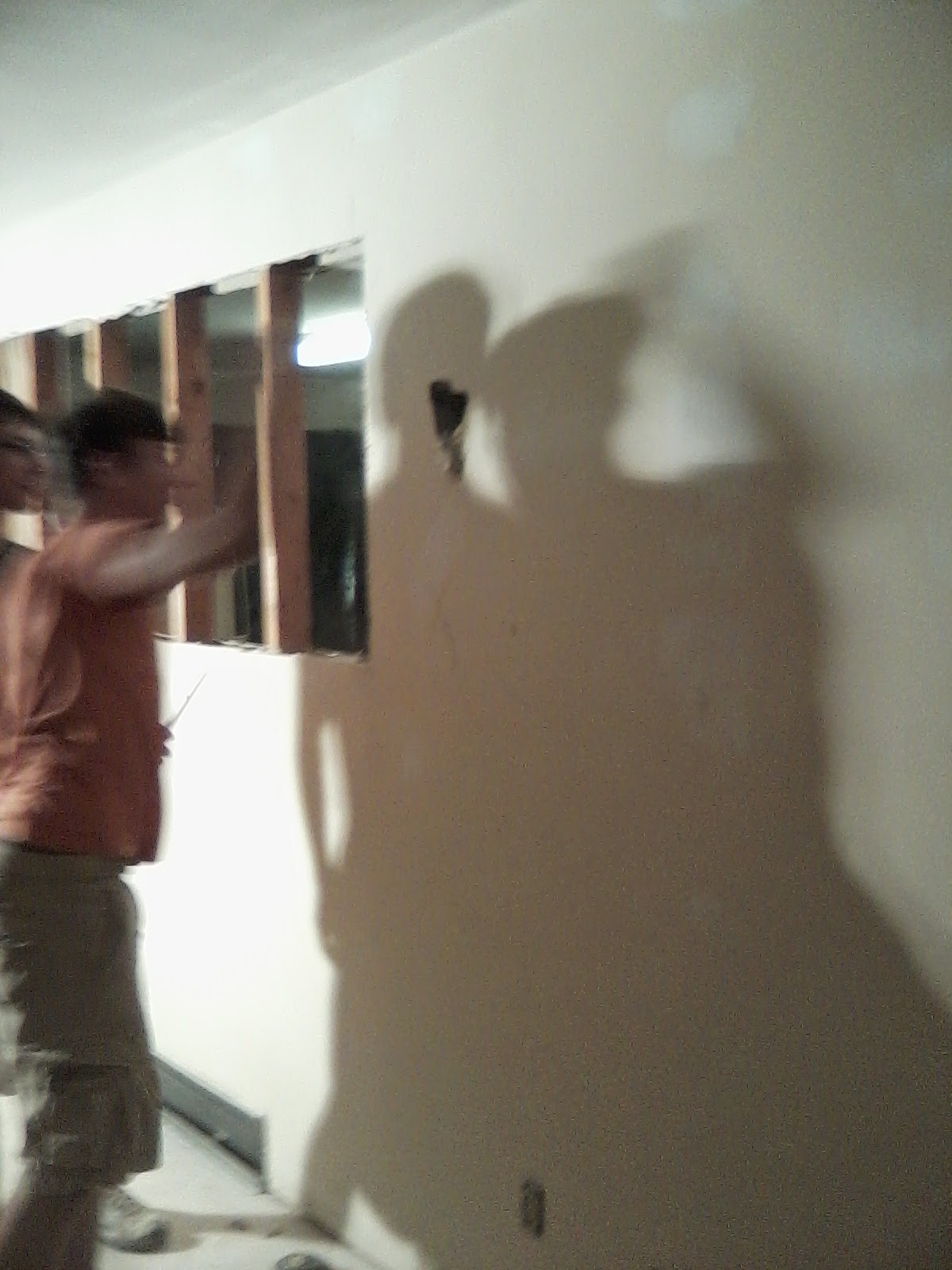 Put yer money where your mouth is, boy.

Oddly, they were hesitant to punch through, on purpose, so to speak. 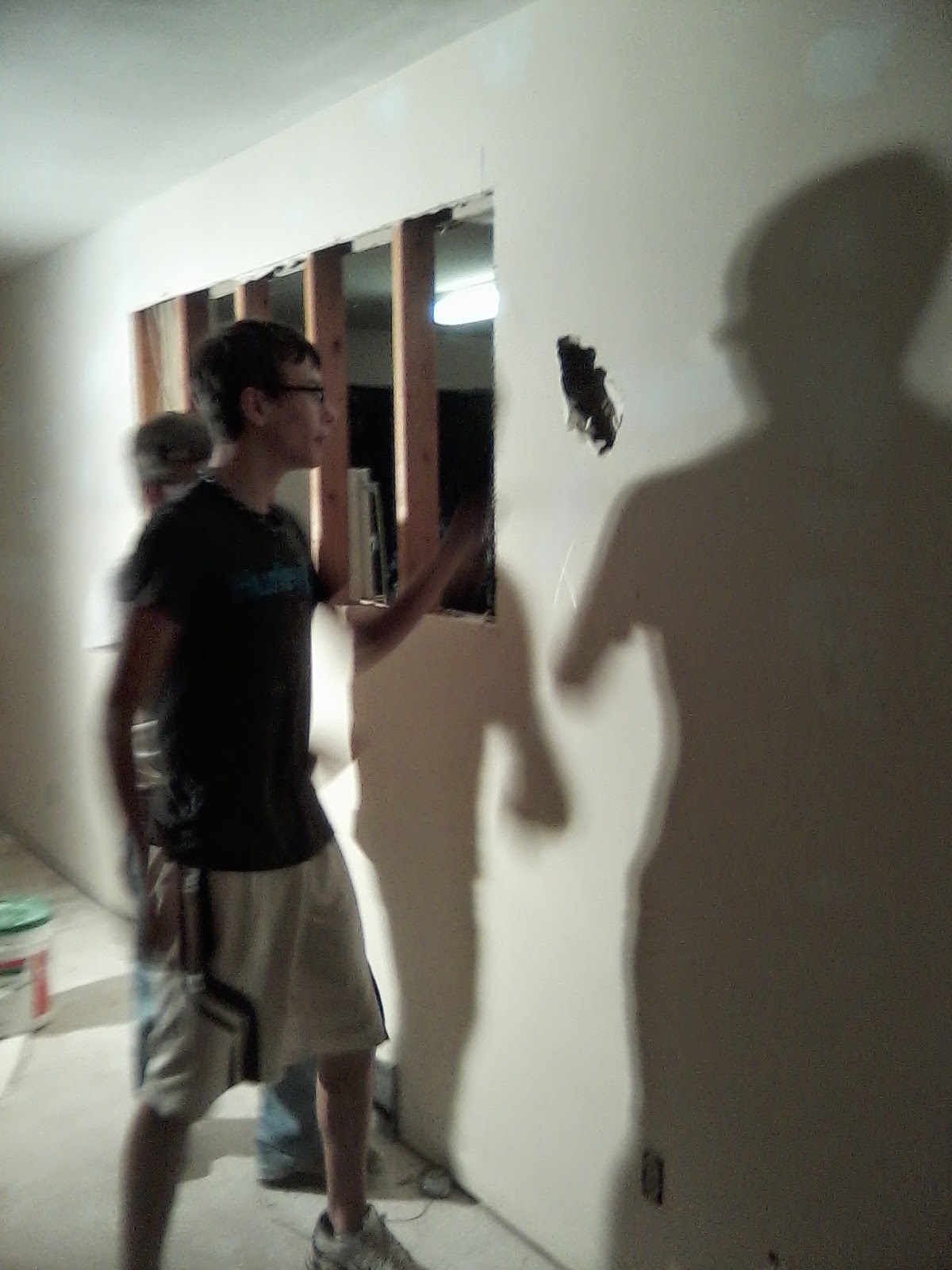 They soon got into the spirit, though.  One of the most important things they have learned with The Angel, and all boys need someone in their lives to teach them this, and I believe it needs to be a man, is not to be afraid to get in there and do something.  Especially when you have the self confidence to know that even if you mess things up, and you will, that's okay.  You can also fix it.
You will make mistakes, but that's okay, you can fix them.
This is a lesson that really cannot be learned to early, in my opinion.
Not to mention, if you are aware of the time and effort it will take to "fix" whatever it is, it *may* deter you from making mistakes more than once.  It also *may* not, but that is up to you, isn't it?  As the Master of your own Destiny, it's all up to you.  Think it over and decide, then do what  you think is best, knowing that you will be held accountable for it and you will also be responsible for making it right.
This is life. 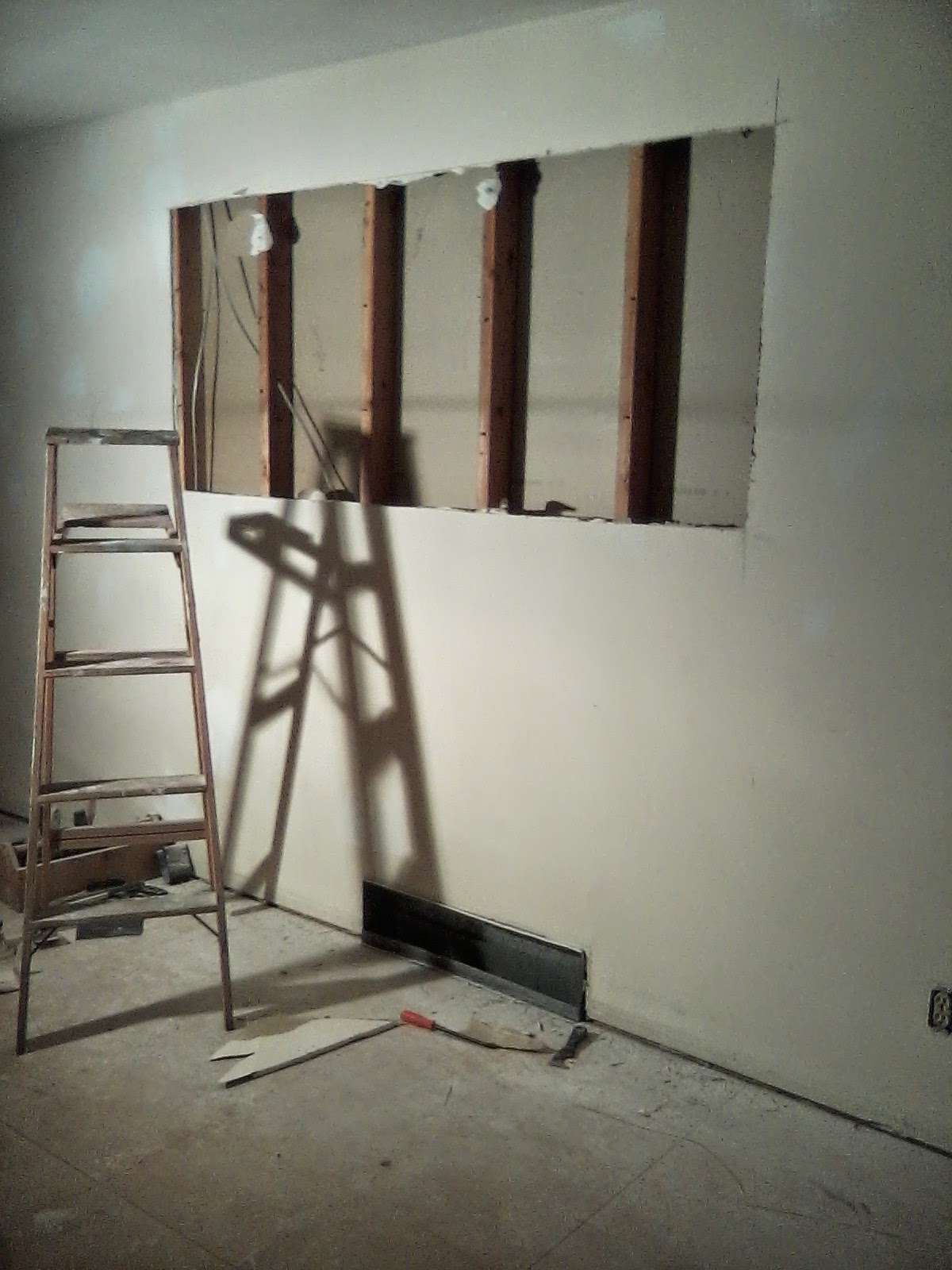 Once we knew where the wires were, we were ready to start on the other side.
This entailed getting my spice and "goodie" cabinet off the wall and moving a counter.
Which would have been fine except that I had already packed away all the extra Wal Mart bags and couldn't find them, so we had to cover what's left of the kitchen table with all my spices, baking supplies, cake mixes, chocolate in assorted forms, etc.
And I thought I'd thought of everything!
This is how my life goes all the time.
I just consider it a learning experience that never stops. 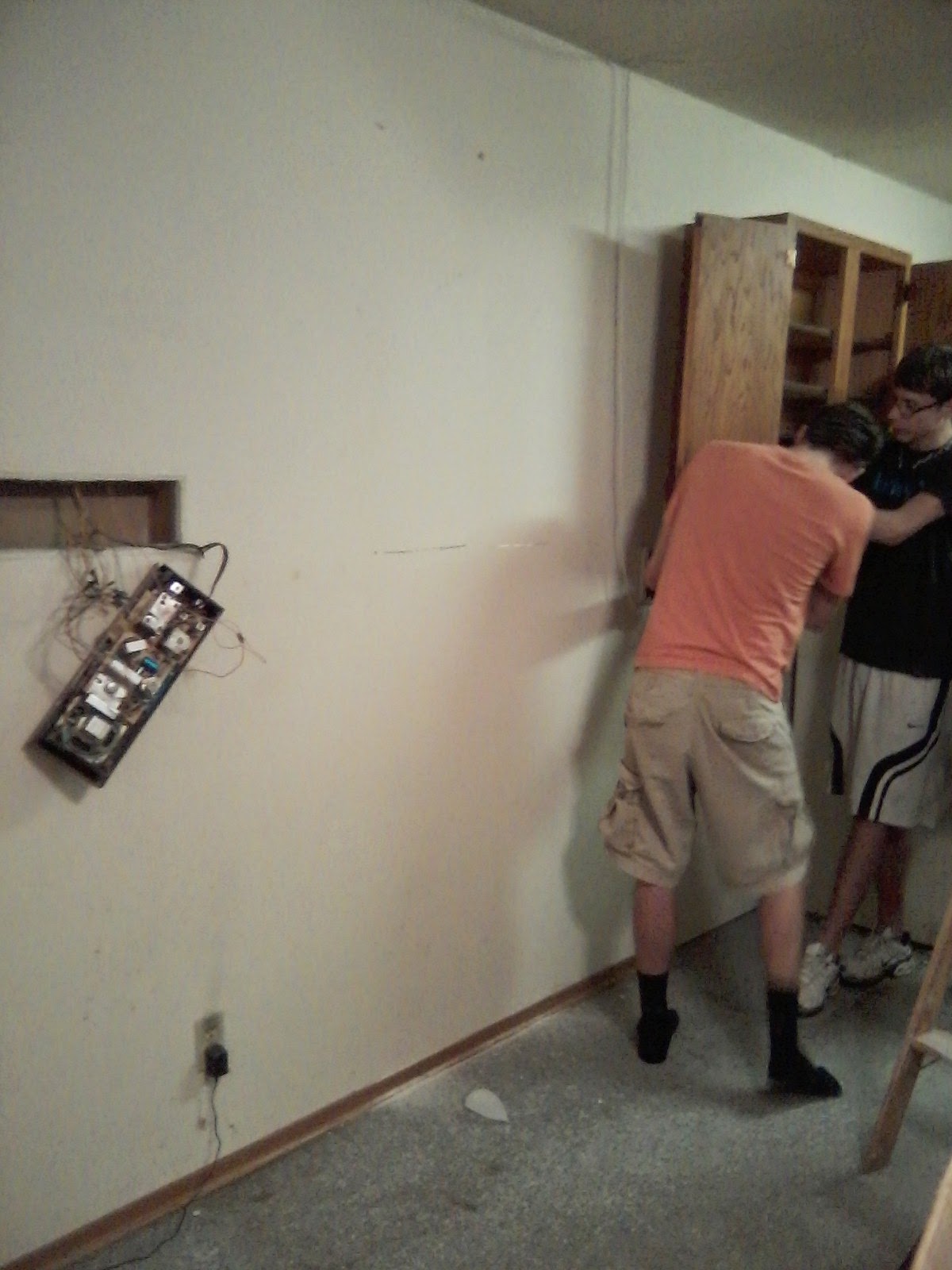 In for a penny, in for a pound--it's our motto.  I believe this often happens with the realization of the  birth of twins, but I could be wrong about that.  See the intercom system just hanging there?  I DID THAT.  IF you have never torn something out of your house I think you will enjoy it a lot.

I even had some fun walking around and pointing at stuff and saying things like "Okay, 1970's intercom system:  GONE."  "Cabinet-over there." *Pointing*
And it happened.
I did not look back or feel any regrets, but then that's not really ever been my thing either.  I've also gotten very good at it, but then I've had a lot of practice.
All I did was make a mental note to get some more bags for the Shop Vac, which I love dearly.  Did you know they are not any more expensive than vacuum cleaners?
Not to mention, much more versatile?  Fun fact.
Soon I could see light through the (straight, neat) cut in the sheet rock on the kitchen side. 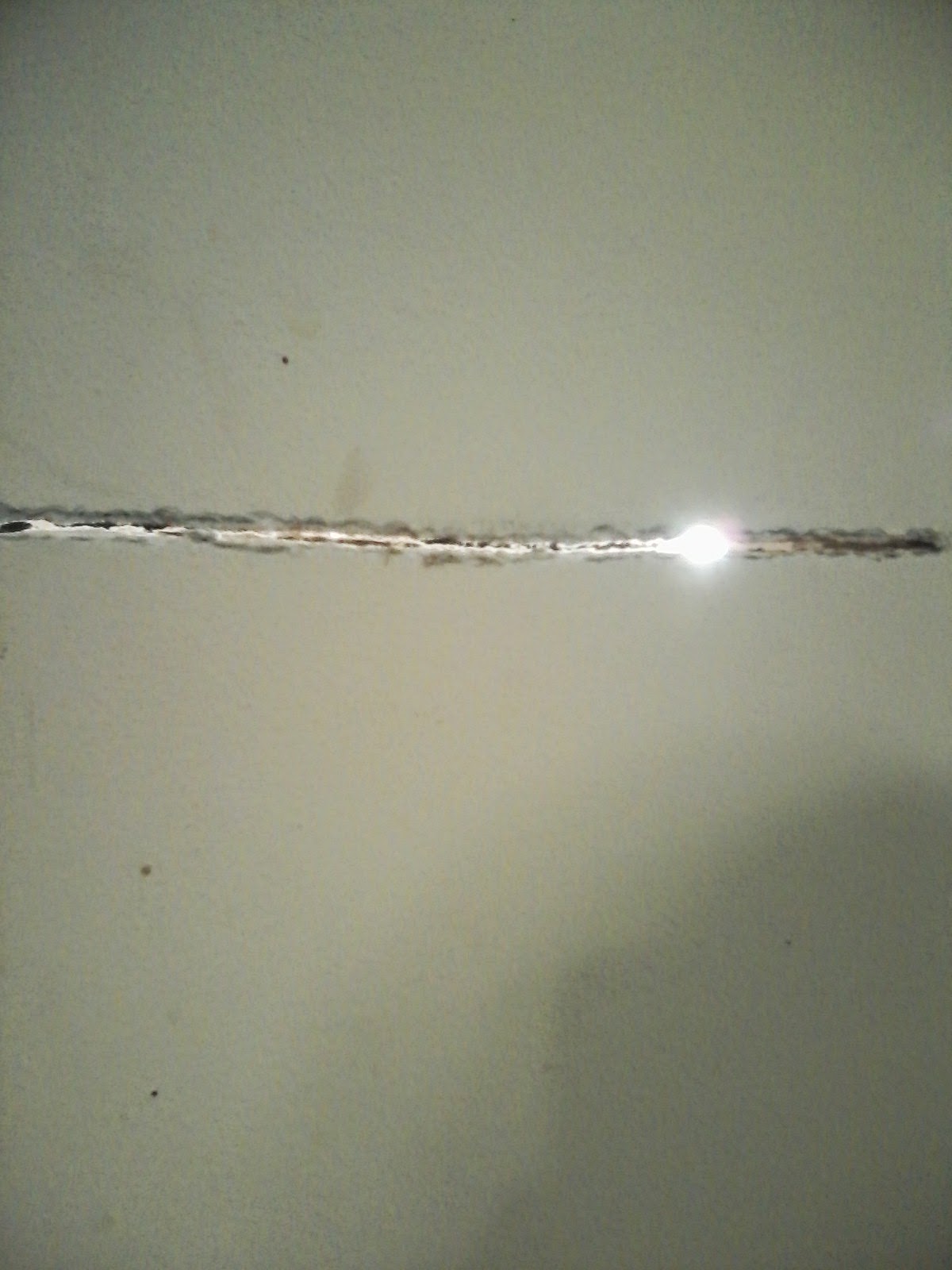 The light at the end of the tunnel has been found.

Then it became a kind of race, which with twins, is par for the course. 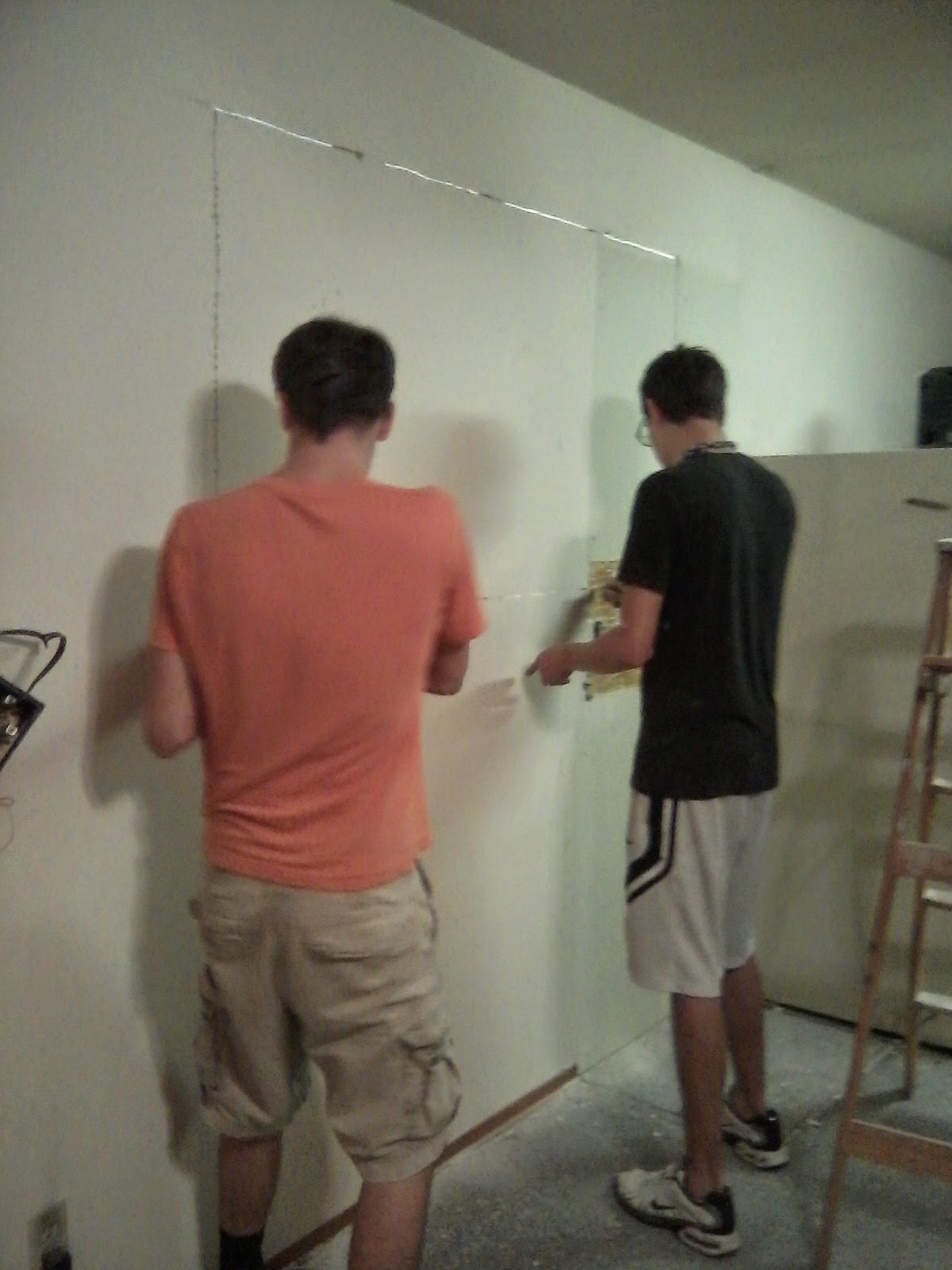 Since they had done the first side so neatly, they got to knock the whole other side out.
It was fun. 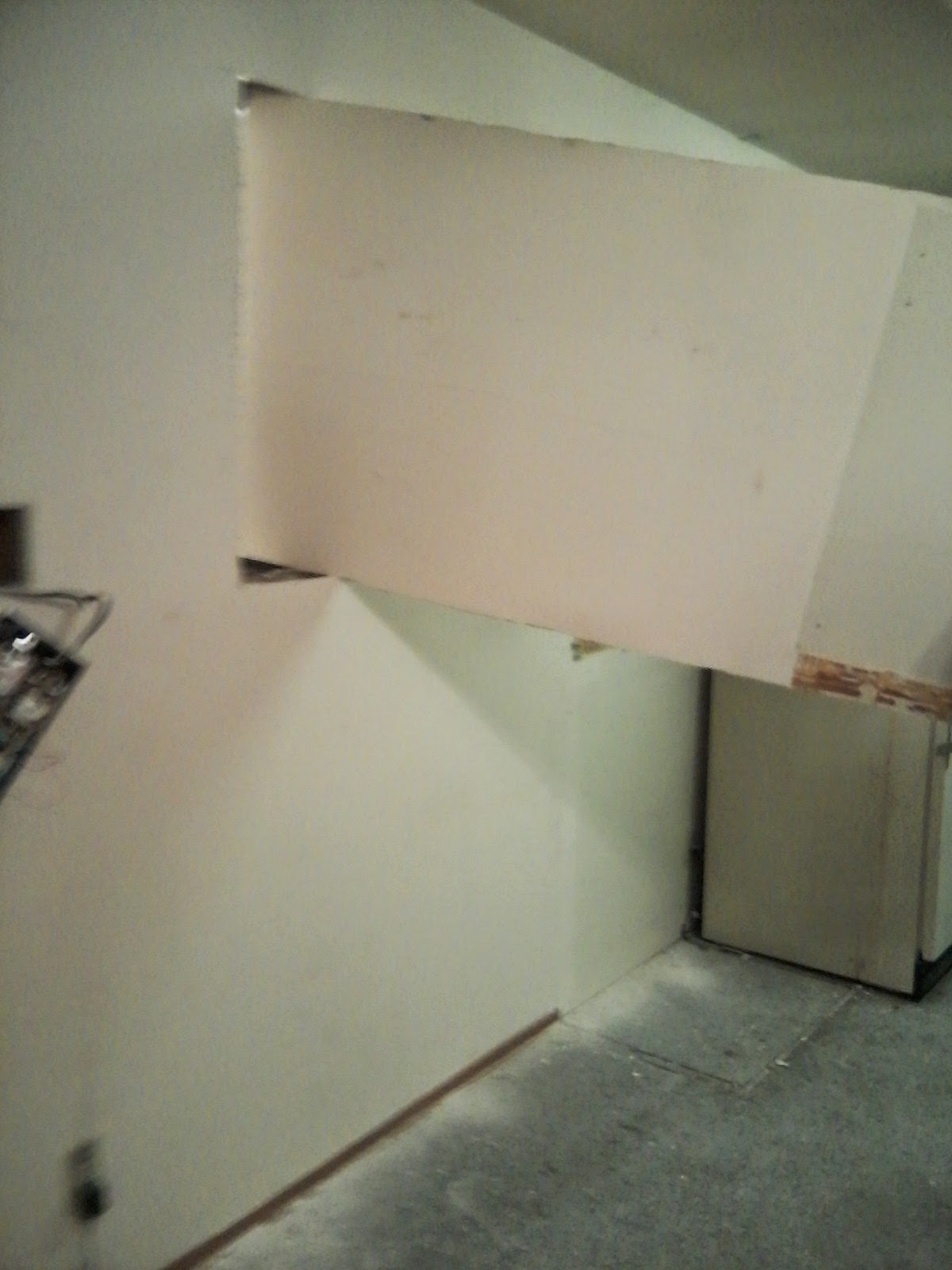 And that, my friends, is how it is done.

The boys also found renewed energy once they could see the end of this journey in sight.
They sawed faster AND did not hit any wires that would have electrocuted them.
WIN-WIN!!
Then, drumroll.............. 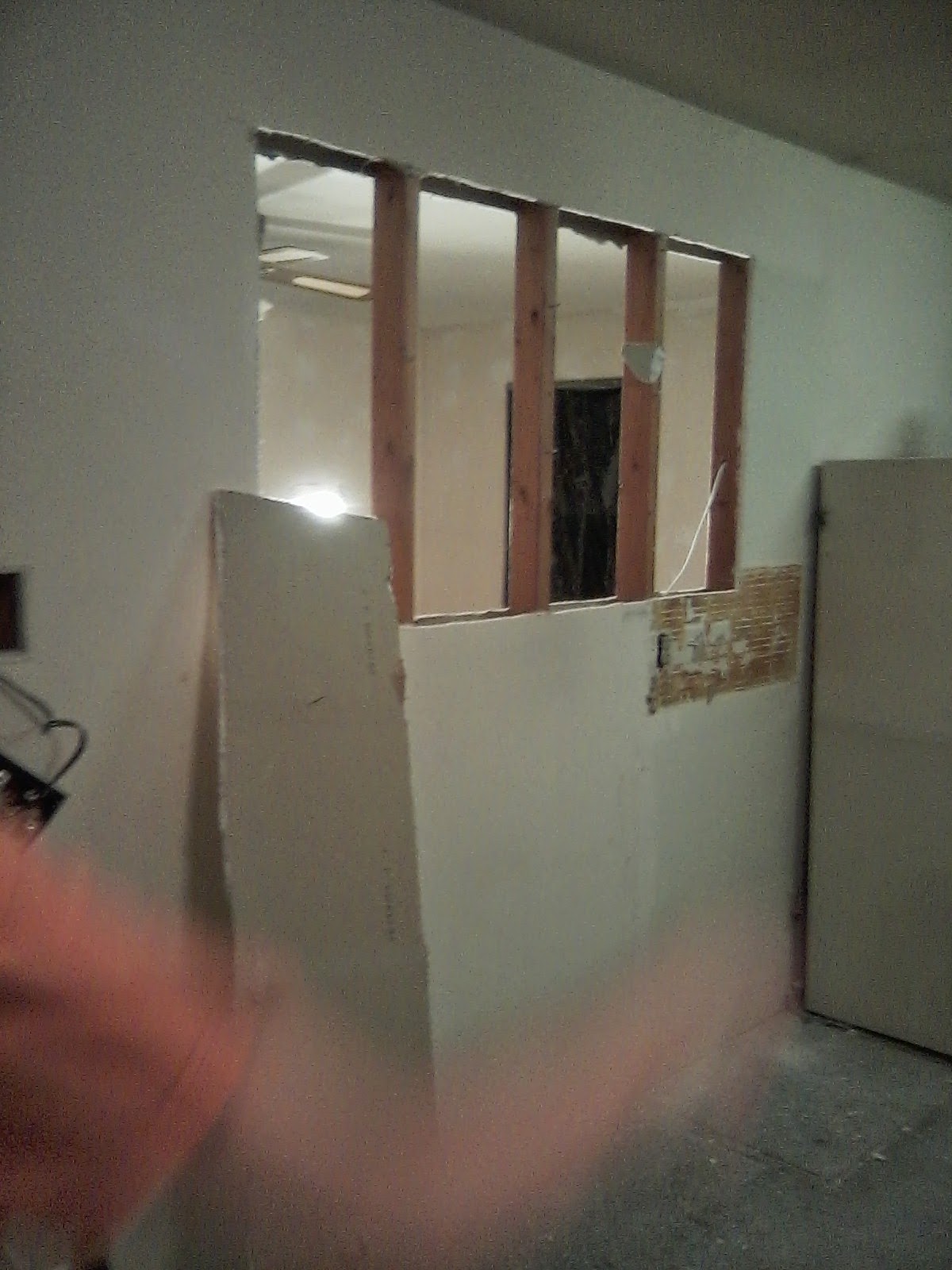 It was open.  It was light.  Air moved through.
And my oldest baby said "I feel like I can breathe better now."
Which was totally an illusion, because dust was everywhere.
However, we all felt the same way.
Illusion or not, it was much better this way.
After that, we decided to make it bigger.
Because that's just what we do.

We fly by the seats of our pants, and we do it well!  If I ever get questioned on this method, I just refer to it as a "lifestyle choice" and that seems to be acceptable.  *wink wink*  No one can question anything called a "lifestyle choice" now.  Well, they can, they just no longer have the nerve.
Amateurs.....*dissolves into giggles at the insanity that now passes for real life*

We decided on this size, minus the last space on the left because we have wires.  Wires which we now have to cover up but we know how and it will be easy.  No sweat.
Wires are good as long as you don't cut them, which we did not.  Sorry I keep mentioning this but it is an opportunity I am taking to thank God once again that we all survived.  I tell myself things will be fine, and I remind myself that we do have insurance and even an emergency room, but you know.......I still stay prepared in case of ........unexpected results. 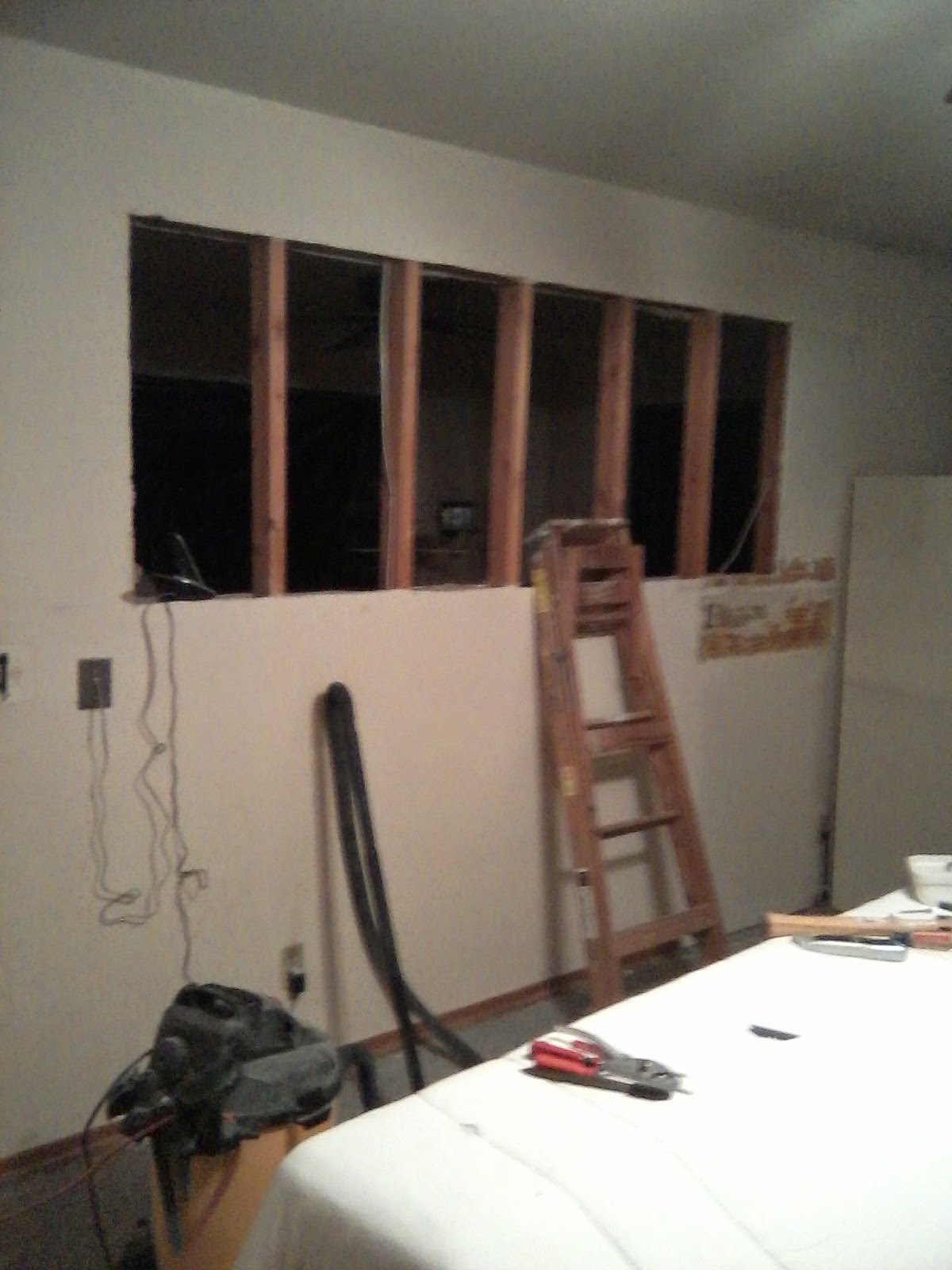 The way the kitchen will be from here to eternity, probably.

So now we return to the really dirty work of scraping and sanding.
Okay, that was a lie.
We have to start that again, as we have been lazy and dragging our feet.
Still.  Tonight it is back to it, the last of the ugly stuff.
Well, that and finding where we put the plastic forks, plates, glasses, etc.
The adventure continues......as does The Grand Finale's education, which is getting to be quite impressive.  If you are into real men who know how to work with their hands and do it right.
That is also a lifestyle choice.  One I make consistently.  I highly recommend it, but as always, you are free to make your own decisions.
Good to keep that in mind these days.
Posted by Momiss at 5/13/2014 05:30:00 PM No comments: Links to this post