It has been a long cold snap, even in Southern Missouri.  Winter drags on with everything covered in snow and ice.  People's patience wears thin and their tempers grow short.  We all wait for the gradual warming to start, the days to grow longer, and the green to peek through the muddy ground.

It has been a strange time for me.  When I decided to move back down here, I assumed that God would make my path clear.  If He has, I have not been smart enough to catch on.  This has been a waiting time for me, even a questioning time.  We probably should not question God, but whom among us hasn't?

I tell myself to be calm, give it time, and count my blessings.  Among my blessings are the fact that I am again Lindy here.  When my mother died, it was my greatest and most selfish sorrow that there would be no one left to call me by my childhood nick name of Lindy.  The funny thing about that is the fact that I had forgotten about my father.  Little did I know at that point what the future held in store for us, but within 10 years we would put aside our differences and he would provide me a safe place to live.  A place in the country, with cows across the road and the best neighbors in the world.  Neighbors who call me Lindy to distinguish me from the other Melinda's down here, most of whom are called Mindy.

So I tell myself to take a lesson from the past and to have patience with myself as this new phase of my life works itself into a discernible pattern that I can understand.  I look at all that has happened in the past almost 11 years and imagine what might happen in the coming decade.  But I still pray for signs from God that I am doing the right thing.

The strange thing is, even in this time of uncertainty and confusion, I get these signs.  In my mother's family, there exists the significance of the white feather.  In 1995 we lost my cousin, Jon Michael.  He was just 25 and had never married or had children, so it was a particularly bitter loss for us.  It felt like we had no shred of him left on earth.  Nothing new to ever be discovered about him, no child to remind us, in the future, of the joy he brought to our family.  There would be no seeing his eyes, or his walk develop as a child grew, or hearing his laugh for us, ever again.  We were just devastated by his loss.  There were many things to remember that gave us joy, though.

.........The way he used to pretend to be Johnny Cash, complete with a little guitar, and how he stopped everything onstage at the Browning Centennial to exclaim to his sister "You're spitting in the mike, sis!!"  ..........

How funny it was to watch him put his prom date in the car during the years that plantation dresses with hoop skirts were popular.........

The cars he wrecked, and the time he passed out at the grain bins on Main Street of Browning and woke up unscathed, with little memory of how he had ended up there, but a perfect half-circle indentation of the steering wheel in his forehead as proof that he had slept there for many hours.  That indentation took a whole day to fade and left a bruise.

We carried him pretty high for that for the remainder of his life.

.......How he loved watching the movie Forest Gump during his long illness and how sick we all got of watching that movie, even though it was good the first 3 times we saw it.........

It was after his funeral, sitting outside the home he had lived in since the day he was born, that we received a gift delivered from an unexpected and unknowing source.  A gift that would last in our family.  A talisman that continues to show up when we most need it with no explanation as to how it could happen.

We were sitting at the picnic table, outside the house that had been Jon Michael's home for his entire life, my mother, my aunt, (Jon Michael's mother) and me.  A little boy ran over from across the road.  My aunt was not in a mood to receive company that day, and even my usually courteous mother was not up to being nice to a rambunctious, energy filled little boy.  He was just a little boy, like all little boys, full of life and enthusiastic movement.  I wasn't even sure who he was.  I am still unsure to this very day.  It fell to me to smile at the child and say hello.  He seemed not to notice the general dark mood hanging over the picnic table, as boys will do.    He gave us a hearty hello and when he received the sad half-smiles that followed, asked what was wrong, as he started climbing on top of the picnic table.  My aunt shot him a thunderous look, which in his innocence he did not seem to notice, as I explained that we were just sad that day. I saw  no need to explain or announce death to a random stranger/child and truly was just trying to get this over with as quickly as possible.   I watched him make his climb to make sure he didn't slip on his quest to the tabletop.  He planted his small, booted feet on the tabletop and announced " I gotta surprise for ya!!"  I summoned the strength to raise my eyebrows and say "Oh?  What's that?"  I was thinking the sooner we could get this over with, the better.  I remember those exact words going through my mind at that exact moment.

He smiled a sweet smile and raised his little fist in the air.  He shouted "Look at this!" and he threw a white feather up into the air.

Words fail to describe the change  that came over us as that white feather, surely a treasure to this unknown little boy, sailed up and then started it's slow, meandering descent.  He continued to smile as we watched, with goosebumps, the feather eddying on the breeze, just like the feather in the movie that we had all come to despise due to repeated watching........and we knew that Jon Michael was all right, that even in our despair and anger God was with us, and would always be.

Thrilled with his gift, the little boy jumped off the table without injury and ran away to find more treasures, on a quest known only to him.  I know that little boy had no idea he was used as a messenger that day, and could have had no idea the change he made in our lives.  Whoever he was, he will never be forgotten by any of us.  That's the beauty of it, and that is why I know I will survive this period in my life.  I have often wondered when he found that feather.  Had he had for a while?  Did he find it just a minute before?  Did he try to show it to his mother, who didn't take the time to exclaim over it?  Is that why he headed across the street to show it off?  I would love to know the whole story but I seriously doubt that he would remember this incident, even if I could find him.

Last night I went to bed exhausted, questioning God about what he wanted me to do and why it was taking so long for me to know what, why, and how.  Jack interrupted my prayers by rushing into my room and throwing up beside my bed.  GREAT, I thought, and got up and attended to him and the mess and forgot all about my prayers.  I had terrible, scary dreams that got me up at 3:30 am and saw me still awake at my old friend, 4 o'clock in the morning, worrying about fires and demon possession and babies in my future.  It was a strange night, to say the least.  One I could make no sense of whatsoever.

Then the morning came, as it always does.  I slept late and awoke to find this on the floor on my bathroom: 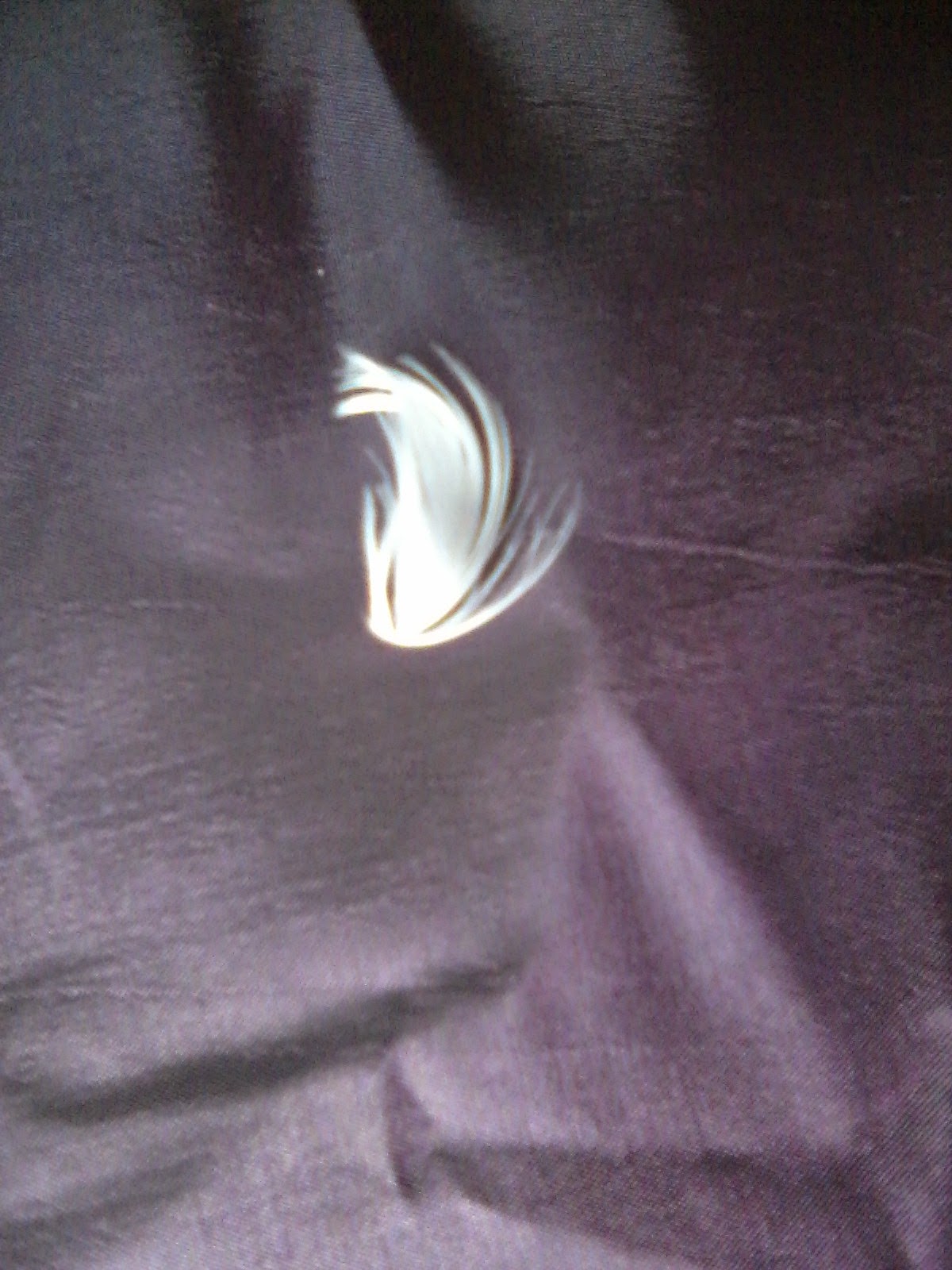 White feathers appear in my life often, and I always know whom they are from.  It cannot be denied that I have now moved to the land of white feathers, with all the chicken and turkey houses down here.  I often drive down roads that are literally lined with white feathers, when the grass is green and a truck has recently passed, and it fills me with joy.  These feathers obviously have an easily understood source, but they fill me with joy anyway.

White feathers that appear in my house, however, are another story.  These I accept as gifts and signs from God himself.  My mother called these, among other things, as God Winks.  A God wink is a little sign, if you are observant enough to notice it, that is a common thing that means something only to you.  A commonplace sign with an uncommon message meant just for you, that no one else would understand or think twice about.  Once you start to notice them, they happen often, everywhere.

In these days of winter, with snow on the ground, and the absence of feather pillows in my house, there can be only one explanation for me on this morning.  Just when I needed it most, there it is.  It makes no earthly difference to anything going on in my life except my attitude toward my circumstances.  It reassures me when nothing else can.  It makes no sense but all the difference in the world, to me.

Sometimes, when we are out of patience and fighting to hold onto our faith, when anger invades our souls, when all our thoughts are about ourselves, we need to trust.  We should stop, breathe, and hold onto our faith.  We need to realize that everything is not about us.  Often, unbeknownst to us, it is our turn to be a messenger for others.  God may be using us to help someone else, in ways we could never know or even guess at.  We may never get to know who, what, why or how.  It doesn't matter.  All that matters is that we pray "Thy will be done", and trust that it is, it will be, somehow, someway, whether we understand it or not.  I continue to wonder what will happen next in the land of Lindy and white feathers, but I'm still willing to wait.  Maybe that's just the lesson I'm supposed to be learning now.  Perhaps patience is the lesson, or perhaps the lesson is just to be still, and know that he is God.  Whatever the lesson is, today I can resign myself to finding out in His time, without fear.  All because of a white feather on my bathroom floor.


His eye is on the sparrow, and I know He watches me.