It's been such a strange year weather-wise in 2013.  It's been great, don't get me wrong, but the way I figure it we are about 2 months behind.

So now that it's June and is finally warming up, we are experience spring at last! 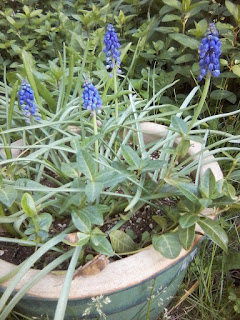 I got a great deal on these bulbs about 2 years ago.  This spring I was moved to finally put them in the dirt.  They had begat more baby bulbs while lying on my kitchen floor in all that time.  They FINALLY bloomed.  Well, 4 of them did.
Not only have we been dealing with bird nests and trying to save their eggs, but everywhere we look nowadays animals are either making babies or raising them.  Usually we go through this in late April or early May.  This year things are running a bit behind.  The eggs I put into the wren house have not been kicked out, that I can tell, as of yet.  Still don't know what will happen there, but hey, we did what we could.  Mother Nature is what she is.

At work we recently had a Blue Heeler dog show up.  It was a female. She kept to herself, very much so.  At first we thought someone had just inadvertently brought her to town, but that turned out not to be the case.  She stuck around, so what could we do but feed her?  It stared with the crusts of sandwiches at breaks and dinner.  She still wasn't exactly cozying up to anyone, but they are really smart dogs, and we wondered if she hadn't been lost from the sale barn.  Couple days after that, she had some pups under a pile of aluminum in the yard.  This changed things, and in the best possible way. Sometimes when the world looks darkest if you will look down at what is right in front of you, good things are going on, too.  The trick is to notice them.  After she had those pups, everybody upped their offerings of scraps, dog food, farm eggs to mix with the food, milk, you name it.  Keep in mind that there are exactly 7 females who work at my place of business.  Of course we were involved, the one primarily outside being the nurturing presence that got the dog tamed down to be petted, but mostly I am talking about men here.

All I can say is that sweet little dog could not possibly have been dumped out, full of babies, in a better place.  Within 10 days of her having the pups, she was tamed enough to be petted, at least by the nurturing lady outside.  She would flinch when any hand was raised, and stayed clear of any man, but she knew what time feeding time was and allowed the woman to pet her.  We concluded she had not only been dumped full of puppies, but been beaten. By a man.  Whether this is true or not cannot be known, but we felt we "knew" them with our women's hearts.  At any rate, one of the men who lives on a farm offered to take the dog and pups home until we could give the pups (and maybe the dog, still not sure) away.  He was strongly urged by his own wife's heart in this, and in this way females always come through for each other. Especially when there are babies to consider. ;D

Add to that the fact that in a very short time we would have several (6 as it turned out--3 girls, 3 boys,) pups running around a busy parking lot with semi's traveling around.  We did not want any squished pups, however unwanted or unplanned they may have been.  Then add to that the fact that we had a mess of bunnies born around that same time, several of which we are pretty sure added to the new mother's diet.  We told ourselves that that is the way of Mother Nature, and indeed it is.  Still, something had to be done.  No way we were taking those babies or their poor mother to the humane society. No one was getting rid of these dogs unless it was one of us, and nobody wanted that to happen.. On that we were agreed.  I haven't seen so many people agree on anything so readily for a very long while.

It took the nurturing woman to get the dog into the kennel for transport, and the dog trusted the woman to bring out the pups.  Reports are that they are settling right in out in the country.  The pups eyes are open, they are crawling everywhere, and we have yet to start guessing what the other half of the equation is, not that we really care.  Those pups are fat and happy, fuzzy and sweet as all pups are, and we are currently collecting money for their first round of shots.  If you happen to live in the area and would like a free 1/2 blue heeler pup is about 6 weeks, leave a comment or send me a message and I do believe I can hook you up.  Mama is black shot through with some white.  Papa was a rolling stone, and we are quite sure he won't be showing up to fight for custody.. 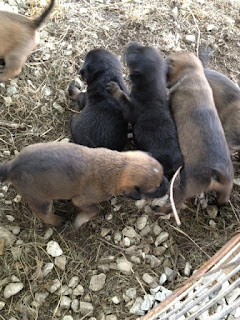 Work is not the same without the dog.  We miss the dog, but we do have a bunch of baby bunnies that run around in the yard about every time you come in or out the front door.  It's really fun, not just for us but every one who comes in says "Do you know you have some baby rabbits out there?"  Do we ever!  We saved their lives!  They don't know enough to be afraid of us.  But then I don't think they have anything to be afraid of, with us, either.  Are they ignorant or solid judges of character?  You decide. 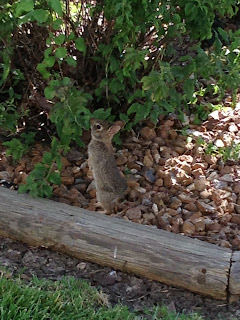 "Hey! Did you know you had a bunny out there?"

I am very proud to work where I do with the people that I do, all in all.  We know how to take a little hope and run it around the edges of a bunch of scrap pieces, good for nothing in and of themselves.  When all the pieces come together in the end, though, it is very beautiful thing that lasts a very long time.
Posted by Momiss at 6/18/2013 08:12:00 PM No comments: Links to this post