Sorry it's been so long, for the few of you who follow this blog.  It's been quite a year, and I will probably blog about it in the future, but not today.

Today we made a mad dash to the garage to look for Christmas tins. I've been busier than I normally like to be for a while now, and haven't done much in the way of Christmas other than buying and throwing stuff in Wal Mart bags  wrapping presents.  Oh, and I put up the wreath.  That's it.  That's been my preparation.  I kind of miss putting up the ornaments, but I just got them out and looked at them last weekend and was satisfied.  We don't have room for a tree other than the little one with lights that I did not bring in from the garage today.  I've been sick.  And tired.  Sick and tired, and  that it is no doubt part of why what happened next hit me so hard.

During the search, My Youngest Baby found his Christmas stocking.  Joy registered on his face followed immediately by concern if not fear when he realized it was dirty.  He turned to me and held it out, asking if it would be all right with fear and hesitancy in his eyes.  I told him that it would, and that I would wash it.  He seemed relieved that it would be all right, and then pressed me as to whether or not I was going to hang up their stockings this year.  These stockings were knitted by my children's great-great aunt Ada and are the only stockings they have ever hung up.  There it was, a bit bedraggled but waiting for us.  It knew we would come.  We have never failed it, not one single time.

I said "Of course I am!" and managed not to cry until I got to the privacy of my bathroom and there I had my own little grieving session.

This is the twin's last year at home, as far as I know.  They are 18, and will graduate in 5 short months and go out into the world and have wonderful lives, which is all very well and good.  I want them to!  I swear!!

What I did not know was how much it meant to him (my last, the one that needed the most for the longest, the one who has bloomed into a young man at ease with himself) that his stocking was put up.  Still, like it used to be.  Like it always has been.  On the outside he looks like a man, but inside my little boy still exists, peeking out at me on occasion.  How I miss that child.

If you live long enough, and I'm sorry to be the one to tell you this, you will realize that eventually Christmas becomes a crap shoot, emotionally speaking.  It can be as bitter as it is sweet.  Lots of your memories will be of people who you love just as much, but have already passed, and the ache can be borne, must be borne, but the ache is added to.  Almost every year, it gets added to.  Another thing that has become clear to me in this last year or so is that I have reached the age where I am going to keep losing people.  It inevitably happens, and don't we all know this?  In our minds?  Yes, of course!  But there will come a day, eventually, when it dawns on you that you need to get used to it.  There is not even an "if you can" attached to that thought.  It's kind of brutal, but fear not, you will be pretty numb and it won't hurt that much.  You will be "resolute".
res·o·lute
ˈrezəˌlo͞ot/
adjective

Okay, your goal will be to be "resolute".  Good luck.  It's a tricky little dance but the steps will come to you when you need them the most.  May you dance right through it.

My thoughts of late have been heavily filled with memories of my children when they were little.  Crystal clear in my mind, right down to how their necks smelled like........ and how they felt against my chest as I held them close to me and kissed them there......... what they looked like asleep............... and funny things they said.  I guess it's my way of soaking in this last year before the nest is empty.  I don't know who I would be without them, and I needed this reminder.  On my "cry-y" days, as I call them, I despair that the mother they remember is the one who "nagged" them about their room, or a job, and they never remember, or can even know how much I loved them, sacrificed everything, cleaned and nursed and coached and sometimes scared other people to death in defense of them.  Basically I have felt like I've been left alone with my memories, but only on the "cry-y days".  Those days are not my favorite, but they come and they must be dealt with.  I deal with them in the bathroom, and just say I'm tired when they notice my eyes.  This song sums it up perfectly.

I thought my kids were too old for Christmas, one of the worst things I think I've ever done as a mother.  Don't I know the most important thing you can do in the world is NOT to change?  Yes!  I know this!  (One of the worst things about being a mother is when the Voice In Your Head lectures you and you have no good excuse, so instead of trying to defend your worthless self, you just vow to do better in the future.  But you know the kids will always remember the time you DIDN'T!!   The struggle is REAL!)

The last year there have been things I was forced to change, but nothing that really bothered me.  I just walked on.  Some of the best advice I ever got in life was not actually advice about life, it was about golf.  It applies both places equally well, and that advice was this:  Advance the ball.  Do not stand there, anxiously plotting on how to hit that ball a mile (is that a long way for golf?  I don't even know.) and make sure it rolls within 3 feet of a little hole.  Just step up there, breathe through it and advance the damn ball.  One stroke at a time.  It's not really that big of a deal.

So today, instead of filling the Christmas tins we were looking for with cookies and candies,  as I had planned, I washed and hung up the stockings we were not looking for but found just in time.  My heart was pierced and I adjusted and advanced the ball.  I brought that stocking in and washed it on the delicate cycle.  I hung up both my baby's stockings by the chimney, with infinite care.  It might be the last time I ever get to do that while they are home.  Like it used to be.

Have Yourself A Merry Little Christmas  from our house(es) to yours.  I wish you traditions and everything as close to the same as you are lucky enough to have this year.  Treasure it as you should, and may the bathroom be empty on your cry-y days. 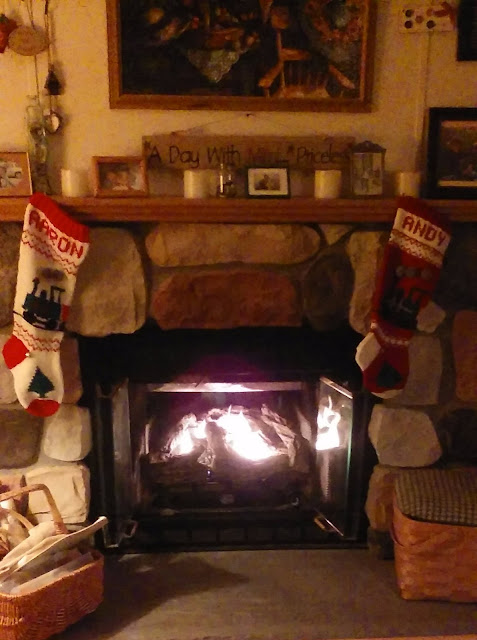