School is almost out, graduations are happening everywhere, and the roses are blooming in abundance.  Last weekend we took a mini vacation to see My Fourth Son graduate.  It was good to be back and visit everyone.  We even took the dogs. 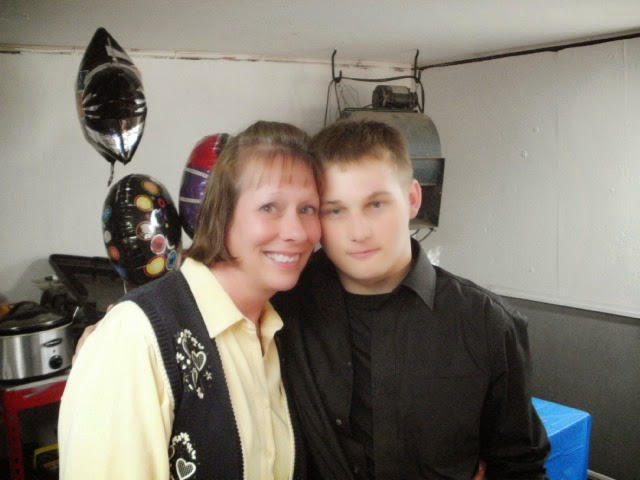 My Fourth Son.  When I met him he rode a bicycle and educated me on the reasons why Mongoose was the only brand of bike he would ride.  He is a young man and an old soul, and I love him like my own.


My Oldest Baby and I shared a bonding experience when we got stuck on the side of the road on our way home.  Jack was riding with him in the truck, proudly sitting in the middle with his ears flying back in the breeze of all the open windows.  Shadow was riding with me in her royal carriage of (the allergic alternative to Down) featherbeds with the entire back of the car to herself.  I have about mastered the art of driving, watching traffic ahead, and simultaneously making sure my children are following me.  When they drive badly, though, things tend to go downhill.

When I noticed My Oldest Baby weaving, I slowed down, as did he.  But then he was leaning down, Jack had disappeared, and I was asking, out loud, with some very bad language, what was going on.  Shadow was looking at me with an expression that clearly said "I don't know what your problem is, but I had nothing to do with it.  I'm just laying here minding my own business."   That was about the time he straight up crossed the center line and all I said was "That is IT!" and pulled over to the side of the road.

It had rained, a lot, the night before.  Storms had moved across the entire state.  When My Oldest Son pulled over behind me, the right front wheel dropped into the ditch, the entire truck settled in for what looked to be a good long nap, my son's head dropped forward in defeat, and both dogs were standing up, tails wagging, ready for their next adventure.  I was happy nothing too bad had happend.  Being stuck is not too bad.  It's happened to me more than once, and being stuck is not a huge problem in this world.

We examined the situation, decided to use one of the (allergic alternative to Down) featherbeds as traction, and then proceeded to rock that truck back and forth, getting what looked to me more stuck with each pass.  Mud was flying front and back, alternatively, and Jack's mind was blown as he tried to stay out of the floor board because the noise of the wheels spinning scared him.  I'm trying to sooth him as I wonder how exactly you blow a transmition, because I'm thinking that will be the next thing that happens to us.  About that time we were rescued by a man name of Mike, who stopped, had a chain, and opened with a joke about a Dodge pulling out a GMC.  He was a great and kind man, gently explaining that there was no good place to attach the chain, and if we were all right with losing a bumper, he would try to gently guide the truck out of the ditch.  We were ok with that, and we got the truck out of the ditch without losing a bumper.  So thank you Mike!  We forgot to take a picture, but My Youngest Baby was now covered in mud from head to toe, and I am pretty sure I have more gray hairs than before that day.  The good news is that my constant harping on what can happen when you "just drop a wheel off the shoulder" has gained some serious street cred and the kids have stopped rolling their eyes when I quiz them about various mechanical aspects before they leave on trips.  Have you checked your oil?  Tire pressure?  Spare?  Do you have a blanket?  Water?  Something to eat?  Extra clothes?  Extra boots?  Gloves?  Map?  Poison Ivy Lotion?  Allergy pills?  You get the drift.  Kids seem to think mothers enjoy asking these questions.  That is not true.  In truth it is exhausting, and should we forget something it is sure to be our fault because we forgot to ask.  It's not fair at all and sometimes a kid needs to be stuck and covered with mud along a semi-busy highway before they start to realize that there is a point to being harangued by their mother after all.  Extra points to you if you can manage to be WITH your child when this happens.  Those memories don't just make themselves, ya know.

At this point it was decided that both dogs would ride with me, as Jack was apparently the reason for all the weaving.  Within the next half hour I inadvertantly rolled poor Jack's head up in the back window, and then did some weaving of my own as I frantically punched buttons trying to free him before he choked to death.  If it's not one thing it's another, don't you find that to be true?  After that, poor Jack seemed not to be hurt except for his feelings, and curled up in a ball in the very back, facing away from me.  I felt terrible, but we made it home safe and sound.  It brought to mind this post, in which Kelsey asked if it was worse to text and drive or parent and drive.  My answer is PARENT AND DRIVE, Kels!  You can turn your phone off, after all.  Not so with children or pets.

After that I could settle down, and in thinking about how good it was to see everyone, and to see the boys there to share that time with their friends, it brought this poem to mind, by Ernest Dowson:

With all the roses blooming and all the love and joy around, it seemed only fitting to make some Rose Petal Jam, so I did.  The recipe is within the link, and I highly recommend it. It is absolutely wonderful, as well as beautiful, and it doesn't take much time to do, either, once you pinch the white parts out of your petals.  For me, spending awhile touching rose petals and sorting them out was my favorite part except for hearing the lids pop.


See how pretty they are just in the pan?  Blogger is having issues with me uploading pictures today, so I can't show you what they look like after this, but they will lose their color.  Do not worry, it will come back as soon as you add the lemon juice.


This is the finished product.  It tastes as good as it looks, and how could you not take advantage of all those petals, just sitting their waiting for a practical purpose to their lives?  They aren't just pretty faces, ya know.  They have worth that goes way beyond that.

I'm listening to more lids pop right now, having been up late with dearly beloved friends, some of which spent the night, and up early this morning getting them all sent off for their days.  I'm good like that.

Next I am going to see about using the rose petals to make jelly, and you can find that recipe here.  For the price of the sugar and some lemons, why not?  And next spring I am going to try to catch the Violets in time, too, as this recipe works for several edible flowers listed at the bottom of that post.

They are not long, these days of wine and roses...........The jam and jelly that I am making during these days will be my handmade gift this year.  I hope it has been infused with all the love our family has seen and commemorated this weekend.  The memories these boys share with us, their parents, span what I hope they always remember as the best years of their lives.  Those years have certainly been some of the best years of my own.  Thank you, boys, for all the nights no one slept, the empty cans of chewing tobacco, the 16,000 firecracker stunt, the firsts, the lasts, the list of foods I make that are, according to you, "the best", and the yet to happen.   Make the most of every day you have and you will always have a good life, even when you are stuck on the side of the road.  I will try to be with you when that happens, but you really don't need me, at least for that, any more.  There will be other things, no doubt, and we will get through those too.  Never doubt it.  Knock 'em dead, kid, you graduate, you.  The world is lucky to have you.