So Rosie is now 7 months old, sitting up and happiest in the middle of all the action. 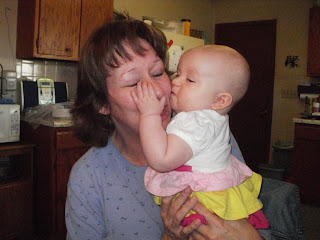 I kiss you back!  I mark you with my bodily fluids! Muahahhahahahah!

She has the funniest way of looking up at you when you hold her, as if she is checking to see whether she knows you or not.  She knows me, and once she realizes it's me she grins all over herself. Then I give her 1,000 kisses all over her neck as fast as I can.  She likes it! 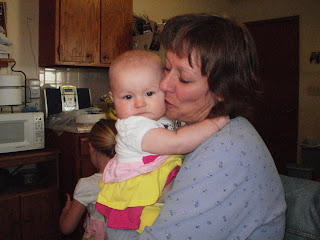 Yes, I let you kiss by kissy cheeks, nice lady who doesn't think I should be put down.

I had a little trouble during the time I had both girls by myself.  The angel showed up unexpectedly to cut some limbs for me, bringing his two dogs. His two dogs are the mother and brother to my own, so I had two small children, two big children of my own, an angel with a chainsaw and 4 dogs running in, around, and through the house for awhile.  Remember when I said I'd relaxed about how clean, or unclean, my home is all the time now?  Well, it's here to stay.  At one point I was holding the baby, sitting at my kitchen table, and one dog or another would come in and either stay or go back out, Abigail was having the time of her life with her "big boys" in the backyard, and I thought, "this is all right!"

It all worked out fine and then I couldn't get Miss Rosie Posie to go to sleep.  She wasn't cranky or anything, she just wouldn't go to sleep and I couldn't put her down and Abigail was only going to be entranced in a movie for so long.  So I strapped that baby in the car and drove around for about 20 minutes. When we got home she was almost out, but she had this thing she does where she leans forward.  What she is leaning toward  I do not know, but she's going to have a great set of abs at the very least.  I rocked her a little more and she let go completely.  I laid her down in the cradle and then I went in announced that she was asleep for the night and Abigail and I did the happy dance.  It came right back to me, just like riding a bike.  That gave us time to watch a movie together, which we do in bed, eating popcorn and drinking juice or tea.  She always announces that she doesn't get to do this at her house because "mommy doesn't like messes".  I tell her it takes a long time to get over hating messes and her mommy isn't nearly old enough for that yet. ;)

The next morning Rose and I were up early, getting along just fine when she gave me *that look* sitting beside me in the corner of the couch.  I know *that look* and so I picked her up.  It must be very hard to poop when you are sitting on a couch, don't you think?  Sitting on anything, actually.  Once I picked her up it really got to going faster.  We were in it together, I felt her pain, I told her she wasn't alone.

Soon I felt the dreaded blow out diaper leaking through her back, onto my arm, and then on my front, onto my chest.  It kept right on coming faster than I could find anything to absorb it. I started for the bathroom and it started dripping off my elbow!   Frantically I rolled my robe up to try and contain the hot, pungent mess as I raced down the hall to the bathroom.  Down went the baby onto the bathmat!  Off came any and all clothes that either of us were wearing, I rolled it all into a huge ball with nothing showing on the outside, and into the shower we went!

I had told her mother the day before that I would probably just take her into the shower with me.  Her mother said she didn't know if she would like that because she had never been in the shower before.

I am here to report that she liked it just fine.  Whether this is because she was covered in hot, stinking, radioactive teething baby poop or because we had bonded and she had decided she could trust me, I couldn't say.  Probably a little of both.  She didn't make any sounds when she was pooping and she didn't make any sounds in the shower. She seemed to be in her happy place, in fact.  I cleansed her off, talking to her the whole time.  I said I didn't know WHO had pooped in her pants but they better never do that again!  I rinsed and then I lathered up and then I rinsed her again and she seemed to enjoy it!

I washed her off, heart in my mouth, remembering the different holds, turning her, alternating the holds, and then sat her in the back, out of the spray where she had a ball trying to grab the shower curtain while I washed myself.  I don't know why I was so afraid, I've taken MANY showers with many babies, and never come close to dropping one yet.  I think it's just that I've lived long enough to learn that it can be dangerous to be over-confident.  Not to worry, though. I still got it!

After that it was just a short time until we had to go meet their mom.  I was both looking forward to, and dreading that.

Abigail said her legs were hurting and she needed to stay with me a lot longer.  No, she couldn't get up.   She couldn't feel her legs.  I dressed her like I used to "when she was a baby" and let those two little girls spend as much lazy time as possible in Mimi's bed. 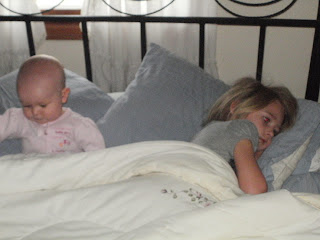 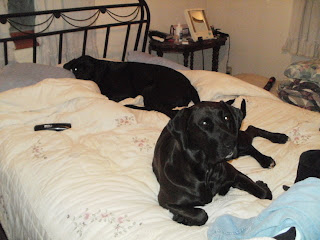 The others babies that love my bed. 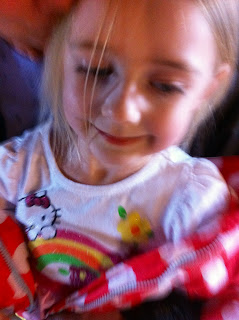 This is how she looks when I kiss her head.  I am behind her doing just that here.  This child saved me in a way.  She came along just as I was about to lay on the couch forever and let it all slide.  For her I got up, and my small part of this world has been so much better, ever since.

When we met their mom, she was impressed that Rosie tracked me with her eyes.  What can I say? She's a sound judge of character and she knows who loves her.  After that blow out diaper, there really could not be any doubt.  Only she and I know just how awful it really was.  When I got home and looked at the sweet little pink sleeper imprinted with rosebuds that was soaking in the sink, the stain went from one ankle to the armpit on the other side.  It was EPIC!  Epic in a horrible but memory-setting way! 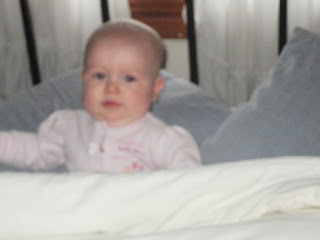 Only you know and I know, my Rosie Posie girl. ;)  Well, and now the internets.  I beg your pardon in advance, for when you are 11 and can read and get mad at me for this.

I also had a great idea.  I've always read in books about taking out stains with club soda.  I had never tried it, but I did have some Ginger Ale from making awesome waffles, and I figured I would soak the acidic stain in the greatest antacid known to man.  IT WORKED!  The stain came out.  I was so excited I called her mother who said "Oh, she's about to outgrow that size anyway."

Took the wind right out of my sails, I tell ya, but still, at least now I know.  And now you know too!

It took me a week to catch up on my rest and everything that *must* be done around the house, but it was so worth it.

Until we meet again, my sweet girls.  Next time I promise to schedule a lazy morning in there. Some things you have to make time for, and some things just can't be hurried, especially when you can't feel your legs.
Posted by Momiss at 4/27/2013 10:57:00 AM No comments: Links to this post