I had my first mammogram today.

I just heard you groan. Stop it.

I probably should have had one before, but I just never brought it up and since my mother is gone, eventually    2 of my "other mothers" did.  They made me promise to get one, and I did.  When I put that off, other mother number one (a breast cancer survivor) said she would just make our appointments together.  When she put that off for a week, or maybe a month, other mother number 2 (a breast lumpectomy graduate) chastised her and she got an appointment for us both in a week.  Yes.  A week.  I was thinking it would be 3 or 4 months.  I guess breast cancer survivors have what it takes to get in quickly.

So you will be (I hope) relieved to know that this was not my experience at all. Not at all!!

We showed up a little early. I had only 1 form to fill out, with just a few questions and not one was asking whether I had guns in my house or if I felt safe at home. I was cautiously optimistic.  The worst question was about my race, and said "Please understand, we ask this only for govt. purposes", and they gave an option for "unknown".  I checked it and thought they might be all right!  I mean, I thought, hey, they only want to know pertinent medical information. I thought it was REFRESHING!  It was like I was 25 years in the past or something, which was all right with me.

We got in very quickly.  Like, almost instantaneously.  I was more and more impressed as each moment passed.

I was taken down a hallway with curtained rooms, like dressing rooms, each with a destination above it so we wouldn't get confused. I was shown to Rome, while other mother number one was in Africa.  There I changed into a warm poncho and was asked to go into the bathroom and wash off any deoderant or body powder I might have on.  I have no explanation for this at the time, but I just did as I was asked.  Back in Rome, I was treated to pictures of Rome on the wall, which might sound strange but it was that or a People magazine featuring some Kardashian or another, and I chose pictures of Rome.  It was calming because I was not looking forward to this.  I didn't have long to wait.

In the room the lighting was low, the nurses (or technicians, not sure exactly) were very friendly. They asked me what I had heard and I told them.  They asked my why women would tell such horrible stories to each other?  I said I guessed it was the truth as they knew it.  They assured me that I would have a good experience and asked me to please give them an honest review and to try not to scare other women into staying away.

I am as good as my word.

They explained that one wondrous invention they used is a mammo-pad, which is a cushy foam pad on the bottom, and would help upon the smashing part.  I would feel pressure, but only for a couple of seconds. That was why there were 2 of them.  One to position the boob and one to work the smasher and take the pictures. It only takes a couple of seconds for 1 person to do it, but a couple of seconds is too long when your boob is smashed.  This was sound logic in my book.

My favorite part was that the upper half was clear plastic, so you could actually see your smashed boob if you wanted.  I have always been able to stand anything as long as I can see what's coming at me. As a child I could take the shot as long as I could watch. I guess I just hate being unaware or maybe hate surprises.
Anyway, we proceeded to smash my boobs 4 different times, 2 different ways, NONE OF WHICH HURT FOR A SINGLE SECOND!  It was pressure, yes.  My boobs appeared to be almost flat, which I found fascinating, and the nurse had to tell me every time to raise up my head, but she was very nice about it.  The first 2 shots were straight up and down. The second 2 shots were sideways, and I had to rest my armpit up against the machine.  This explained the washing off of the deoderant.  It was over in less than 10 minutes and I went back to Rome, where other mother number 1 joined me from Africa with a good report.

Now, the truth is that my left one had been aching lately.  Actually, ever since Abigail rolled over on it during the night on September 18, and I had not said one word about this to anyone.  Instead I did self exams all the time. I could find no lumps, but the ache was not going away.  So although I made my mothers ride my butt to get it done, I knew I needed to.  I just put it off, and that was very, very bad of me.

So I wasn't surprised at all when the technician came in about 5 minutes later and said there was an issue with my left boob that would require a sonogram, but not to worry, totally routine, and she would be with me in just another few minutes.   Yes, you read that correctly, ladies, I had my results in 5 minutes.  I am not a waiter, never have been, probably never gonna be.  This was one of the best things about this place.   I felt the dread leaking out of my other mother, so I told her about the poor old girl getting rolled over on (I started wearing a sports bra under my t-shirts when Abigail sleeps with me after that) and assured her that I was sure it was nothing.

The sonogram was uncomfortable.  And I could see that there was a big dark spot.  I started to be a little scared, but I don't scare too easily and honestly, I believe everything is in God's hands anyway. If this was cancer, God already knew all about it.

The technician saw me looking (as I am wont to do) and said "it's not cancer, I can already tell you that, but do you have much of a caffeine intake?"

Do I have much of a caffeine intake.

Oh YEEEEAAAAAHHHH.  I do. If it's not coffee (3 cups every weekday----

Ok. They are big cups. Probably more like 6 cups every weekday)  it's chocolate. Probably a candy bar a day.  How am I supposed to stand having to work without the 3 Muskateers?????

I guess we are going to have to find out.  Sigh.

I have a cyst. That's it.  That's all. A cyst that is no big deal and now that we have established a baseline, at this slightly late date, we will be able to tell if it gets bigger or smaller, depending I suppose on whether I can continue to live without caffeine,which is looking pretty iffy to me at this point.  But considering the alternative, this was a most wonderful and successful visit.

If you are putting it off, I don't blame you. That's how I played it too.  But it was wrong, so if you want to be right, and you are scared of the stories you have heard, here is what you need to do.

Call up Dr. Mark J. Malley, MD, DABR, at Imaging for Women at 816-453-2700 and make an appointment at 630 NW Englewood Road, Kansas City MO 64118.  Their website is www.imaging4women.com and I cannot recommend them enough.  It's a wonderful place, they do a great job and are only interested in pertinent information, not your personal business.  If you are from the area and wondering where it is, it is in Gladstone.  Maybe not technically, but to our minds that is where we were.  You know how funny the lines run in KC and how you can go through 3 technical cities in 20 minutes.

So do it.  Do it today.  Take a friend, there are lots of good thrift shops and good places to eat on the way.
We don't always smash our boobs, but when we do, we do it at Imaging For Women.  Stay safe, my friends! 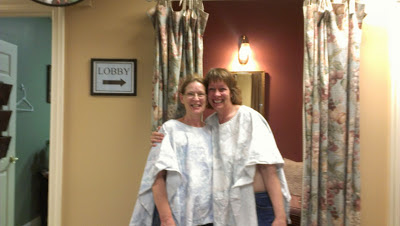