Trying to organize my family history into a coherent story is proving to be quite a challenge.  First it is going to take a tremendous amount of organization.  So far we have tended to just drag everything out, get lost looking at pictures and reading old letters and telling stories about the people we can remember.  Personally, I am not concerned, because I think this is the most important part anyway.

Where should one start?  At the beginning, with people no one alive has any memories of, or at the end, where we all know the players?  I will probably start at the end, just so the kids will be able to follow along for a little while because they know the players.  Then I will hope that by the time they get to the end they will have some small idea of who their ancestors were and a really clear idea that "who" they are is more than they ever dreamed.  In fact, I practically guarantee it.

I really must insist that when you start looking up your family history you should pay just as much attention to your maternal line of descent as to your paternal line.  All things being equal, if you neglect either side you are only getting one side of the story.  All things not being equal, the girls always get overlooked, (or LOST because their name changed) and if you are a girl, you will need all the help you can get dealing with life, and it may help quite a bit to think of your mother, and her mother before her.....and as far back as you know about.  You will be able to draw on the strength of the women who have come before you simply because you know their stories, not to mention their blood runs through your veins.  If you are very lucky, there will be an heirloom that comes to down to you, has been possessed by these other women, and you might imagine that they left a little bit of their spirits with this heirloom, and therefore that their spirits can ease your own.  I have such a piece.  Actually I have many, but we will start with the one that can be worn.

So I will start with the locket.  It is the one tangible piece of evidence that has survived to the fifth  generation of my family if you follow my maternal line of descent.  It has passed from mother to daughter 4 times, twice after a death, twice just because.  The locket has it's own story, and each of us is just a chapter in it's life.

Today, this locket belongs to my only daughter.  The chain has been replaced, not just once but several times.  The original chain was lost, the first replacement was too thin, the second one was too thick, and we still haven't gotten it just right.  The locket's shape is oval, and it is made of gold.  On the front are the initials FCS, on the back there are 4 more sets.

The Beautiful Redhead received this locket on her 18th birthday.  I worried that she was too young to be trusted with it, as it could never be replaced by any amount of money.  But she loved this locket, had always grown up seeing me wear it and hearing the story of where it came from, and most importantly, she knew the real "worth" of this locket.  It was something that she always knew would be hers, and I decided that it meant enough to her to be trusted with it at such a young age.  I have not regretted that decision.  She wears it all the time.  Inside is a picture of me and a picture of my brother.  They have been there since my mother wore that locket, and I at first neglected replacing the pictures, and then ended up having 4 children so I just never bothered the pictures on the inside.  So there we are, my brother and I , until she has reason to change whose picture is on the inside.  I also wrote down all the history so that she would appreciate the lifetimes the locket had born witness to. 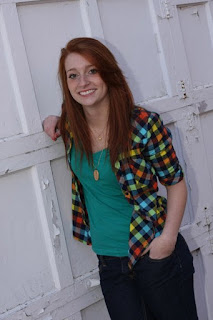 She wears the locket.  All the time.

I got the locket not long after she was born, in 1992.  My mother gave it to me as a surprise, with a sweet card that said "Melinda, our family is a family with strong women.  You are one of them." and made me cry like a baby.  She told me that she saw no reason for me to wait to inherit it when she died, and she wanted my children to grow up with memories of me wearing it, and know it's history.  I was so very excited and touched, and I write this story down now, so that it will float in cyberspace forever, proving I was a good guardian.  I always tried to wear it when our whole extended family was together.  We treasure extended family mightily in my family due to the simple fact that we have lost so many too soon.  I felt when I wore it that it signified their presence, and helped up all to be more fully together.  It might have been just me, I do so love to believe in magic, but if you are lucky enough to know your history you will notice certain patterns repeating.  Maybe it's genes, maybe it's magic, maybe it's just history, but it all amounts to the same thing when looked at from certain angles.  At any rate, I think my mom intended for me to replace the pictures then, since I too had a boy and a girl.  Two children, one of each.  Neither she nor I had any doubt that I was done!  History will prove us very wrong, not that we minded.  I do know that she asked me once whose pictures I had put in there, and I opened it up and we both laughed because by then I had had the twins and we both would have felt it was unfair to have only two of my children's pictures in it. Once I was really, really done forever and always, we added all the rest of our initials on the back.  There is room for a couple more generations there, and if it still survives they can put the initials on the inside.  It waits for Mackenzie to have a child.  A daughter.  I am looking forward to finding out where it will be going next.

When my mother Robin got the locket, it was after her mother had died.  My grandmother Helen Hamilton Hooker had a brain tumor, and many surgeries, before her death in 1985.  We girls all drew numbers, and whoever got the number 1 got first choice, and so on when we divided the jewelry.  We all knew what came down from who.  I was lucky enough to draw number 1, and I took her wedding ring, even though it wasn't expensive.  I distinctly remembered when her first wedding ring wore out, it just fell off her hand one day and  the gold had worn through on the bottom.  She replaced it with a flat gold band with a few small diamonds, but I wanted it because it had been on her finger every day for all those years.  She had prettier and more expensive jewelry, but that was the very best thing to me.  My mom picked the locket, and wore it on special occasions for the years she had it.  It wasn't really her style, my mother wasn't big on jewelry, just like Helen, but she knew where it came from and wanted it anyway.

Helen got the locket when her mother, Fern died in 1930.  She was just 11 when her mother died, after an illness of several weeks, so I assume her father Forrest kept it for her.  Forrest McKinley Hamilton bought the locket for Fern Corrilla Shively on their honeymoon.  The paper reports that "these two young people sprung a surprise on their many friends and were married at the home of her parent's, Mr. and Mrs. Henry Shively".  They would make their home in Gallatin.  They would have 3 children, a baby that died, Jessie Ruth (named for her brother and his sister), Jack Shively, Helen Elizabeth, and Harold Wayne (who was my great uncle Dobby, who recorded the tapes for us with all the stories he could remember).

A letter to my grandmother Helen from her cousin, years later, talks of how Forrest and Fern loved to dance together, and how she followed his lead so well that no one ever knew she could barely hear the music. (She had a hearing loss from an early age).  It also talks about how the cousin's mother, Fern's sister, always talked about how much in love those two were.  Later she would die young, leaving her young family to suffer through the depression without her.  Her family fought tooth and nail to stay together.  They loved one another fiercely despite everything they went through, and honey, they went through a LOT.  They were forged by fire, and strong as steel.  I know she would be proud.  You have to look, but she is wearing the locket in this picture.  It was originally on a Y chain.  I wonder if she ever imagined what that locket would come to mean to all of us who have come after. Did she imagine what we would be like the way we imagine what she was like?   She was quite a woman in her own right, and I have stories of her.  Stories that repeat down through the years and their only central theme is determination and self reliance.  I am so glad I have gotten to know this much of her.  And I am so glad my great grandfather bought her such a beautiful wedding gift.  I doubt that he ever imagined how many women would treasure it, but I know he loved every single one of us.  My daughter is the only one who doesn't remember "Pappy".  She just missed him, but she has the locket to remember him by. 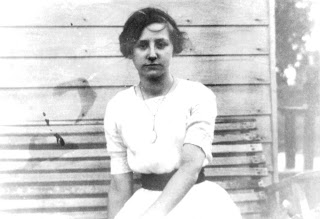 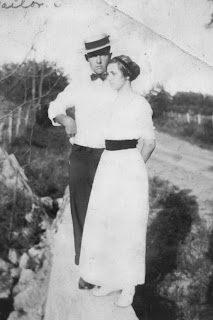