We ended the year in style at a courthouse ceremony that legalized the new daughter we added to our family this year.  Yes, that is right.  Our Rockette finally carries the family name.  We still have a lovely wedding and reception to come, but we got the paperwork part taken care of. 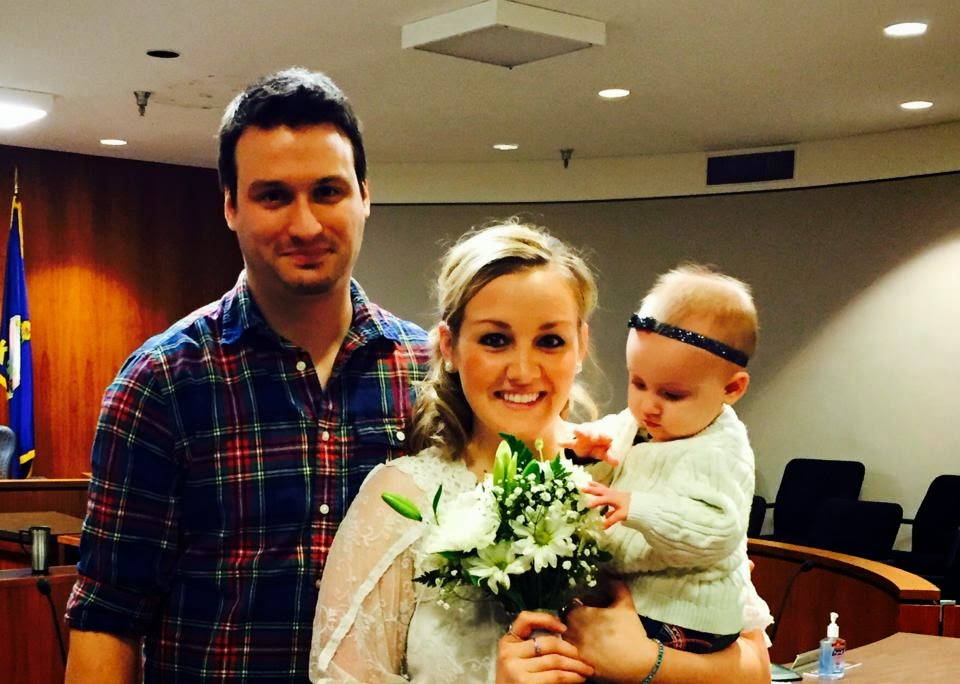 It is my extreme pleasure to welcome our Rockette formally into our family.
This woman just blows me away.   There is nothing that she cannot handle.  She worked all day on her "wedding day", came home, got ready herself, got our Charli-girl ready, remembered the ring, and the paperwork, out the door we went.  Into the bitter cold, on to the waiting, running and warm vehicle we went, when Turkey, the sweetest if most exasperating dog in the world, shot out the front door also.  The Rockette had the baby, the paperwork, the ring, and I was following loaded down with purses, diaper bag and coats, cussing Turkey all the way.  Turkey decided to jump into the vehicle but resist my serious attempts to capture and/or throttle him.  The Rockette assured me this was fine.  Not only did she stop everything she was doing and patiently, without even a bad word or wrinkle of her beautiful brow, capture the escapee and loving deposit him back into the house, but she did it all without being late to her own wedding.

I would have left that dog to fend for himself on the mean streets of Kansas City, Kansas until I decided to come home, but not our Rockette.  I knew she was good but I didn't even know how good.  Now I knew.  I think she must be an angel in disguise!

After that she zipped us through the kind of traffic that gives me hives like a pro.  All I had to to was ride in the back with my beloved Charli-girl.  I tried not to look at the traffic, or think about it either.  Instead I comforted myself with the thought that if I ever do become senile or get dementia that the Rockette would take good care of me.  Whether I know it or now, I know that she will take the best possible care of me without ever losing her temper and she won't forget any of the details.  I can truly trust this woman's judgement and rest easy knowing that if I forget some of the details, she is on the case.

Once at the courthouse, being the last to arrive, we had to go through a metal detector and have everything scanned.  I was about ready to sit down and cry by then, but she set a good example and I just followed along.  I marveled at who the adult was here, because it was not me.

A short ceremony followed, with just a few tears being shed, even by me, because this was such a happy occasion.  An occasion that we have waited for and were blessed to attend.  We got a few pictures afterwards, during which Charli tried to eat the wedding bouquet and learned that flowers are not for eating.

Due to the time, the courthouse was shutting down so we had to make our way to a particular door.  I never knew which one, I just followed the crowd.  We had to split into two elevators, and though our elevator was supposed to go to floor 1, a whole bunch of us ended up on floor 8, and had to try again once we realized our mistake.  If you must be lost, always do it with a crowd.  Safety truly is in numbers.

Eventually we all got to the door we were supposed to out and then all that remained was to try and find our cars in the bitter cold.  The Rockette did this also, owing to the fact that The Rock Star (and herself) have been sick for several weeks.  The Rockette deemed the Rock Star too sick to go find the car and faithfully brought it around while we waited in the warm foyer with our Charli girl secured in her car seat under some blankets.

We went to dinner, all of us strung out along a long table.  The Beautiful Redhead and Magic Man showed up along with some friends of the couple's from work.  I looked down at our two families, now joined as one, and thanked God that this couple had found each other and brought us all together for the rest of our lives.  Babies were passed around, everyone was smiling and visiting with each other.  My own Beautiful Redhead's laughter pealed out at one point, filling my heart and eyes with wonder and gratitude that we were all there in the moment.  Also thinking ahead to the day when we would once again be joined for her own wedding day.  I assume it will be the Magic Man she marries that day.  If not, a whole lot of hearts will be broken wide open because we love him too.

If any doubt remained that our two families were compatible, they were put to rest in a hurry when a rude, and quite possibly drunken woman yelled at my own Rock Star to "shut the damn door" while we were carrying stuff out after dinner.  The Rock Star is by nature a pretty mellow fellow, and he tends to get upset rarely but memorably like his mother.  Add to that the slow burn that may smolder for decades but never be forgotten, which he gets from his father, and you have a formidable enemy that looks so good and seems so nice you would have a hard time believing it until it happens to you.  3 of us followed him to the car, listening to the Rock Star rehearse what he was going to say to that woman all the way to the car, back through the restaurant and back to the room we had dined in, I was readying myself for true battle.  Not to worry though, I should have known The Rockette herself was handling that with panache in the time we were gone.  By that time the rude woman's date-or husband-or whatever, had told her she was embarrassing him, to which she indicated that she didn't give a damn about that either.   That poor man was doing all he could to make himself invisible.  All I wanted to say was "Have another drink, honey!", because I learned years ago that alcohol does not usually complement your basic personality or endear you to those who are not inebriated also.  The most you can hope for, I have learned, is that they pass out quickly.  Hence the phrase "Have another drink!"  And be quick about it!  Could I interest you in some grain alcohol?  Because we don't have all night!  The entertainment they provide, I must point out, cannot be replicated or topped by much that I have ever seen.  :D

At any rate, I believe she rued the day she had let her mouth get away from her as 20 people bore down on her and quite effectively brought peace and order to that restaurant once again.  It was actually one of the funniest things I have ever been lucky enough to witness and I can report truthfully that our families are truly united, for better or for worse.  We rose as one, with even the babies paying attention.  We are in this together, come what may!  The enemy was vanquished in short order.

It certainly ended the year 2014 on a memorable note.  That's all I've got to say about that!  I daresay no one who was there will ever forget it.  One marriage starting out strong, one possible marriage limping along.....if that "lady" was on a first date I doubt there will be a second.  Just saying.

Somehow I just know the wedding and reception will fall a little short on memorable episodes.  At least, that is my hope.  I suppose it is always best not to rule anything out.

So bring on 2015!  Here is to the first of many happy years with the new and formidable Mr. and Mrs. Clark, with all our love, good wishes and unquestionable support.  I just have the best feeling about this one.