I was the first grandchild on my mother's side.  For three years I ruled the kingdom and during this time I proclaimed my grandmother "Big Grandma".  This was not because my grandmother was big.  In fact, the first time I called her that I can remember how she laughed for a very long time and finally asked me why I called her that.  She didn't seem especially touched by it.  I had two grandma's that lived in her town, as I thought of it, her mother lived there also, my great-grandmother.  The only explanation that I had then, and the only one that I still have to this day, is that my grandmother  was taller than my great-grandmother, ergo, "Big" Grandma and "Little" Grandma.  Little Grandma didn't seem especially pleased by her name either, but it seemed completely obvious to me.  I, being naturally shorter than either of them by quite a distance, did not know that they were both actually very small women.  Be that as it may, they were both referred to by those names from that day forward.  Nobody argues with the first grandchild, I tell you.  Nobody.

Big Grandma always had a bird nest on her Christmas tree.  She said it was good luck for the next year.  I can remember her getting excited about finding small abandoned nests.  She sprayed the holy living crap out of them with Lysol and put them in trash bags, to "kill all the bugs", for weeks and then shellacked them.  Probably to seal in the bugs, just in case any survived.  Or laid eggs that could hatch.  She did not suffer dirt, she put on a whole uniform including a scarf over her hair and attacked it mercilessly. 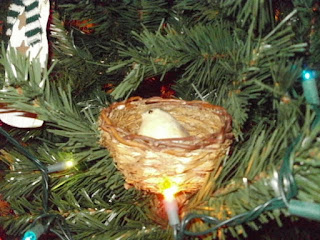 It's not a real one.  It was a gift from my mother, in memory of the one Big Grandma had, for my own house.   It's the oldest tradition I have.

Big Grandma was very crafty, even artistic.  She was always whipping up something or other and there wasn't much space between us, which is probably why one year I made my own ornaments as gifts.  The Santa below is another of the cute wooden ones that move around, but to the left of it and below with the pink and blue swirl is one.  You simply buy an empty ornament and whole bunch of paint, pour it in, swirl it around, and waa-laa!  Beautiful ornaments that will last as long as you don't break them, but hey, that will just be the year you broke the pink and blue ornament that you made when the twins were small, and waa-laa!  There's a memory.  That's the way it is with Christmas ornaments that you know.  They never leave you.  This cannot happen with new ornaments.  Unless it's the only new ornament, in which case it will probably be special, in which case you could make a memory if you broke it.  But only if you cared about it. 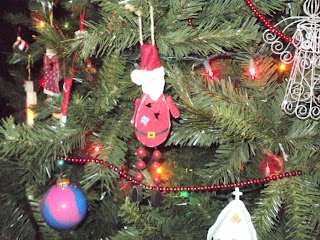 You can swirl any colors you want, in case you have a different "theme" going, or want to match your furniture or something.   However, if you make these please give them as gifts.  They will be treasured forever.  Unless they are sold at a garage sale.

Another good use for the empty ornament is to put cute stuff inside.  Pictures, confetti, in this case golf tee's.... these are unique and one of a kind gifts, inexpensive to make, depending of course on what you put in them. 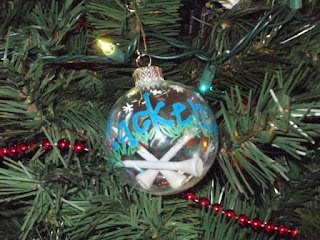 One of the Beautiful Redhead's, from her golf coach in high school and safe from garage sales forever and ever, amen.

If you knit, and I am ashamed that I don't, this is an excellent choice.  In fact, so ignorant am I that I do not even know for sure whether this is knitted or crocheted.  Probably crocheted.  Isn't that the one with all the holes?   Whatever it is, we should all learn to do it and I am pretty sure my Nana is rolling over in her grave right now because I would never learn this most basic skill when she tried to teach me.  I regret it.  It can't be that hard and I need to get that started.  It's been on my list for decades.  This one was given to me by a friend I worked with named Janet Turner in 1993.  I have put it on my tree every year since and I always stop and think of her.  I always thought I would do that for the kids every year, if I could......do that stuff, but I've not gotten around to it.  My babies are 14.  I need to get started soon. 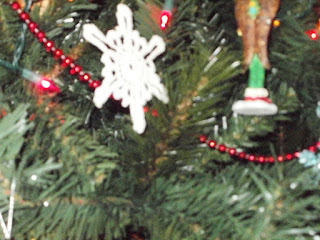 They say no two are alike.  That is just one added plus if you are nervous about making mistakes in knitting. Or crocheting.  Maybe by next year I can inform you further on these mysteries.