Since Christmas was so strung out this year, this post covers a lot of time.  It was not all spent crying over the trashcan and coming late to the realization that your kids have left home...........5 years ago.  hahaha

Our house was visited by the amazing Abigail for a few days recently and I must say she adds a lot of sparkle.  Literally.  She came equipped with silver sequined boots and silver glitter ballet slippers.  To see those sparkly things in the pile of size 12 sneakers did my heart a world of good.  She came along at a time when I really needed her and has gotten me through some dark days.  (Ok-years.....but you see how perfectly it all works out?  And now another baby girl will be following in her footsteps.  I'm simply not the type to turn bedrooms into closets for myself.  I come from different stock, a more welcoming and less self-obsessed kind. ;)  No telling how long I can stave off the realization that the twins are gone before I have to face that, this way!  See?  There is a method to my madness.) 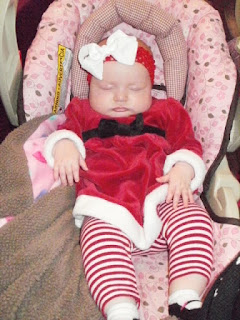 Adriana...you can see she is coming along beautifully
Her boots and shoes were only compliments to the rest of her wardrobe, which consisted of lots of tulle ruffles, sequined skirts and glitter leggings.  The dogs were the most thrilled of all.  Not only did she sparkle, but she moves a lot more than any human they have ever seen in the house.  A lot more.  They faithfully followed her everywhere she went and the three of them had a really great time playing a version of "the floor is made of lava".  This is what they did while Mimi tried to figure out how to get the video game player to play a movie......for 30 minutes......while she had one of the twins on the phone telling her exactly what to push on the controller.  He finally just had to come home, as his mother is so unfamiliar with controllers that it never occurred to her there are buttons on the front of the thing.  I couldn't even figure out what the buttons on top were supposed to do.  I'm proud of that, in the big picture.  Video games are one evil I have completely avoided.  It figures that I would pay the price when all I wanted to do was watch a simple video.  You say technology has advanced.  I say it's advanced right into the sewer, that's what I say.

So I let her open a Christmas present early. 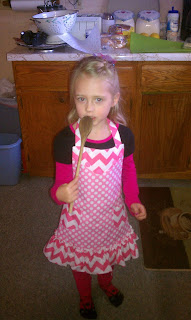 Apron by Cheryl Arnold Craig of Cheryl's Sewing, Unionville, MO.  You can find her on FB or at    her blog

I think it is as adorable as she is in it!  We got to work right away.  I had several things already mixed up and ready to dip or bake, and we did both. 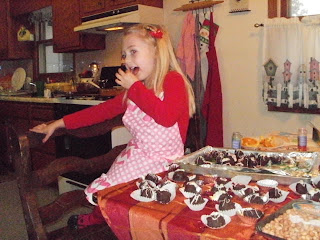 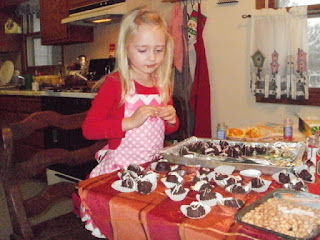 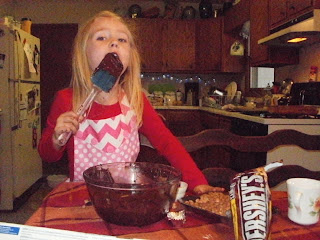 You always have make sure it's "fit ta eat"

We also had nice talks about who she was, as she is a big sister now.  She is not a baby anymore, but she is MY baby (her blue eyes looked up for confirmation at this, which I gave with alacrity).  She is a kid, not a big kid, though.  A little big kid, or as she put it "a widdle big kid".  She is just at the age where she still can't say some things and I try to hang onto these days especially hard.  It was interesting to see how she sees herself, not to mention me.  I know full well that the days when she knows everything already are just waiting a little ways ahead, so I intend to remember every one of these sweeter ones while I can.  Guess what else I got her?  I had to smile when I clean Mackenzie's room...remember the angel wings?  Without remembering them I had gotten Abigail some this year.  She loved them. 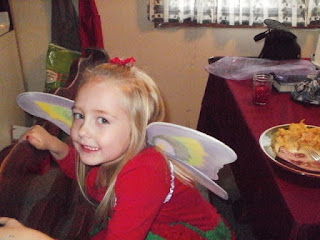 She isn't into posing for pictures...yet.  I think that's Jack in the background, asking if she's going to eat that...

4 year old's simply tell you the most amazing things.  All true, nothing censored,  from their point of view.  You would be surprised at some of the things you learn, you should talk to one today.

She achieved Master Sprinkler status in a few hours, as she has so much sprinkling to do she had bottles in both hands, sprinkling for all she was worth. 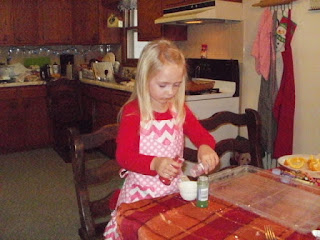 Putting sprinkles into a cup gives you a nice mixture of red and green because let's face it:  who can ever decide between them?  And why should we have to choose?

My Bonus Daughter, her mom, sweet thing that she is, insisted we go "do something" during the week I had off.  This is one of the things I love most about my bonus daughter--she actually thinks of me and is willing to do whatever it takes to spend time with me.  She spreads sparkles wherever she goes, just like her daughter.  We met at high noon at a bowling alley and bowled a game.  We all had a great time, even though we are by no stretch of the imagination great bowlers.  It had been entirely too long since we had eaten at a bowling alley, too, as real bacon cheeseburgers and tenderloins were to be had for very reasonable prices.  It was a good day! 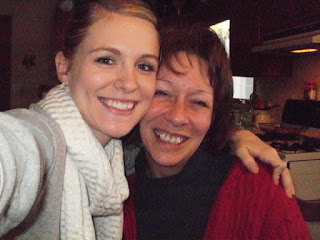 She is also young enough to grab up the camera and takes lots of pictures without focusing up our noses.  Just one skill I covet..... 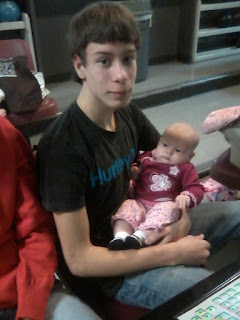 Everybody got plenty of practical and appreciated gifts, me included.  I got the warmest, softest new robe and slippers from the kids, which kept me all warm and snuggly, and this necklace I got for myself.  I LOVE it! 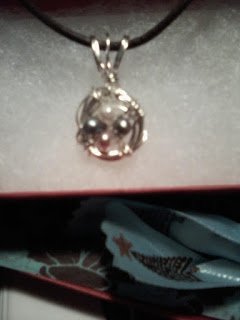 By ReBlinged.  You can find them on FB also.  They take vintage items and give them new life.  This is my version of a mother's ring.

I don't know if you remember or not but I vowed that my presents would be hand made this year at some point.  I did not say they would be hand-made by me, so the apron and the necklace still count.   But I did pretty good with what skills I have to work with and little time.

We made LOTS of candy.  By far the most popular were the peanut butter balls.  Take 24 Nutter Butter cookies and crush 'em.  Mix with 8 oz. cream cheese, roll into balls, throw the balls in the freezer and then dip them in chocolate or almond bark.  Very good.  Tip: try to keep the balls small.  I have no patience and as a result my truffles ended up taking four bites to finish.  Two bites is about right. 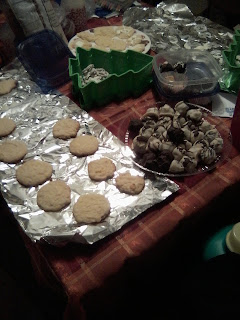 It looks great, doesn't it?  None of it was hard.  Check out Kraftfoods.com and you too will feel like a wizard in the kitchen.  (Even if you didn't get a Snuggie-but if you did--watch the sleeves!) 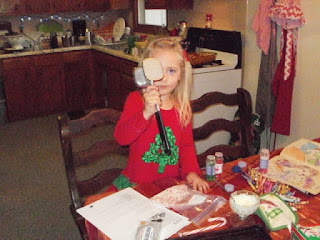 And in the interest of trying to survive without being able to get into a Dr., I came up with this: 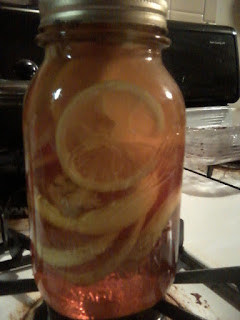 Everybody went crazy for this stuff. * Some of them were actually  sick.
I found this on the blog http://HomesteadingSurvivalism.com, which I will have on my blog list soon.  They are redoing their website presently.  Check them out.  I  really like them.   For this I just cut up 2 lemons and about 2 finger-lengths of ginger root and then fill the jar with honey.  You are supposed to let it set, stirring each day until the honey and citrus makes a jelly.  Take a spoon or two of the jelly, add boiling water, and you have a tea that will help you when you are sick with a cold or flu. It's wonderful!  You can also add some whiskey for an actual  Hot Toddy.  I finally figure that one out!  One of the recipients was so sick that he did not bother with making the tea, or even the Hot Toddy, and just ate it by the spoonful.  He reported that it helped a lot and wanted more in just a few days.  I found some pint jars on sale and it was a hit.

My list for hand made (by me) presents is growing for next year.  Next year I will be ready!!  I know I've said it before but this time I think it's really going to happen.  Between the candy, cookies, remedy's and easy little projects that even I can do, it's going to happen.  After this, our memories will be about time spent together, good food and drinks, and the time we spent, instead of who got what.  It's not a competition and whatever you get someone, the worth should rest in the fact that it's from you instead of what it is.  This checking boxes off of lists stuff has got to stop.  I have grown up, so much so that there is no longer any question.  What a relief.  I think the days of questioning myself are finally over, happily, and it feels really good to know where I stand.  So much of our youth is spent thinking we know what we think and then being slapped right upside the face with a complete and total opposite truth that we just hadn't lived long enough to learn yet.  Young people, this is how people can stand to get old.  It's like a soap opera, we have simply seen it all before.  It's pretty hard to scare us, if you want to know the truth.

I'm done with Christmas being more about presents than it is about Christ.  I'm done with people who say Happy Holidays.  You could say that on Veterans Day!  I'm done spending money I don't have for things people don't want, need, or like.  How much stuff do you need to have before you have "enough" anyway?  That is a question we should all ask ourselves, and if you still feel greedy after that, just think about how much you will have to "maintain" or "dust" this "stuff".   Is it so precious to you that little kids can't be in your house?  Isn't it going to get broken or be obsolete with a few years?  What is the point of that crap anyway? The days when your children are small pass quickly, however hard that may be for you to believe now.  They will remember the times together, messes, blow ups, and all, and they will remember it as the best times of their lives, regardless of the "stuff" they get.  Treasure the days when they like the box better than anything that could be inside, and make sure they hang onto that bit of wisdom that they are here to teach you.