On the day she was born, I got up at 4 am and headed to Columbia to meet her mother and her friend at the hospital.  The stars looked like diamonds in a soft black sky, and Venus was shining down like a spotlight in the eastern sky.  I even drove right to the hospital and found the main admission desk without any trouble, which is kind of a big deal.  I always leave myself enough time to make a few mistakes, but there was no need for that on this day.

They broke her mother's water at 7 am and she was very explicit and clear with her Dr. and nurses that she would not be having an epidural.  Her exact words were "nothing to do with my spine", accompanied by hand actions that mimicked the shape of a spine.  The Dr. and nurses were very supportive, and the nurse even got excited that she would get to see a natural birth.  Isn't that the craziest thing you ever heard?  Unless you are over the age of 40 it probably is not, and we are poorer for it, in my opinion.  I have high hopes that "natural birth" will be making a big comeback, as out-of-favor as it has fallen.

The next 3 hours we spent walking very fast for 40 minutes, followed by 20 minutes  on the monitors.  I was seriously impressed with how fast that girl could walk!  She even bounced with every step she took and did stairs!  I admit she lost me on the stairs.  I was winded after about three flights up and down a couple of times.  Plus, I admit the friend and I were trying to talk.  We were quickly left behind, and I told the young girls to carry on.  I would just be right there when they came back down. We went through 3 rounds of walking for 40 minutes and resting for 20 before that girl slowed down and the labor picked up.  Once she started stopping for the contractions and random nurses started asking if we might need a wheelchair (which she always refused) I knew we were getting into the thick of it.  (also, it was the most intense workout I have had since I picked up all the riffraff from the roof.  My legs are still sore-but in a good way now.  The first couple of days I felt like I had been hit by a train.  Or maybe just laid 50 feet of train track single-handedly.) 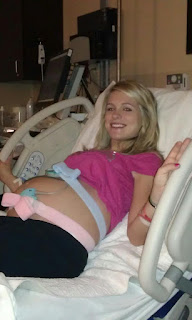 One determined mama!
Once she quit the walking she just sat on the edge of the bed, not wanting to be touched and not really moving.  I worked on her breathing, which she said helped a little, and she did eat a Popsicle at one point but she wanted no ice chips and did not even hurl any verbal abuse.  At one point she started to cry out, and then stopped herself.  I told her there was nothing wrong with making a little noise, and that she certainly would not upset anybody there by doing that.  She just grinned.  Grinned and bore it.  What a woman!  Don't get me wrong, she was in pain, and at a certain point panic started winning.  She agreed to what the Dr. termed a "baby dose" of Nubane, (no clue how to spell that one-sorry) which would knock the pain down a little and would wear off within about an hour.  It turned out to be exactly what she needed to get her over the hump of what would turn out to be her last hour of labor.  Reading it, it sounds like her "last hour of labor" was a small thing, but believe me, it is no small thing.  It's one of the scariest, longest, hardest hours anyone ever lives through.  My best advice is to never mention any one's last hour of labor lightly, or as if it's almost over, unless you want to be kicked in the stomach (at the very least).  Just in case you ever find yourself in that position, being in labor is to live from one moment to the next, and each one seems never-ending.

By that time she had gone from a dilation of 4 to 7 and it was time to call Daddy to come!  I left to meet Daddy and get Abigail, who was very excited to be a big sister!  I was very excited too.  I wish I had video of Daddy coming through the hospital doors.  He was stepping lively with a car seat under one arm and an eager 4 year old angel attached to the other.  Clearly, this was a man on a mission.  Abigail and I headed to the cafeteria to have a Popsicle.   We had no more gotten them opened and taken a bite than Daddy called and announced "7 lbs., 4 oz., 20" long" in the most proud and pleased voice I've ever heard.  "Oh!  We are right downstairs in the cafeteria!", I said.  He said "Come on up!"  And we did. 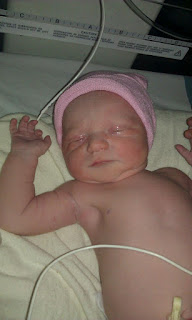 One perfect baby girl
Abigail was not getting rid of her Popsicle, but to hold it took both hands.  I tried to just drive her down the halls with my hand on her back. I freely admit she didn't walk fast enough for me, so I just picked her up, Popsicle and all.  Some Dr. behind us heard me tell her I loved her and he came up even with us and remarked "I'd say!  Carrying that big girl around!"  I just smiled and said "She has just become a big sister and this is probably one of the last times I ever will carry her."  He looked at her, looked at me, his eyes kind of teared up a little, and then he said, "Well, carry on."  So I did, Popsicle, angel and all.

When we got to the room, the baby was nursing.  Abigail was not too happy about that, she wanted to hold her right away, but she was content to sit next to her mother and stroke her sister's soft skin.  They did all the newborn testing right in the room a little while after that.  I was so happy to have the chance to actually check out a newborn, up close and personal.  When my own babies were born they were whisked away from me. Just across the room, but I didn't get to see anything.  I held Abigail and explained what the white, waxy coating was, why there was a little dried blood on the baby, and -------the umbilical cord.  Abigail was VERY ALARMED that something was wrong!  So I explained that she had had one just like that when she was born.  So had Mommy, and I, and, well, everyone who had ever been born. 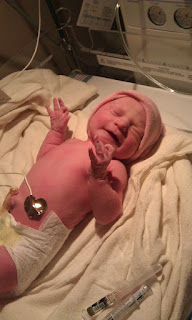 "No, honey, your baby sister's inside will NOT leak out of that thing on her stomach...."
It wasn't too long until we left for the evening to spend it watching Disney movies and making frozen pizzas and pre-made cookie dough.  My own Beautiful Redhead came with us and it was pure heaven.

The next morning, when I was doing my hair under the close scrutiny of Abigail, she looked at me with those big blue eyes and pronounced "You have Dora hair."  Dang if I don't!  LOL   4 year old's have such clarity and honesty, who could ever resist them?  Want to know what's going on?  Ask a 4 year old, but only if you really want to know.

The next day Abigail got to hold her baby sister, and shortly after that, the entire family was able to go home. 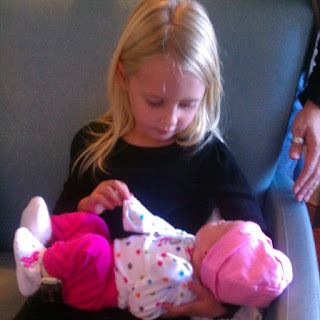 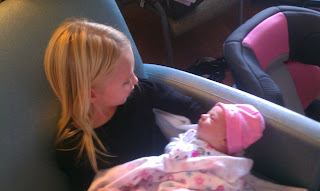 Their first good look at one another.  Alone at last!  There are things I need to you to know!! 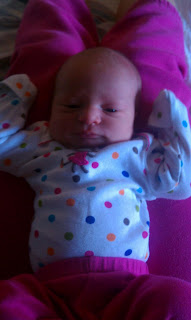 Let's roll, folks.  I got all dressed up and everything.........
Everyone is doing very well.  Her mother reports that Abigail firmly announces "It's my turn" every time anyone holds the baby, and that "baby sister" has quickly replaced "Mommy" as the center of Abigail's world. 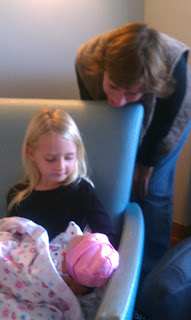