Last night I got my beloved Abigail Lea for 3 days and nights.  Immediately upon entering the house she caught sight of her apron and pronounced that it was hers.  I agreed.  She asked me to put it on her.  I did.  She wore it all night and then insisted on sleeping in it.  I thought this would be too confining, but danged if she didn't sleep in it and it was the first thing she thought about when she woke up.  Three year olds are amazing.  I happened upon this apron at the Salvation Army one Saturday and picked it up for 50 cents.  The ones I had were way too long for her, but this one was perfect and will be for several years, until she grows into mine. :)  You hardly see aprons anymore, so you have to pick them up when you find them! 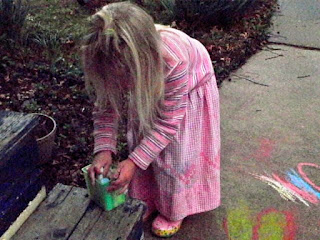 She has the cutest little boots, which luckily coordinate quite well: 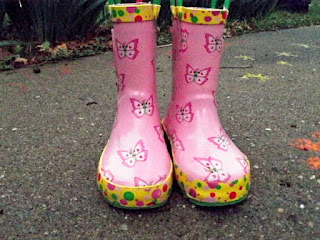 These boots, in addition to the apron ran down the water in the gutter for awhile this morning while Mimi was unconcerned about what time it was or whether anyone was getting dirty.

I took vacation for this and I needed it.  For three days I do not have to deal with government agencies or bill collectors illegally calling businesses in search of, well, who knows what.  Instead, I get to be Mimi for the next three days and do stuff like this: 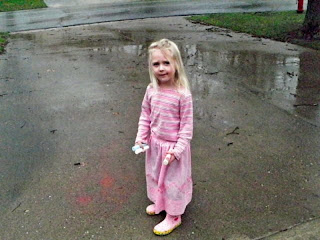 Other than getting the boys to school on time and roughly feeding kids at least a couple of times a day, all I have to do is stuff like this: 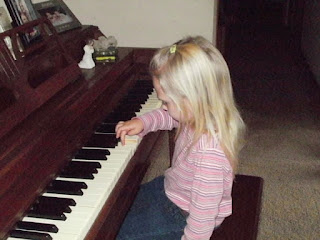 And keep the apron clean, naturally.  Today it has already been washed twice.  The first time I told her to put it in the dirty clothes I discovered later that in Abigail's mind that is the dryer.  I found a couple of half-dry towels in the clean laundry basket TWICE before I figured out that she equated "dirty clothes" with dryer.  LOL  It made a certain kind of sense. 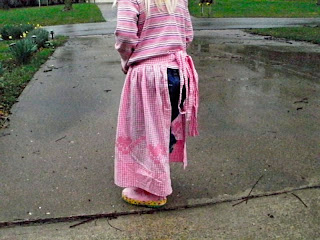 This was my view for most of the day.  We also made a pink lemonade cake with the same kind of icing, which was a big hit, and homemade pizza for supper.

From such simple things come peace and happiness for me.  A three year old child is old enough to give you a very good picture of what you are to them.  I think you have to get older before you realize that one of the best things you can ever be to a child is THE SAME.

I think what Abigail loves here so much is that everything is always the same.  She will point to the sink and tell me that I used to give her baths there.  Which I most certainly did. She marvels at how small she must have been there, as she admits to not remembering it.   Then she says "I not a baby now, but I used to be."  Yes.  She is now a girl big enough for her own apron to catch soap suds, flying cake mixes, and tears.  She knows so much already and I know she is going to know so much more.  The most important thing to me is that she already knows where everything is in this house, what will happen here, and what will never happen here.

I will probably get in trouble from her mother, but tonight she was weaving some incredibly detailed story about how bad guys were after us and we had to hide. She wanted me to get up off the couch and go hide somewhere and this sounded like a lot of trouble to me.  So I told her there would be no hiding from bad guys in this house, pulled out an imaginary gun and shot the bad guys instead.  She thought that was a fine idea.  And honestly, I have to agree:  it does make a lot of sense.   Then she gave me a high five and told me we were the TEAM and we had WON.  Dang straight!!

Today I spent most of the day chasing apron strings.  Tomorrow, if it doesn't rain, we have a date with a pond and some horses.  Whether she will be wearing apron strings remains to be seen, but if she is I am sure it will come in handy.
Posted by Momiss at 3/21/2012 08:24:00 PM