You say you need a doghouse?

A couple of years ago a friend of mine had a much loved lab who found herself expecting puppies with a boxer.  She had 8 beautiful puppies.  When I went over to see them, and was asked if I wanted a puppy.  I firmly stated that I needed a puppy like I needed a hole in the head.  Then one of those sweet little things wandered over to my foot.  I leaned down and scooped it up.  It sighed, long and lazily, and snuggled up to my neck, and I was lost.  I felt this little thing had picked me.  It was a boy and before I left that night I was signed up.
Before it was all said and done, we ended up taking two.  A boy and a girl.
The kids were thrilled.
The cyclist was appalled.
I was not intimidated, knowing what puppies entailed, and also knowing that having two little ones is actually easier in many ways than having one.
I bought kennels, pillows, bitterspray, odor eliminator, food, oatmeal shampoo and many, many chew toys.
The kids were thrilled.
The cyclist was still appalled.
I was not really discussing this subject with the cyclist at this point.
Then one night as the Cyclist made his point about what dog food cost for the 120th time, I casually said "I'm thinking about calling that little boy dog Jack."
"That's what I was thinking of naming him!" the Cyclist replied.
I smiled, and said "Then I guess it 's settled."
And so our family grew to include 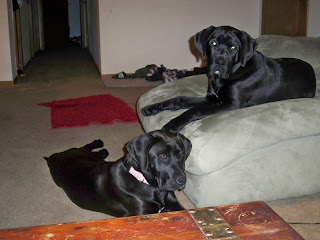 Jack and Shadow
So, this year for Christmas the Cyclist thought they needed a house.  And not just any house, either.  This house had to be big enough to two dogs, with room for them to stretch out, like he knew they liked to do.  The Cyclist has the most wonderful father in the world, who happens to have his very own woodworking shop and a lot of time to work in it.  Now, as far as I was concerned, a very basic box would work just fine.  I even had some plywood and shingles and stuff in the garage and sent all that over for them to work with.
I did not know who I was dealing with.
These two men, who are not carpenters, proceeded to build a doghouse that is hands down nicer than my actual house in almost every way.
I want you to look at this: 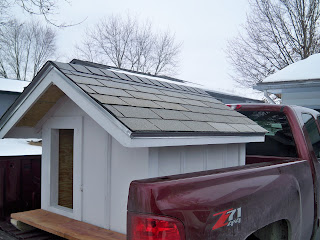 It filled the entire bed of the truck.  Note the deck on the front.  It is made out of cedar.  It is also fully and completely insulated, in addition to being finished on the inside.  You could put up wallpaper on the walls, if you wanted to.  The exterior boasts trim, which was added at the suggestion of the Cyclist's angel mother, so that it "wouldn't look like just plywood."  It certainly doesn't, does it?
We had the dogs a house.  And what a house.  All that remained was to get it unloaded.
Well.
That was quite an ordeal, as we could not get a gate out of the ground to back the truck up.  So 4 of us had to work together to get the new doghouse moved about 50 feet.  Not far, piece of cake, right?  It would have been, except for  a length of solid ice right at the fence where we had to unload it, and the fact that the doghouse weighed about as much as a piano.
Now, I only say this because I have had to move a piano once.  I can not tell y ou how many pounds a piano weighs, but I can tell you that it is a LOT.  And this doghouse weighed about the same.  And we had to move it, over ice, without having anyone fall down and be crushed by the sheer weight of it all.
All I can say is that God must have been watching over us.  We did it.  We did it while the Cyclist was considering things from all angles and wasting time in the freezing cold trying to "make a plan" while I was barking out orders encouraging everyone to snap to and let's-get-this-done-because-we've-come-this-far-and-we-can't-stop-now-but-my-LORD-be-careful-because-if-any-of-us-fall-it-will-KILL-US!
And we did it.  No one fell, no one even said any bad words, and it was done.  We filled it with hay and while I can't say it is big enough to hold both the dogs and the Grand Finale, I can say truthfully that it is plenty big enough to both dogs and 1/2 the Grand Finale.  The other half opted out of getting in.  I think he is old enough to be considering his dignity or something.  Isn't that sad?  I'll miss having "boys".  They are growing up so fast. 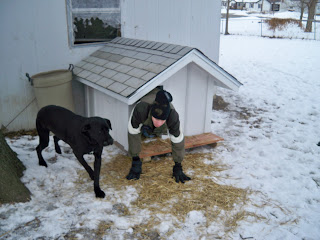 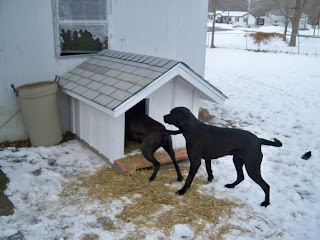 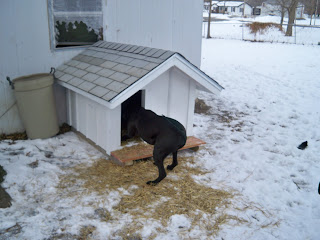 Jack and Shadow have never had it so good.  They seem to know not every doghouse has a cedar deck.
And while I was more interested in the Cyclist spending some time with his dad, I have to say that this turned out really well for everyone concerned.  For one thing, it's completely changed my concept of "doghouse".
You never know what you can make out of odds and ends that have been laying around in your garage for years.  You never know what stories you might hear if you take the time to spend time with your parent's on any given day.
Don't forget that we all make stories all the time.  Remember them.
I, for one, can tell you that none of us will ever forget unloading that doghouse.  I'm pretty sure we will think long and hard before ever moving it again, either.
I have the strongest feeling this doghouse will be around for many, many years to come.
Posted by Momiss at 1/30/2011 09:06:00 PM